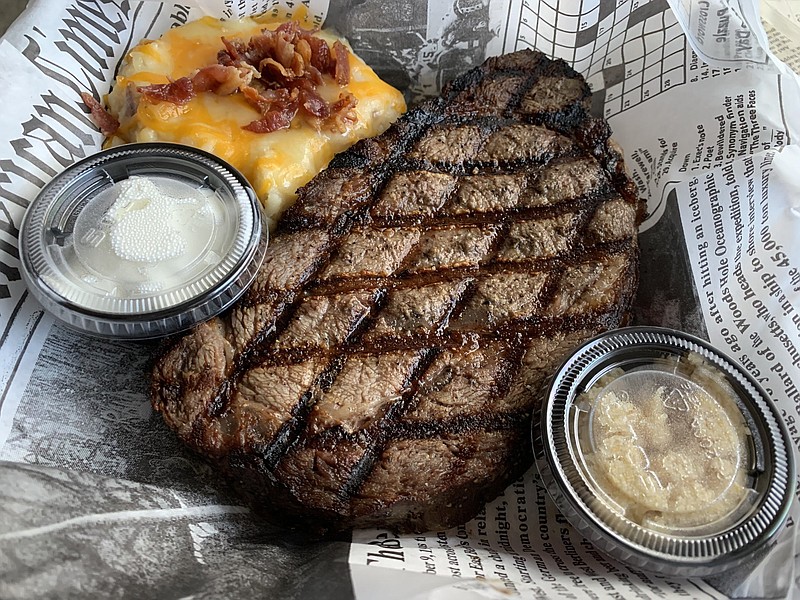 Restaurateur Ira Mittelman, best known for his eponymous restaurant ventures — the short-lived Ira's on Main Street (now Allsopp & Chapple) and Ira's Park Hill Grill in North Little Rock (now North Bar) — has been hunting around the Little Rock area for a place to open another restaurant, and he's found one.

He's the new chef at the Holiday Inn, 10920 Financial Centre Parkway, Little Rock. The restaurant will be named Fork, and he said last week if he can hire the bartender he's looking for, he'll open Tuesday, serving breakfast to guests, with the bar opening at 4 and the restaurant open 5-10 p.m., five days a week to start, expanding as he can increase his staff. Fork will have an "Ira menu," which in the past has meant high end but with Southern touches. Mittelman says the kitchen operation is small — "I can touch every plate," he explains, including room service. The hotel phone number is (501) 225-1075.

Jones Bar-B-Que Diner in Marianna reopened last week, almost three months after fire damaged the pit area, with legendary, award-winning owner and pitmaster James Harold Jones, 76, cooking on a new portable barbecue grill until he gets a metal building finished around his barbecue pit behind the diner. The Feb. 28 fire destroyed his wooden barbecue pit structure and damaged the diner building, built in 1964. It is "one of the oldest African-American-owned restaurants in America," according to the James Beard Foundation, which honored the diner with an America's Classics award in 2012. Fans raised $87,000 via GoFundMe and Southern Restaurants for Racial Justice sent him a $25,000 emergency grant. "I was surprised to see how fast they put that money together and sent it to me," said Jones to the Democrat-Gazette's Bill Bowden. "Even from Australia. They were in on it, too." According to Jones' Bar-B-Q's Facebook page: "Hours are 7 a.m. until the food runs out. There is NO MENU. All Jones BBQ Diner serves is a pork BBQ sandwich on Wonder Bread." The sandwiches still will cost $3.50. Soft drinks are $1. The phone number is (870) 295-3807.

Boulevard Bistro, 1920 N. Grant St. Little Rock, announced via its Facebook page (facebook.com/boulevardbread) that it will reopen for dine-in dinner service, Friday and Saturday, starting Friday. The phone number is (501) 663-5951; the website is boulevardbread.com.

Shorty Small's, 11000 N. Rodney Parham Road, Little Rock, joins the ranks of area restaurants taking extraordinary steps to hire personnel, including an email blast to patrons proclaiming: "It's a LIE! Don't believe the talking heads on TV. You can make much more money working at Shorty Small's than staying at home. [Shorty's] is Now Hiring, paying some of the highest wages in the industry!" There's a phone number — (888) 980-8162 — to call for more information call, and a link — adilo.bigcommand.com/watch/l8FHXr9W — that takes you to a video and a a job application.

Benton-based husband-and-wife chef team Serge and Mary Krikorian, owners of Vibrant Occasions Catering and Our Mobile Kitchen, have a new YouTube cooking show, "Cooking with the Kriks!" (youtube.com/channel/UCoFQs8NabCWKtetd0IVB-hw). "Each episode will feature a local celebrity guest, influencer, entrepreneur or interesting person in the community," according to a news release, who "chooses what dish is cooked on the show," while the show passes along "the gift of how to cook like a chef."

Historic Arkansas Museum celebrates the tomato with Scott Rains of Table 28 on a special Zoom program with its second 2021 "History Is Served: Arkansas Foodways Dinner Series" dinner, 4-9 p.m. June 17. Guests will pick up dinners curbside 4-6 p.m. at the restaurant, in the Burgundy Hotel, 1501 Merrill Drive, Little Rock. Tickets are $60, $50 for museum members. Visit bit.ly/3wfjd4u. The dinner series is a program of the museum's Arkansas Foodways Initiative. The third dinner, August date and chef TBA, will focus on corn; for the Oct. 21 series finale, Jonathan Arrington and Jack Sundell of The Root Cafe will spotlight "The Apple."