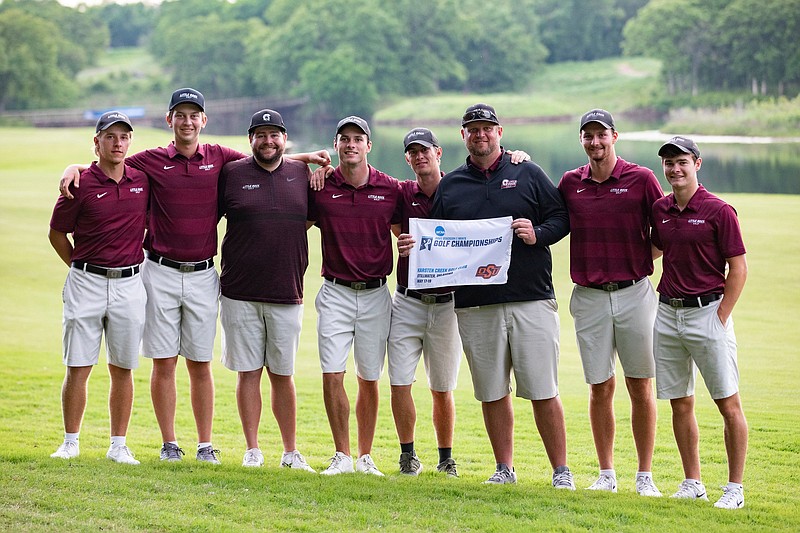 As he stood over the most important putt in the history of the University of Arkansas at Little Rock's men's golf program, Magnus Lomholt thought about cheese fries.

Moments earlier on the 18th green at Karsten Creek Golf Course in Stillwater, Okla., Lomholt's heart raced as he considered the 3-footer in front of him. Unlike the rest of his teammates, he had no clue that the Trojans' first-ever trip to the NCAA Men's Golf Championships hung in the balance.

"I did not know exactly what it was for," Lomholt said of his putt. "But I knew it was important."

So while the sophomore from Denmark anxiously waited for the other golfers to putt, UALR assistant coach Patrick Sullivan asked Lomholt the only natural question there was in that particular moment: What appetizer was he going to order at Texas Roadhouse that night?

"I wanted to take his mind off the putt," Sullivan said. "The last thing he needs is to be thinking about this putt to send us to the national championship. He looked at me like, 'That's a weird question', but it let him reset and lock back in."

They settled on cheese fries.

With bacon bits and melted cheese on the brain, Lomholt confidently sunk the putt. His birdie marked five straight for the Trojans to complete an improbable comeback past Auburn and Baylor at the Stillwater (Okla.) Regional, and sent the program to the NCAA Championships for the first time in its 29-year existence.

Karsten Creek Golf Course's holds its own storied history,but it became permanently etched in the lore of UALR golf on May 18. Lomholt's birdie on the 551-foot, par-5 18th followed birdie finishes on the final hole from teammates Nico Horder, Marcel Rauch, Logan Pate and Anton Albers, clinching the national championship berth by one stroke on a day that began with the Trojans six off the cut line.

Today, UALR begins the first of three stroke play rounds at the championships at Grayhawk Golf Club in Scottsdale, Ariz. The Trojans will set a program benchmark competing in Arizona, but the team already holds a place in school history, ensured by Lomholt's final putt on the 18th hole in Stillwater last week.

"It's probably one of the best comebacks I've ever seen in golf," Albers said.

Here's how it unfolded:

A 9-over team performance across two rounds on May 17 left the Trojans in eighth place entering the final round, distant enough from the fifth and final qualifying place to be paired with Auburn and Ole Miss, but still in range to cut the six-stroke gap.

That chase began treacherously after a two-hour weather delay as UALR shot 12 over on the front nine.

Players on the course were unaware of their standing, and UALR Director of Golf Jake Harrington avoided his phone until the 15th hole. When he finally checked the leaderboard, he found the Trojans still only six shots behind fifth place, and as each of the players made it to the par-3 15th, Harrington met them with a message.

"Cut one more stroke for me in this next stretch from 15-17, and whatever happens on 18 happens," he said. "At least then we have a shot"

Pate and Albers each delivered, carding birdies on the 15th while Lomholt recovered from an errant tee shot to par the hole. As the trio embarked on the next three holes, Horder reached the 18th tee box and the turnaround began.

"And then I had the worst swing of the day," he said.

Sitting 277 yards from the hole, Horder sent the second shot left with a 4-iron in his hand and found his ball sitting in mud more than 25 yards away from the green and feet away from the water.

Horder made use of a backstop on the green to roll his chip to 6 feet from the cup and finished out for the first crucial birdie. When he walked off the green with a 74 for the day, he and Sullivan had their confidence bolstered by an Auburn shot that sailed into the water.

"When I made the birdie I knew we were still in it," Horder said.

Rauch stepped up to the 18th tee fairly calm for a golfer riding three consecutive bogeys.

The live scoring told him he was in the clear. While each team at the regional started five golfers, only the top four counted toward the team score. Rauch -- who shot an 84 -- was off the hook.

After deliberating on the fairway, Rauch reached for his 3-iron 270 yards from the pin and placed an incredible second shot 15 feet from the hole. He birdied after missing the eagle putt. The result held no bearing, but looking on from the 17th green, it filled Pate with fuel.

"Marcel's second was was one of the better shots I'd seen all week," Pate said. "I was thinking, 'Well if he can do that, I can probably do that too.'"

Pate and Albers each found the fairway on the 18th hole but took different approaches to secure their birdies.

Pate already had a club in hand when Sullivan challenged him to go for the green on shot No. 2, knowing the Trojans were creeping up the board. Pate shook him off.

He laid up to 85 yards from the hole, and the next shot took Pate to the green where he finished in four.

Albers, with some urging from Harrington, took a more aggressive approach. Uncertain if he should go for the green or lay up, Albers turned to his coach for guidance. Harrington had a question.

"Can you pull this shot off 8-10 times?," Harrington asked. Albers felt he could, and then he did, placing his second shot 65 feet from the hole.

Albers rolled his first putt 22 feet beyond the cup and watched it settle on the fringe. Then, as Albers measured the next shot, Auburn's Alex Vogelsong made a 55-footer -- on the same line as Albers' putt before it -- for an eagle as the crowd around him erupted.

"All the Auburn players and spectators got very loud," Albers said. "The coach ran up onto the green and stared hugging him. They acted like it was over."

Albers regained his composure amid the chaos and holed his putt, UALR's fourth consecutive birdie. His shot put the Trojans one shot behind Auburn, and level with Baylor on the other side of the course.

"It felt like we had the momentum," Sullivan said. "Then I saw Jake walking to the edge of the water. I thought Magnus had hit his ball in the water."

Lomholt didn't go in, but he wasn't far off.

"My ball was about two steps from the water," he said.

Fortunate to have stayed dry, Lomholt stood 225 yards from the hole and pulled out his 3-iron. Harrington pulled it back.

"I knew how amped up he was," Harrington said. "I told him, 'You have too much adrenaline going through you. You're going to smash this,'"

So instead, Lomholt grabbed his 4-iron, and smash the second shot he did to 40 feet from the cup. His first putt left him just a feet away from the birdie, and just when the nerves of the moment were hitting, Sullivan came to Lomholt with a burning question.

"Patrick asks me, 'So what are we having for appetizers later?'" Lomholt recalled.

Unaware of just what his next putt meant for the Trojans, Lomholt stepped up with fried potatoes on the mind and drilled it.

"As soon as it fell, everyone went crazy," Lomholt said. "I pretty quickly realized what happened."

UALR still had to wait on Auburn's Andrew Kozan to finish. He made bogey, vaulting the Trojans into fifth-place.

Shortly after, the Trojans posed with a flag that read "2021 NCAA Men's Golf Championship" just off the 18th green -- a symbolic ticket to this weekend's championship -- and soon the celebrations on the course were over.

Then it was time for cheese fries.

UALR at a glance