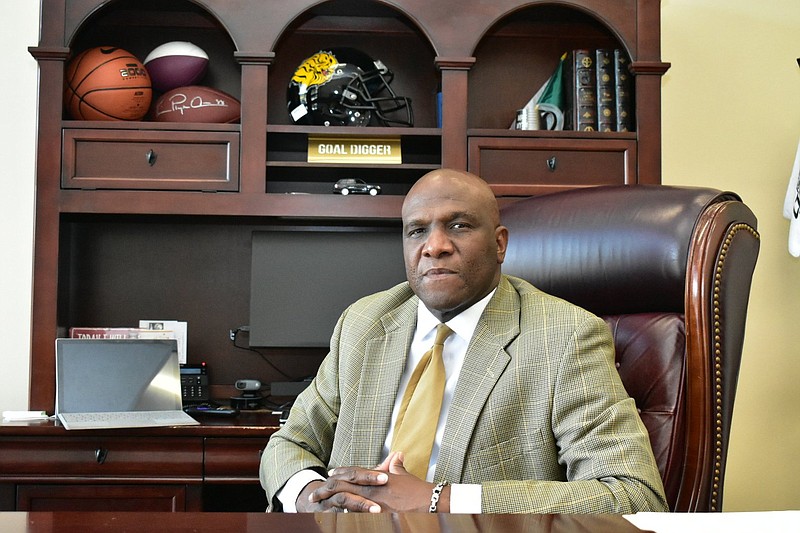 Two of the most important jobs in the University of Arkansas at Pine Bluff athletic program are still open, although Chris Robinson holds the top position in the interim.

Robinson is still a candidate for the permanent athletic director role and has guided the athletic department through a season of uncertainty given the covid-19 pandemic. The Golden Lions have rewarded him well, winning Southwestern Athletic Conference Western Division titles in football and women's volleyball, as well as capturing five individual SWAC outdoor track and field championships, all in the three months he's taken over for the retired Chris Peterson.

Robinson, a former UAPB quarterback and assistant coach, said he's "very limited" to what he can say about the full-time AD position, but adds he likes where the athletic department is headed.

"I would hope I have this opportunity full-time," Robinson said. "We've been talking a few months, but to be honest, I'm very limited as to what I can say. I think we've got to continue to grow and we've got some things we want to put together as we build a foundation, but Chancellor [Laurence B. Alexander] is going to make the best decision for the athletic department and the university. Like I said, I feel good about where we are right now. Hopefully, a decision is coming out soon."

Alexander participated in the University of Arkansas System board of trustees meeting Wednesday and Thursday and did not immediately respond to a request for comment on the athletic director search.

While a timetable for naming Peterson's permanent successor has not been revealed, Robinson expects a head coach for the men's basketball team to be named "very soon," although he did not commit to a date for an expected announcement. George Ivory announced April 7 he would step down after 13 years at the helm.

"I'm excited about that group," Robinson said. "It's a very good group with a good pedigree, and they work extremely well together. They interviewed a lot of candidates – NBA players, NBA former players, NBA coaches, you name it."

Robinson did not specify any candidates.

UAPB increased its teamwork, Robinson said, in helping the traditional fall sports like football, women's soccer and women's volleyball complete their seasons along with the winter and spring sports teams. The SWAC and the university implemented covid-19 protocols to limit the spread of the disease, although an outbreak forced the conference to cancel the SWAC volleyball championship match between UAPB and Jackson State, awarding the title and automatic NCAA tournament berth to the latter.

"We received a lot of comments from other schools about how we handled covid," Robinson said. "Our protocols here, in some cases, are a little more stringent than others, but we were not as severely impacted as some other places were. Of course, it drastically impacted our volleyball team while we were off-campus, but I think our program here, our covid protocols were impactful. They were effective. I'll say that. We had a very well-put together program overall that was developed by the athletic department and the university as a whole. It took all of that to make it happen between the university, the UA System and all that to help make us successful with the overall program."

Robinson also touted the department's outreach to alumni and the community. The department has partnered with Cricket Wireless and Academy Sports and Outdoors to make donations to the Pine Bluff Parks and Recreation Department and Northern Cal Ripken and Junior Babe Ruth League, respectively.

"The committee's been very good to us and wanted us to build on that," Robinson said. "[Director of community relations] Cameo Stokes, his passion for the community and what we want to do to connect with the community, we're committed to being out there and being active at least once a month."

Roger Totten, the men's golf head coach and associate athletic director, said Robinson has brought a lot of energy and positivity that hasn't been felt in the department in a long time. Totten did not apply for the AD role.

"I've been fortunate to work under four different athletic directors," said Totten, who has held a number of positions at UAPB off-and-on for more than 20 years. "I've seen a lot come and go here, but I can say what Coach Rob has brought the program is energy and youth. That's very important this day and time, with technology savvy and good ideas. The light is very bright here. It's very bright."