Jenkins on making of 'Underground Railroad' 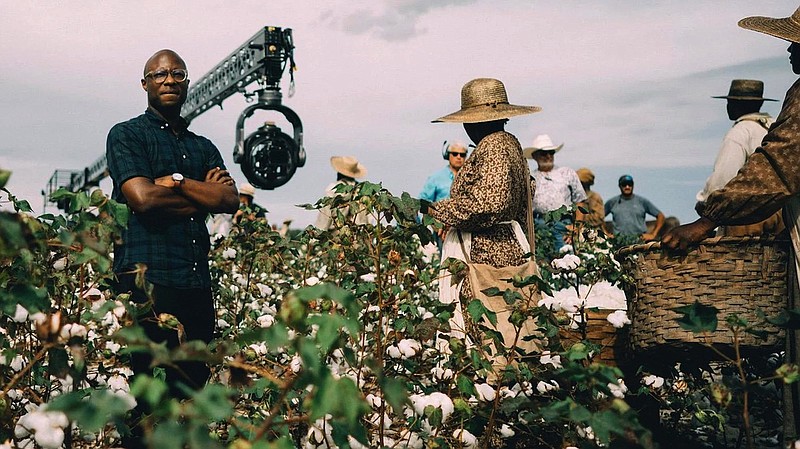 Barry Jenkins directs on the set of his 10-part miniseries for Amazon Prime, “The Underground Railroad.”

Director Barry Jenkins, who won an Oscar for adapting the screenplay for "Moonlight," might be happy his latest project, his miniseries adaptation of Colson Whitehead's 2016 novel "The Underground Railroad," now streaming on Amazon Prime, isn't coming to theaters.

"When you go into a movie theater, it's a very captive experience," he explains during a Zoom news conference. "You kind of have to surrender yourself. You're in the middle of a 30-seat aisle. Doing the subject matter (slavery), I wanted the audience to have the opportunity. You can pause. You can play. You can skip. You can choose whom you want to watch this with, or whether you want to watch it alone. So that was part of the reason why I felt like it had to be a series."

Jenkins doesn't want viewers imprisoned in the story. Despite the bigger screen and better sound of an auditorium, home viewers have some advantages.

Being able to take breaks may be essential to watching Whitehead and Jenkins' story because it concerns a young Black woman named Cora (played by South African Thuso Mbedu), who escapes from a brutal Georgia plantation through a series of subterranean trains placed by fellow slaves.

While Harriet Tubman and other operators of the real Underground Railroad came up with ingenious ways to help slaves escape their bondage, they didn't use the elaborate and metaphorical system in Whitehead's book or Jenkins' series.

"And I remember the first time I heard the phrase 'underground railroad,' I saw Black people on trains underground in a very grounded way. I just knew it was real 'cause as a child, you just don't have those filters that, 'Oh, this thing isn't possible. These people can't, or that thing didn't"; Jenkins says.

"So, when I first read Colson's book, I got this feeling again and even in the book, there's no trains levitating. The trains aren't flying in the sky. It's just that Black folks built them underground, and I thought, 'Oh, this is kind of dope.' And so, right away, I wanted to lean into this uncorrupted feeling, As we went through the process of making the show, the symbolism that the question refers to, the surrealism, all those things came out of these very grounded symbols."

While this interpretation has been dubbed a type of steam punk or even magical realism, Jenkins insisted the seemingly fanciful ideal not look imaginary onscreen.

"I told Mark Friedberg, our production designer, 'cause I'm working from this childhood memory, 'This can't be fake. I want real tracks, real trains, real tunnels. I don't want blue screen, and I don't want CGI," he says. "We found a private rail network, and we built our tunnels above them. So much of this project was trying to contextualize what it would've been like to be my ancestors, which is a very difficult thing to do just because of some of this history has been lost. When Thuso first comes down off the tracks, I said to her, 'I think you need to get on the ground, and you have to touch it. And not only do you have to touch it, you have to like bang on it just 'cause this is like if aliens came down, walked [to] your front door, and handed you a pepperoni pizza.'"

If making the trains that Cora takes to deliver her to potential freedom was a challenge for Jenkins and his collaborators, another is the fact that the director often adapts material that doesn't initially seem visual or cinematic.

Having read both Whitehead's novel and James Baldwin's "If Beale Street Could Talk," it's striking how Jenkins has managed to maintain the integrity of the books even though several pages are devoted to internal monologues the camera can't capture.

"The interiority is always a challenge when you're going from book to screen, unless you're bringing a lot of the book over in voiceover, and then that has its challenges. I didn't want interior voice in the show for a few different reasons," Jenkins says.

"I think it's all casting, man. You know, it's all casting because we can see things. When you read a book, you can't see anything. Because we can see things, I thought, 'Oh, there's interiority in the things the characters are choosing to take with them. There's interiority in the way the characters are choosing to present themselves."

"Reading the book, the one thing that made me nervous that I might not be appropriate, [is that] Ridgeway's described as big, giant. And I'm not a giant. I mean, I'm not tiny, but I'm not-certainly not a giant," he recalls.

Many of the principal actors like Edgerton and Mbedu hail from outside the United States. The press conference included British actors Aaron Pierre, who plays Caesar, who convinces Cora to join him on the railroad, and Member of the Order of the British Empire recipient Sheila Atim, who plays Cora's mother, Mabel.

If some of the cast were unfamiliar with the cruelty of the "peculiar institution," they were aware of the delicacy of the subject. Atim says, "There's a sequence where Mabel (who works as a midwife) buries the placenta in the garden, and that's part of the ritual and an act of rebellion as well because that is something that she would've brought with her from Africa. As you know, I'm not West African, and I'm not African-American. I'm East African, but I recently learned that that's also something that they used to do in Northern Uganda where I'm from."

Playing scenes like this can be hard on the cast. Jenkins recalls that in order to get the appropriate reactions from his actors, he had to give them breaks that the slave masters in the series would not.

When Benjamin Walker, who plays Cora's master, had an especially grueling scene, Jenkins remembers, "It's a hundred degrees, we're about to go. He takes out his phone. He lived in London. He's like, 'You know, I think it's about nine o'clock in London. You mind if I just call to tuck my kids in?'

"And the PA standing next to him was like, 'No, I'm sorry, Mister. We're about to go.' And I walked over. I said, 'Bruh, let that man go call his kids and tuck them in. Because once he's done with that, he's got to come over here and do these things.' And I knew it was to reaffirm to himself, I am this person, but now it's my duty to become this person. He just had to remind himself."