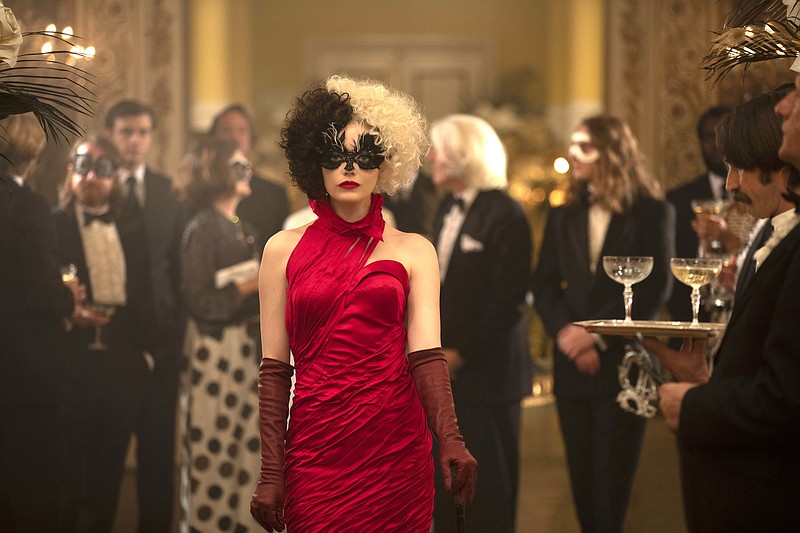 The origin story of a legendary villain is explored in Disney’s “Cruella,” which stars Emma Stone in the title role.

Whereas some classic movies now play on streaming services with disclaimers explaining that their content now seems troubling, you won't see one before "One Hundred and One Dalmatians" when it plays on Disney+.

Having seen the movie again last week, its villain Cruella De Vil seems even more heinous and creepy today. It was bad enough that she wanted certain death for adorable Dalmatian puppies, but her eagerness for a fur coat itself seems even more greedy and heartless today. Both you and any kids you might have will be eagerly cheering for her failure.

Finding out how she got to be so depraved could make an intriguing movie, but director Craig Gillespie and a quintet of screenwriters seem more intent on retooling "The Devil Wears Prada." Seeing "Prada" writer Aline Brosh McKenna's name in the credits makes the comparison seem even more obvious.

This time Estella, later Cruella, is less a bloodthirsty fashionista and more of a sympathetic misfit. That's not really a problem after considering that Orson Welles played the eerily amoral Harry Lime in "The Third Man" but played him as a likable rogue in a popular radio series later.

For the new take on the character, Emma Stone is an ideal choice. With her two-tone locks, Estella has no choice but to be different from her peers. After getting bullied by her classmates and losing her mother in an accident (her dad is absentee), she survives the streets of London by joining Jasper (Joel Fry) and Horace (Paul Walter Hauser, Gillespie's "I, Tanya") on their clever petty thieving.

Stone can effortlessly switch from conveying wide-eyed innocence to ruthless determination without seeming to break a sweat. Considering all of the striking outfits by Jenny Beavan ("Mad Max: Fury Road") Stone sports in "Cruella," that's an impressive feat for both women.

Like her late mom, Estella wants to design clothes instead of swiping loose change from well-heeled Londoners. Her dream becomes a reality when she lands a gig cleaning up a department store. After she tries to prove herself dressing mannequins (after having some help from alcohol), Estella earns a new career with the iconic designer The Baroness (Emma Thompson).

Gradually, Estella discovers that her new boss takes credit for the labor of others and has a management styles that's as tyrannical as Meryl Steep has in the previous movie Brosh McKenna wrote. She starts crashing the Baroness' parties and calls herself Cruella. The script is vague about when "Cruella" is set, but Cruella herself is like a late 20th century version of an Instagram influencer.

While she gets some help from a punk boutique owner named Artie (John McCrea), Cruella makes the Baroness miserable simply by sporting classier outfits and upstaging her. Making a living with her fashions doesn't seem like a priority for Cruella.

Watching both of the Oscar-winning Emmas going after each other is inherently delightful, and Gillespie stages several terrific set pieces. Watching Stone making The Stooges "I Wanna Be Your Dog" all her own is delightful, and it probably helps that Cruella actually likes dogs in this one. Her two canine costars are also astonishingly expressive and force the humans to up their game. We do find out why Dalmatians aren't her favorite as the film progresses.

Thompson can play icy without lifting an eyelash, and the intelligence she projects makes her a formidable antagonist. Outwitting the Baroness takes some effort.

Once the set pieces end, "Cruella" loses some of its bile and its sense of wonder. The story moves slowly and strains to hold its hour running time. The jukebox soundtrack features of host of familiar songs that aren't used in a particularly interesting way, although the new offering from Florence and the Machine is a nice touch.

Cruella must defeat the Baroness without becoming a monster herself. As a result, the conclusion seems more inevitable than involving. With "The Devil Wears Prada," there's a sense Streep's vices could overtake her subordinates. There are no doubts here.

It's probably a good thing Cruella no longer wants garments PETA would hate. But it's too bad she's not more fun.

Rating: PG-13, for some violence and thematic elements