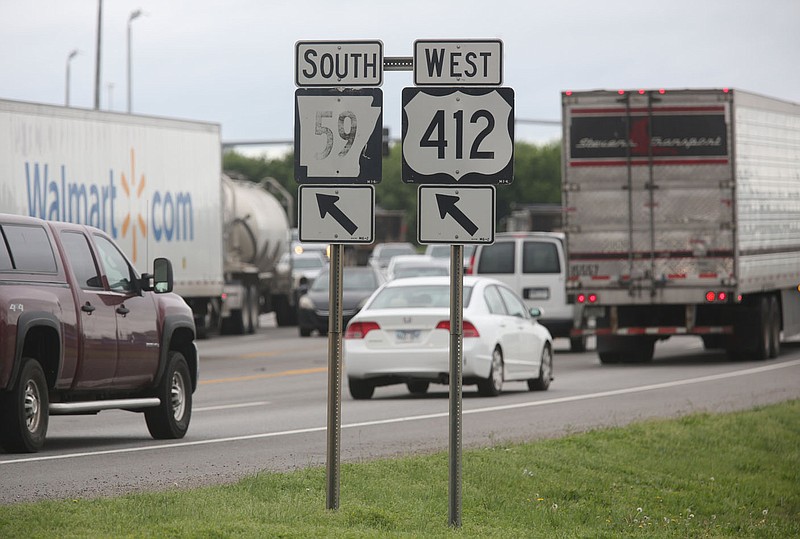 West bound traffic continues Friday, May 21, 2021 entering Siloam Springs on U.S. 412. Regional planners are being asked to consider joining Oklahoma officials in asking that U.S. 412 be designated a future east-west Interstate highway connecting north-south I-35 west of Tulsa to I-49 in Springdale. U.S. 412 is currently designated as a High Priority Corridor and a part of the National Highway System. A proposed resolution would ask Congress to designated the road as an Interstate Highway. Check out nwaonline.com/210523Daily/ and nwadg.com/photos for a photo gallery. (NWA Democrat-Gazette/David Gottschalk)

Northwest Arkansas regional planners are considering whether to support changing the designation of U.S. 412 from Springdale to I-35 west of Tulsa to a future interstate highway.

The Indian Nations Council of Governments in Tulsa, Okla., passed a resolution on May 11 seeking support from Oklahoma and Arkansas transportation and elected officials and then sent it to the Northwest Arkansas Regional Planning Commission.

"Connecting Northwest Arkansas and North Central Oklahoma will encourage economic development along this corridor and expand opportunities for employment in the region," Boozman said.

The Arkansas and Oklahoma transportation departments expressed support for the proposal in a letter to Inhofe.

"Northeast Oklahoma and Northwest Arkansas share historic, geographic, and economic interests and a future interstate designation will improve economic development opportunities for both regions while providing the state DOTs with sufficient time to fully upgrade the corridor to interstate standards," according to the letter signed by Tim Gatz, Oklahoma secretary of transportation, and Lori Tudor, director of the Arkansas Department of Transportation.

The highway would improve supply chain connectivity for major retail and industrial employers in the region, including Walmart in Northwest Arkansas and numerous energy and aerospace companies in Northeast Oklahoma, according to Indian Nations Council officials.

U.S. 412 intersects with I-35 about 80 miles west of Tulsa. Interstate 35 runs from Laredo, Texas, north through San Antonio, Dallas, Oklahoma City and Wichita, Kan., to I-70 in Salina, Kan. It continues on through Kansas City, Mo., Des Moines, Iowa, Minneapolis/St. Paul and ends in Duluth, Minn.

Rich Brierre, council director, said, "The designation of the U.S. 412 corridor as a future interstate will both enhance economic development for our region and improve travel safety between northeast Oklahoma and northwest Arkansas."

The designation change is not part of the Northwest Arkansas 2045 Regional Transportation Plan, which was approved earlier this year. It's also not included in the Arkansas Department of Transportation's highway plans.

"I wanted to bring this up to you, as the Technical Advisory Committee, because, obviously, this is new information," Tim Conklin, assistant director at Regional Planning, told the committee Thursday.

Conklin said the issue would be taken to Regional Planning's policy committee next week because U.S. 412 runs through the metropolitan planning area.

The U.S. 412 Northern Bypass from Tontitown to I-49 in Lowell is being designed and built to interstate standards and will carry the U.S. 412 designation when completed. The proposed access road to the Northwest Arkansas National Airport will take off from the bypass just west of Arkansas 112 and is also being planned as a limited-access highway. Widening U.S. 412 to six lanes from the state line to east of Siloam Springs is already part of regional plans.

U.S. 412 is a designated high-priority corridor from Nashville, Tenn., to Tulsa and is part of the National Highway System.

Since 1991, certain corridors in the country have been designated in federal transportation legislation as high priority. The designation helps either directly or indirectly to provide federal funding for improvements.

The future interstate designation authorizes the U.S. Department of Transportation to add segments of the corridor to the interstate system when certain criteria are met.

The resolution notes that significant portions, about 133 miles, of U.S. 412 between I-49 and I-35 have been designed and constructed to interstate standards.

The move would enhance connections for three interstate routes: I-35, I-44 and I-49. It would remove bottlenecks in interstate commerce, improve safety, reduce travel times and improve economic opportunities for both regions, according to the resolution.

Of the 60 largest metropolitan statistical areas in the nation, Tulsa is one of the few non-coastal cities with a million residents that does not have more than one interstate highway passing through town. In Tulsa, it's I-44. Northwest Arkansas also has only one, I-49.

The resolution notes U.S. 412 directly serves the major inland ports of the Tulsa Port of Catoosa and Oakley's Port 33 on the McClellan-Kerr Arkansas River Navigation System. It also provides, or will provide, access to Tulsa International and Northwest Arkansas National airports.

In Oklahoma, the Cherokee Turnpike would be incorporated into the route just as Will Rogers Turnpike, Turner Turnpike and H.E. Bailey Turnpikes are all designated part of I-44.

Regional planners said Thursday they want to hear from Arkansas highway officials and get their position before making a decision on whether to support the resolution.

"We also realize in Arkansas we have future interstate projects that still are not complete," Conklin said.

Arkansas and Missouri are finishing the missing link of I-49 -- the Bella Vista Bypass -- and that portion of interstate is expected to open this fall. There's also a missing portion of I-49 between Fort Smith and Texarkana to build.

Future projects include I-57, which would follow U.S. 67 from Little Rock north to Missouri, and I-69 in south and southeast Arkansas, which would enter Arkansas south of Magnolia and run northeasterly into Mississippi. The new portion of I-69 would connect Shreveport, La., and Memphis, Tenn. 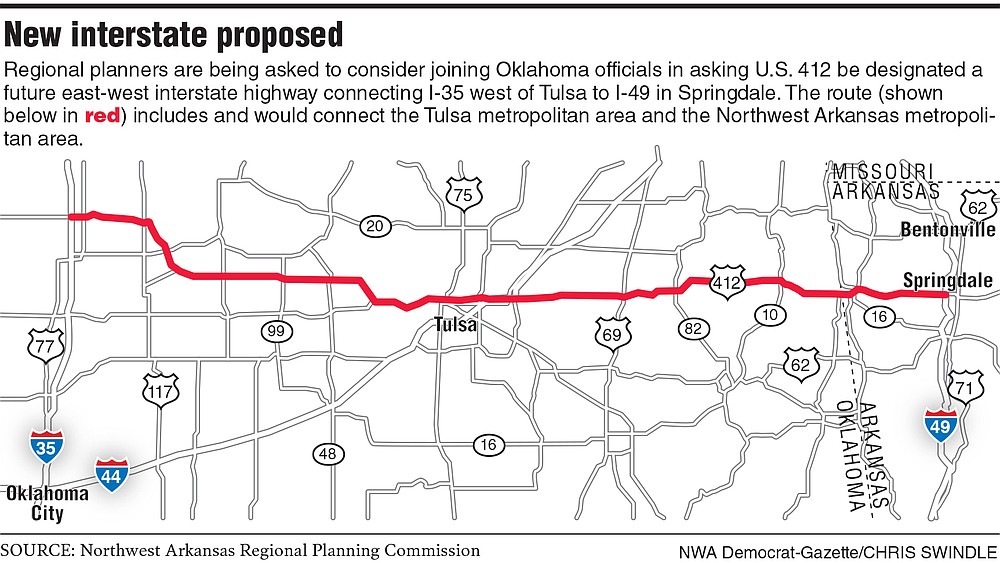 The Indian Nations Council of Governments is a voluntary association of local and tribal governments in the Tulsa metropolitan area. It assists in comprehensive planning, transportation, community and economic development, environmental quality and energy programs, public safety, and services for older adults. INCOG serves Creek, Osage, Rogers, Tulsa, and Wagoner counties, more than 50 cities and towns in those counties, and the Cherokee, Muscogee, and Osage Nations.