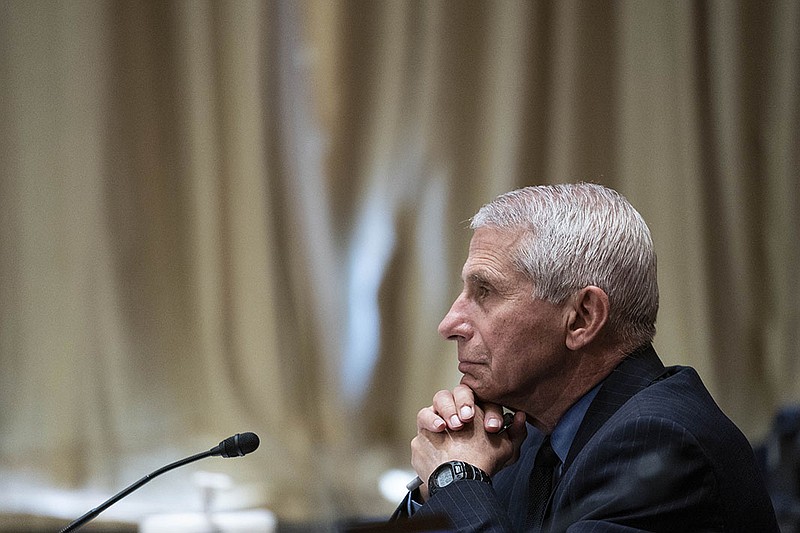 Dr. Anthony Fauci, director of the National Institute of Allergy and Infectious Diseases and shown at a Senate hearing Wednesday, has joined calls for further investigation into the origins of the coronavirus. (AP/Sarah Silbiger)

China reacted angrily to the Biden administration's calls for a harder investigation into the origins of the coronavirus pandemic -- accusing the United States of hypocrisy and suggesting it needed to open its own biological laboratories to international inspection.

Speaking at a media briefing Thursday in Beijing, Foreign Affairs Ministry spokesman Zhao Lijian said President Joe Biden's call for more scrutiny of the still-disputed origins of the coronavirus was politically motivated and showed the United States "does not care about facts and truth, nor is it interested in serious scientific origin tracing."

Zhao, one of the country's most hawkish diplomats, referred to a U.S. military site that has been linked to the coronavirus outbreak by Chinese media outlets.

Describing Fort Detrick in Frederick, Md., as "full of suspicion," Zhao said the United States needed to open it up to international scrutiny. "There are more than 200 U.S. biological laboratories scattered around the world. How many secrets are there?" he said.

Fort Detrick hosts elements of the country's biological defense program. While trying to deflect criticism of their handling of the coronavirus outbreak, Chinese officials have repeatedly responded by calling for the base to be opened to international inspectors.

Zhao also mentioned the faulty intelligence about weapons of mass destruction that led to the invasion of Iraq in 2003 and implied that U.S. intelligence services were linked to a chemical weapons attack against rebels in Syria.

Biden on Wednesday ordered U.S. intelligence agencies to "redouble their efforts" in examining the chain of events that led to the global pandemic.

While noting there was no "definitive conclusion," the president said some members of the intelligence community "lean" toward the belief that the coronavirus could have emerged from a laboratory incident.

The Trump administration had suggested that the virus may have originated from the Wuhan Institute of Virology, which has the highest level of biosecurity clearance. The virus that has gone on to kill at least 3.5 million people worldwide was first detected in the city in central China.

Many scientists believe the coronavirus probably jumped to humans through an intermediate animal host, and a joint report released by China and the World Health Organization in March said it was "extremely unlikely" that it leaked from a lab.

[Video not showing up above? Click here to watch » https://www.youtube.com/watch?v=6w2at7731mI]

But the report was widely criticized, and WHO chief Tedros Adhanom Ghebreyesus said data had been withheld from his investigators, who were given only restricted access to Chinese resources.

There has been increasing pressure recently to not discard the lab theory and to investigate more thoroughly. Wall Street Journal reports, including one highlighting how several Wuhan lab employees got sick in the fall of 2019 with covid-19-like symptoms, have added to that.

Anthony Fauci, director of the U.S. National Institute of Allergy and Infectious Diseases, has said he wasn't totally convinced that the coronavirus developed naturally, and he thinks more investigation is needed.

Biden is aiming to head off GOP complaints that he has not been tough enough, as well as using the opportunity to press China on alleged obstruction.

He asked U.S. intelligence agencies to report back within 90 days, and he told reporters Thursday that he aimed to release their results publicly. He directed U.S. national laboratories to assist with the investigation and the intelligence community to prepare a list of specific queries for the Chinese government, and he called on China to cooperate.

Republicans, including former President Donald Trump, have promoted the theory that the virus emerged from a laboratory accident rather than naturally through human contact with an infected animal in Wuhan.

Arkansas Republican U.S. Sen. Tom Cotton is among the skeptics. He said Wednesday that the Biden administration's response was "better late than never," but that "the answer lies in the hands of Chinese communists, not people working for American intelligence agencies."

Biden ordered an initial intelligence review in March, and upon being presented with its conclusions he determined that more digging was required. He also ordered that excerpts of the assessment be declassified to demonstrate the government's commitment to investigating the origins of the pandemic and to increase pressure on China to cooperate, White House press secretary Jen Psaki said Thursday.

"He felt that it was important given a lot of confusion out there to make public, not only what the (intelligence community) had done, but also to expand the investigation for 90 days, add more components of the federal government, including our national labs and our health and medical expertise," she said. "So that's exactly what we did."

Many scientists reacted positively to the administration's move, reflecting their push in recent weeks for more information about the work of the virus lab in Wuhan. But they cautioned against expecting an answer in the three-month time frame of the president's request.

After long steering clear of the debate, some influential scientists have lately become more open to expressing uncertainties.

"In the beginning, there was a lot of pressure against speaking up, because it was tied to conspiracies and Trump supporters," said Akiko Iwasaki, an immunologist at Yale University. "There was very little rational discussion going on in the beginning."

Virologists still largely lean toward the theory that infected animals -- perhaps a bat, or an animal raised for food -- spread the virus to humans outside of a lab. There is no direct evidence for the lab-leak theory that Chinese researchers isolated the virus, which then infected a lab worker.

But China's integral role in the inquiry with the WHO made its dismissal of the lab-leak theory difficult to accept, Iwasaki and 17 other scientists argued in the journal Science this month.

"I typically only speak about a topic publicly if I have some new scientific result that makes me confident about a new discovery or conclusion," said one of the organizers of that letter, Jesse Bloom, who studies the evolution of viruses at the Fred Hutchinson Cancer Research Center. "In the case of SARS-CoV-2 origins, I still am not confident about what happened."

And "as time went on, it became clear that not saying anything about the origins was being interpreted as agreeing with the idea that the virus definitely originated from a zoonosis," he said, referring to an animal spillover.

While researchers generally welcome a sustained search for answers, some warn that those answers may not arrive anytime soon -- if ever.

"At the end of this process, I would not be surprised if we did not know much more than we know now," said W. Ian Lipkin, a virologist at the Mailman School of Public Health at Columbia University, who was one of the first U.S. scientists to visit China in early 2020 to consult with public health authorities.

China's lack of cooperation with the WHO has long fueled suspicions about how the coronavirus emerged seemingly from nowhere to seize the world.

In February 2020, the Chinese government agreed to host a scientific mission, but it came under fire from critics because it was constructed as a cooperative study with international experts and Chinese scientists, and the Chinese controlled access to data. In addition, the mission had no mandate to investigate laboratories where virus research was conducted.

In the early days, speculations even circulated that a Chinese biological warfare program had produced the virus. In March 2020, Lipkin and colleagues published a letter in which they dismissed that possibility.

"There was no evidence to suggest this had been weaponized," Lipkin said. "I haven't changed my view on that."

Evolution was more than capable of brewing a new pandemic virus, he and other experts said. Bats and many other animals are hosts to coronaviruses. When an animal is infected by two strains of coronaviruses, they can swap genetic material in a process called recombination.

Meanwhile, Facebook reversed course Thursday and said that it no longer would remove posts that claim the virus is man-made.

The decision is notable because it shows once again how social media giants struggle to strike the right balance between protecting the public from harmful misinformation and enabling robust discussion of controversial ideas.

The claim that the coronavirus is man-made, long dismissed by the scientific community as a harmful conspiracy, has recently been reopened because of new findings. That includes the news about the sickened researchers in Wuhan.

But the reopening of debate presents challenging issues for Facebook because the claim has also been associated with a wave of anti-Asian sentiment.

Joan Donovan, research director of the Technology and Social Change Research Project at the Shorenstein Center on Media, Politics and Public Policy at Harvard Kennedy School, said it was inevitable that the changing sentiment around the lab theory could unleash more anti-Asian sentiment on social media. Tech companies need to redouble their efforts to protect Asian Americans and Pacific Islanders now that the claim is gaining more credence, she added.

"What we have to look out for in the U.S. is an uptick in content that criticizes China, while dividing the AAPI community," she said. "Content that dehumanizes Chinese people, accuses Chinese people of being responsible or somehow of knowing about the pandemic, or otherwise suggests that it was a bioweapon will grow. Companies are going to have to look for content where AAPI hate is monetized and make sure that it does not become profitable."

Facebook said the company would continue to shift its policies based on new information.

Information for this article was contributed by Katerina Ang, Adam Taylor and Elizabeth Dwoskin of The Washington Post; by Zeke Miller, Aamer Madhani, Christina Larson, Matthew Lee, Lisa Mascaro and Ken Moritsugu of The Associated Press; and by Carl Zimmer, James Gorman and Benjamin Mueller of The New York Times.