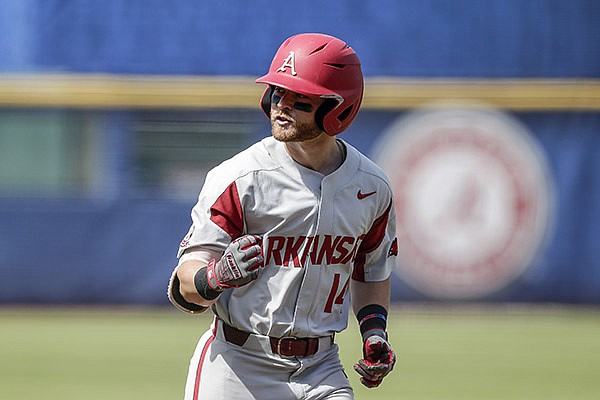 Arkansas' Cullen Smith reacts after hitting a two-run home run against Ole Miss in the first inning of an NCAA college baseball game during the Southeastern Conference tournament Saturday, May 29, 2021, in Hoover, Ala. (AP Photo/Butch Dill)

Arkansas will play for a second SEC championship in 2021.

The No. 1 Razorbacks defeated No. 11 Ole Miss 3-2 on Saturday in the SEC Tournament semifinals at Hoover (Ala.) Metropolitan Stadium. Arkansas will play Tennessee in the tournament championship game Sunday at 2 p.m.

Jalen Battles’ two-out RBI single scored Charlie Welch in the top of the sixth inning to give the Razorbacks a 3-2 lead after Ole Miss tied the game on a two-run single by Jacob Gonzalez in the bottom of the fifth.

The Rebels had a chance to take the lead in the fifth, but Arkansas relief pitcher Heston Tole retired Ole Miss’ No. 5 and 6 hitters, Tim Elko and Hayden Dunhurst, to strand the bases loaded.

A one-out walk in the seventh was Noland’s only blemish. Battles turned a 6-3 double play to end the seventh and Noland didn’t allow a base runner in the eighth or ninth innings.

Arkansas (45-10) is the lone undefeated team in this week’s tournament and has won seven consecutive games dating to a 3-2 series-clinching win at Tennessee on May 16. The Razorbacks swept Florida last week to clinch the SEC regular-season championship and beat Georgia and Vanderbilt earlier this week in Hoover.

Cullen Smith hit a two-run home run in the third at bat Saturday to give Arkansas a 2-0 lead in the first inning Saturday. Smith, who has homered twice at the tournament, scored Cayden Wallace, who doubled with one out.

Arkansas starting pitcher Caleb Bolden worked around base runners in each of four scoreless innings. Bolden scattered 3 hits and 3 walks, and struck out 3.

The Razorbacks ran into trouble in the fifth inning. Zebulon Vermillion allowed a leadoff single to Hayden Leatherwood, then took himself out of the game with what appeared to be an arm injury.

Caden Monke walked TJ McCants and Justin Bench with one out before Gonzalez tied the game with a one-out double. Tole struck out Elko and got Dunhurst to ground out to end the inning.

Ole Miss (41-19) had a pair of crucial outs on the bases. Arkansas catcher Casey Opitz threw out Kevin Graham trying to steal third base in the third inning, and McCants was thrown out to end the sixth by the Arkansas third baseman Wallace while trying to stretch a single into two bases.

The Razorbacks improved to 3-1 this season against Ole Miss. The Rebels lost two of three to Arkansas at home in April.

Arkansas won a series at Tennessee earlier this month when all three games were decided by one run. The Razorbacks overcame a five-run deficit in the first game and the Vols walked off Arkansas with a three-run home run in the ninth inning of Game 2.

Noland is still in the game and Leatherwood grounds up the middle against him. Battles behind the second base bag fields, throws and gets Leatherwood for out number one.

Kemp Alderman comes in to pinch hit for Ole Miss.

Noland strikes him out on three pitches.

McCants strikes out swinging to end the game.

Bates strikes out looking to start the inning.

Battles works a walk and Mike Bianco comes out to talk to his pitcher.

Battles tries to steal second, but he's thrown out.

Goodheart takes a ball low and he walks.

Bianco comes out again and Burton's day is done.

Austin Miller in to pitch.

Braydon Webb comes in to pinch run for Goodheart. A wild pitch moves him to second.

Wallace strikes out swinging to end the inning.

Noland works a 1-2-3 inning, the first inning Ole Miss did not get a baserunner.

Noland got a strikeout, groundout and a flyout to center to push this game to the ninth.

Moore walks to start the inning, but Welch strikes out after that.

Ole Miss returns Arkansas' double play with one of their own. Opitz grounds into the 4-6-3 double play to end the inning.

Connor Noland in to pitch for Heston Tole

Noland strikes out the first batter on three pitches. He walks the next batter, but then forces a double play as Battles fields the ball, steps on second and then throws to first for the third out.

Wes Burton in the game for the Rebels.

Wallace strikes out on a full count pitch that looked low. If you believe in make up calls then that's what that was for the Rebels. Burton is a character in the largest sense of the word. He talks to himself pretty emphatically on the mound. It looked like he had some words for Wallace as he walked to the dugout.

Smith lines out to left and Franklins strikes out swinging to end the inning.

Tole gets a fly ball to Goodheart in left to start the inning.

He walks the next batter, but bounces back with a strikeout.

The next batter ropes a single to right-center, the runner on first goes to third and so does the throw. The batter McCants tries to take second and Wallace throws over to second and the Hogs get the last out of the inning on the Ole Miss base running blunder.

Welch walks to start the inning. Opitz strikes out swinging and then Bates hits a swinging bunt back to the pitcher. Welch moves up to second.

Battles comes up with a huge two-out hit and gives Arkansas the lead. He doubles down the left field line, Welch comes in and the Hogs lead 3-2.

Goodheart strikes out to end the inning.

Zebulon Vermillion comes in for Bolden to start the bottom of the fifth.

Vermillion allows a hit to start the inning and then throws a wild pitch to the backstop and the runner advances to second. Vermillion calls the staff out and his day is done. I have no idea what he hurt, but something must not have felt right on that wild pitch.

Van Cleave comes in to pinch hit against Monke.

Monke gets a strikeout looking on a pitch that should have been ball four.

Monke walks the next batter on four straight pitches.

After a first pitch ball, Hobbs comes out to talk to Monke.

Monke walks the next batter to load the bases.

Gonzalez doubles to the right-center field gap. Bates comes over to cut it off, but two runs score and there are runners on second and third with just one out.

Tole comes in and strikes out Elko. He then gets a groundout to first to end the inning.

Goodheart works a full count walk, and that's the first time this game Arkansas has gotten the leadoff batter on base.

Wallace pops up foul to the catcher for the first out.

Ole Miss head coach Mike Bianco goes out to the mound and he's going to make a pitching change.

Smith grounds out to first, Goodheart advances to second.

Franklin walks on four pitches and that brings up Moore hitting from the right side.

Moore flies out left-center to end the inning.

Graham and Elko single to start the fourth inning for Ole Miss.

Matt Hobbs comes out to visit with Bolden.

Vermillion is throwing in the Arkansas bullpen.

With two runners on Ole Miss puts them in motion. Dunhurst strikes out and Opitz throws the runner out at third.

Bolden gets a pop fly to right to end the inning.

Ole Miss was threatening, but a risk goes wrong for the Rebels and Bolden works himself out of the jam.

Opitz flies out to left to start the inning.

Battles grounds out to second to end the inning. That's the first time the Hogs go down in order.

Bolden gives up another two out walk, but that's it for Ole Miss in the third.

He got two outfield fly outs and a groundout right back to the mound to end the inning.

Smith flies out to right for the first out.

Franklin sees 10 pitches and then hits a fly ball to right-center field, the left fielder and center fielder both dive, but neither one of them come up with it. Franklin goes into third standing up.

Moore pops up the first pitch he sees to the shortstop.

Welch grounds out to third to end the inning.

Bolden retires the first two batters of the inning with a strikeout and a flyout to left. Chatagnier makes Bolden throw 10 pitches, and he works a walk.

Bolden paints the corner and gets a strikeout looking to end the inning.

Opitz hits a ball solid, but the right field runs down the line drive for the first out.

Bates pops up to center for the second out.

Battles singles through the left side for the third hit of the day.

Goodheart drives a ball to the right-center field gap. Battles goes to third and there are runners on the corners with two outs.

Wallace strikes out swinging on a 2-2 pitch that was down and in to end the inning.

Bolden gets the first batter to ground out right back to him on the mound for the first out.

The next two batters reach on a single up the middle and walk.

Bolden induces a 4-6-3 double play to end the inning. Moore and Battles are too smooth at the double play up the middle.

Matt Goodheart, who is playing left field today, leads off the first with a pop up to shortstop.

Wallace follows with a double that dies in the left-center field gap. The center fielder dove for it, but couldn't catch it.

Smith takes advantage of a hanging breaking ball and launches it over the right field fence to give Arkansas the early lead.

The count runs full on Franklin and he takes a fastball in to walk.

Moore swings through a fastball on the outside part of the plate for the second out.

Welch puts a charge in one, but it's caught at the left field fence to end the inning.

The loser of Saturday’s game will be eliminated. The winner will advance to the championship game against Tennessee on Sunday.

Arkansas is the No. 1 seed at the SEC Tournament following its regular-season championship. The Razorbacks have never won the tournament title.

Arkansas defeated Georgia 11-2 on Wednesday and Vanderbilt 6-4 on Thursday.

The Razorbacks will be without first baseman Brady Slavens after Slavens sprained his ankle during the game against Georgia. Slavens, who leads the SEC with 61 RBI, is expected to miss 1 to 3 weeks.