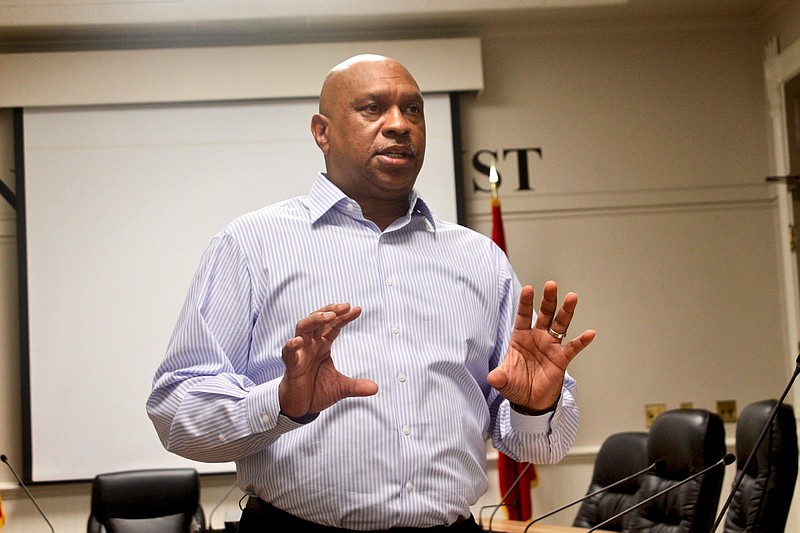 Jefferson County department heads have been asked to evaluate their offices and consider cross-training and automating their office in an effort to establish a more efficient, streamlined, effective and sustainable county.

Because of a falling population, Jefferson County will drop down to a Class 5 County for the next 10 years, decreasing state turnback money, road funds and tax collection.

Monthly revenue that the county was expecting from the Saracen Casino Resort and other areas, that was estimated to be between $300,000 and $400,000, fell short due to the pandemic putting the county in a position of needing to make tough decisions.

"We are employee top-heavy and I do realize the special needs in some of the other offices," Robinson said to the department heads. "My main thing is sustainability. Dropping to a class 5 is going to affect us. When we look at employee reduction, I'm asking each department to look at automation and cross-training in their office."

Making several cuts in the judge's office last month, Robinson said more deletions would be coming in his department.

"I have gone through my department and am going to delete three more positions. That will be about $120,000 in savings to the county," he said. "That's just me looking at my department, saying, 'Hey, I think we can do this and make some cuts.'"

With savings from sanitation, insurance premiums and energy, the county was able to afford the raises given to the county employees this year. In order to sustain them and pay employees, according to the salary survey, Robinson said something must be done.

Employee raises totaled approximately $540,000, but when compared to other counties with smaller populations, some employees were making $5,000 to $6,000 less in Jefferson County.

"Our biggest draw is our employees," said Robinson. "If we want to keep our good employees, we are going to have to be able to pay them."

The county was also expecting revenue from the city of Pine Bluff's jail usage. Instead, the county now finds itself being sued by the city, which Robinson is confident will work out in the end for both entities.

The county experienced furloughs and implemented a hiring freeze in the midst of the pandemic.

Those slots remained vacant. When someone leaves during a hiring freeze, that slot is eliminated, Robinson said during the meeting with the Quorum Court.

If those offices managed with those empty slots for this long, he said the department may not need that slot filled after all. Several department heads disagreed and didn't like Robinson met with the Quorum Court before bringing the matter to them.

"It seems like you have made up your mind that this is what we're going to do," County Assessor Yvonne Humphrey said.

When it comes to employee reduction, Robinson said he is asking each department to look at automation and cross-training in their office. Due to segregation of duties, Washington said the auditors won't allow cross-training.

"That's what keeps everything checks and balances when it comes to money, who can write checks, who can void checks," said Washington. "If we are going to do this and try to make this work, then we should be working together."

According to Humphrey, the officers of the county assessor, tax collector and treasurer are reimbursed by the state.

"We're not costing the county any money," Washington said after the meeting. "The county gets reimbursed every dollar that we spend in our office. It doesn't make sense to cut."

Washington said this is his busiest time of the year and with paperwork stacked on his desk, he is short a person that collects money and makes sure all dollars are placed correctly, which is important for an audit.

Humphrey said she is unsure if her office will pass the audit, noting she cut her budget and her employees, but that she shouldn't have, based on the workload in her department.

"I have cut my employees down and it is killing us," said Humphrey, who said not passing the audit was scary to think about. "If I lose an employee and I cannot replace them and it's in the budget, I don't understand that. I don't think we have enough say in what goes on."

Given the opportunity to speak up, the other department heads chose not to say anything, but Robinson extended a one-on-one invite for anyone who had additional questions or concerns.

"I'm not trying to run your office, whether you think that or not," Robinson said, adding that he couldn't make any changes and was just offering solutions. "I can be criticized, but all I did today was provide the information."