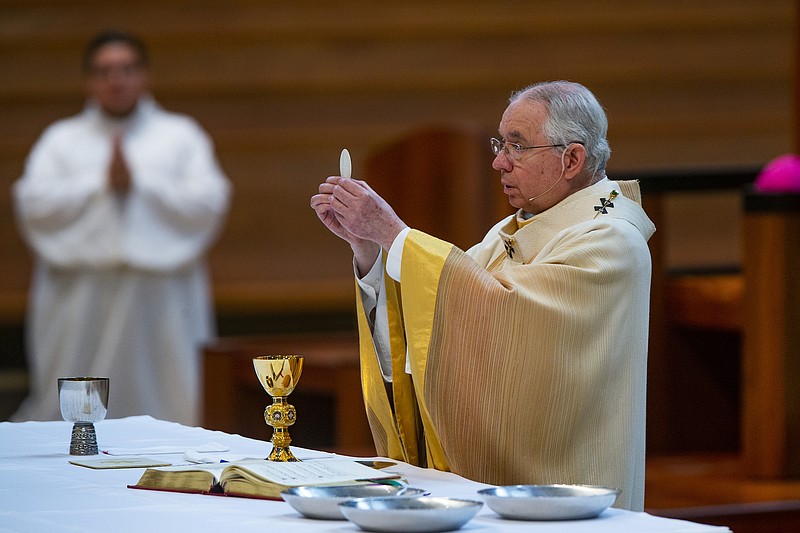 FILE - In this Sunday, June 7, 2020 file photo, Archbishop Jose H. Gomez holds a Communion wafer as he celebrates the the Solemnity of the Most Holy Trinity, a Mass with churchgoers present at the Cathedral of Our Lady of the Angels in downtown Los Angeles. Despite calls from some of its members for a delay, the U.S. Conference of Catholic Bishops plans to devote part of its national meeting in June 2021 to the sensitive issue of which Catholics are worthy of receiving Communion. (AP Photo/Damian Dovarganes, File)

The U.S. Conference of Catholic Bishops plans to devote part of its national meeting next month to the sensitive issue of which Catholics are worthy of receiving Communion, despite calls for a delay.

Dozens of bishops had requested that the conference president, Los Angeles Archbishop Jose Gomez, postpone the debate until a later meeting, when they could meet in person rather than virtually. But prompt action is being sought by some conservative bishops who want to signal that President Joe Biden and other Catholic politicians who support abortion rights should not receive Communion.

The conservatives are now heartened, as Gomez confirmed in a memo May 22, that the topic is on the agenda of the June meeting. A vote is scheduled on whether the conference's Committee on Doctrine should draft a document addressing the Communion issue and present it at a later date.

An explanation of the agenda item makes clear that one of the subtopics will be the receiving of Communion by cultural and political leaders.

Denver Archbishop Samuel Aquila, one of the conservatives engaged in the discussions, issued a statement Tuesday praising Gomez and saying he "followed the correct procedures to facilitate this critical discussion as a body of bishops."

Aquila referred to a May 7 letter to Gomez from the head of the Vatican's doctrine office, Cardinal Luis Ladaria, urging the U.S. bishops to deliberate carefully and minimize divisions before proceeding with any action on the Communion issue.

"It was clear from it that the [conference]'s plan to discuss and debate this important issue is warranted and encouraged," Aquila said. "In contrast, the publication of the letter calling for a halt to discussion at our June meeting on this vital issue risks creating an atmosphere of factionalism, rather than unity amongst the bishops."

The bishops who requested a delay did not release their letter publicly or issue statements about it. According to The Pillar, an online news outlet covering the Catholic Church, the signatories included Cardinals Blase Cupich of Chicago and Wilton Gregory of Washington, the latter of whom has made clear that Biden is welcome to receive Communion at his archdiocese's churches.

But in a recent essay, Bishop Robert McElroy of San Diego made a case against the campaign to deny Biden and others Communion.

"It will bring tremendously destructive consequences," McElroy wrote. "The Eucharist is being weaponized and deployed as a tool in political warfare. This must not happen."

San Francisco Archbishop Salvatore Cordileone, one of the conservatives, criticized the request to delay the debate.

"I'm deeply grieved by the rising public acrimony among bishops and the adoption of behind-closed-doors maneuvers to interfere with the accepted, normal, agreed-upon procedures of the [conference]," Cordileone said in a statement. "Those who do not want to issue a document on Eucharistic coherence should be open to debating the question objectively and fairly with their brother bishops, rather than attempting to derail the process."

Cordileone thanked Gomez "for his integrity in assuring that the procedures of our bishop's conference are followed" and said he looked forward to "serene dialogue" about Communion policies at the June meeting.

Aquila, in his statement, suggested that Catholics endanger their souls if they receive Communion "in an unworthy manner."

"As bishops, we are failing in our duty as shepherds if we ignore this truth and how it is manifesting itself in today's society, especially with regards to those in prominent positions who reject fundamental teachings of the Church and insist that they be allowed to receive Communion," Aquila said.

Cardinal Ladaria's letter to Gomez in May made several points that could affect how the U.S. Conference of Catholic Bishops handles the concern:

• He said any new statement should not be limited to Catholic political leaders but broadened to encompass all churchgoing Catholics regarding their worthiness to receive Communion.

• He questioned the U.S. Conference of Catholic Bishops policy identifying abortion as "the pre-eminent" moral issue, saying it would be misleading if any new document "were to give the impression that abortion and euthanasia alone constitute the only grave matters of Catholic moral and social teaching that demand the fullest accountability on the part of Catholics."

• He said that if the U.S. bishops pursue a new policy, they should confer with bishops' conferences in other countries "both to learn from one another and to preserve unity in the universal church." 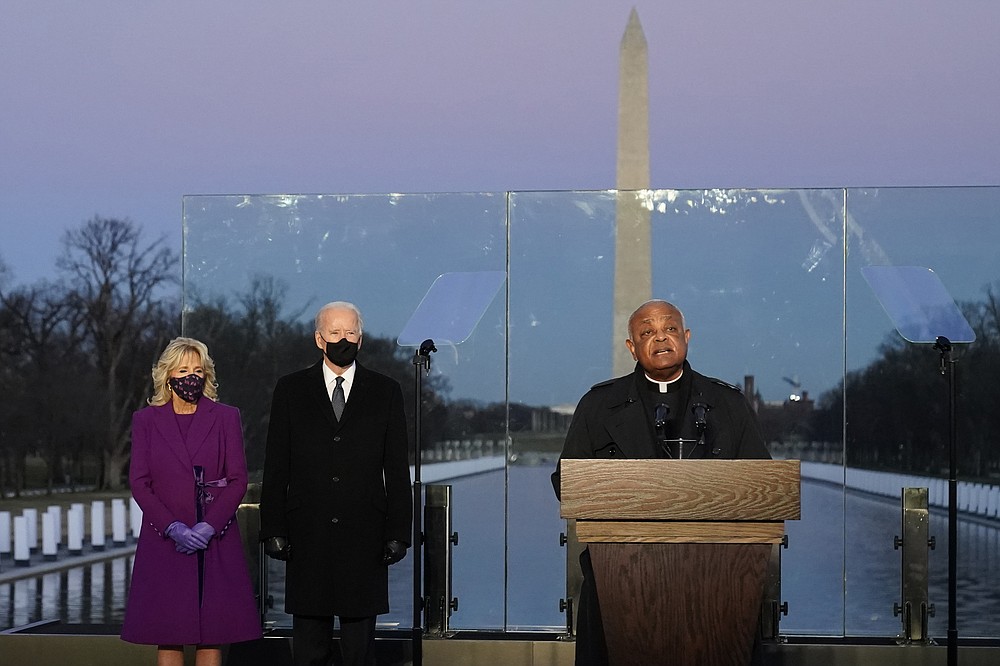 FILE - In this Tuesday, Jan. 19, 2021 file photo, President-elect Joe Biden and his wife, Jill, listen as Cardinal Wilton Gregory, Archbishop of Washington, delivers the invocation during a COVID-19 memorial at the Lincoln Memorial Reflecting Pool in Washington. Gregory has made clear that President Biden, who sometimes worships in Washington, is welcome to receive Communion at the archdiocese's churches. (AP Photo/Alex Brandon, File)
ADVERTISEMENT