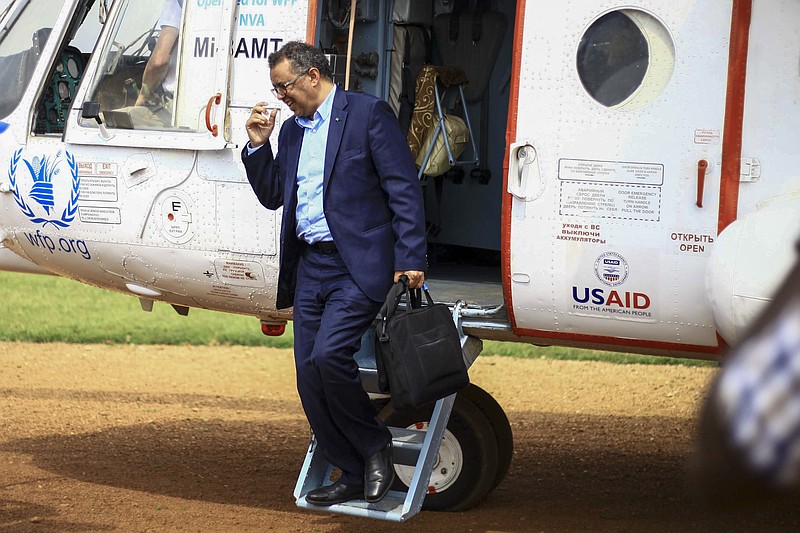 FILE - In this Saturday, June 15, 2019 file photo, World Health Organization Director-General Tedros Adhanom Ghebreyesus arrives by helicopter at Ruhenda airport in Butembo, eastern Congo, to visit operations aimed at preventing the spread of Ebola and treating its victims. The head of the World Health Organization acknowledged the U.N. agency’s response to allegations of sexual abuse perpetrated by its own staffers during an Ebola outbreak in Congo was “slow” after being pressed on the issue by numerous countries following an Associated Press investigation that revealed senior management were informed about sexual misconduct complaints. (AP Photo/Kudra Maliro, File)

LONDON -- The head of the World Health Organization acknowledged the U.N. health agency's response to sexual abuse allegations involving employees who worked in Congo during an Ebola outbreak was "slow," following an Associated Press investigation that found senior WHO management knew of multiple cases of misconduct.

As the WHO's highest decision-making body met this week, countries were tackling subjects like how to reform the U.N. health agency's emergencies program after its missteps in responding to the coronavirus pandemic. At its weeklong meeting of countries, the WHO held a roundtable talk on preventing sexual abuse Friday.

"In many ways, we're all to blame for what happens in these situations," said Dr. Michael Ryan, the WHO's emergencies chief.

Diplomats have already pressed WHO Director-General Tedros Adhanom Ghebreyesus on the issue behind closed doors. At least six countries raised concerns last week about how the agency was handling sexual abuse and exploitation, citing recent press reports. Tedros tried to allay their worries.

"I can understand the frustration," he told a committee meeting of the WHO's executive board on May 19. According to a recording of the meeting obtained by the AP, the director-general said it took time to deal with security problems in Congo, to install a commission to investigate sex abuse claims and to get the group up and running.

"The way this thing was run until now, although it was slow ... I hope it will satisfy," Tedros said.

The WHO's press office declined to comment on Tedros' description of a slow response but said the commission was "committed to conducting a comprehensive investigation into all recent allegations, including those relating to management actions." The group's co-chairs were asked to sign a confidentiality agreement with the WHO.

The panel commissioned by the WHO does not include any law enforcement agencies to investigate if any of the reported sexual exploitation was criminal, and its reports will be submitted only to the WHO.

Tedros created the panel in October, after news reports surfaced about sex abuse during the WHO's efforts to contain the Ebola epidemic in Congo from 2018 to 2020. At the time, Tedros said he was "outraged" and would move quickly to punish those responsible.

But more than seven months later, the panel has yet to release any details about its work or findings. The commission began its work in Congo on May 3 and expects to publish a report at the end of August, the group said.

Many countries said they expected more action, alluding to the AP's recent story. Nearly 50 countries issued a statement Friday expressing their "deep concerns" about the WHO's handling of sexual abuse.

"We expressed alarm at the suggestions in the media that WHO management knew of reported cases of sexual exploitation and abuse, and sexual harassment and had failed to report them, as required by U.N. and WHO protocol, as well as at allegations that WHO staff acted to suppress the cases," the statement said.

The United States, addressing the assembly Friday, urged other countries to hold the WHO accountable for its management of sex abuse claims; Canada, Australia, Britain, New Zealand and Mexico were among the countries that signed the statement.

Simon Manley, Britain's ambassador to the U.N. in Geneva, called for the WHO to reconsider issues including whether the U.N.'s internal oversight office should be involved in probing sex abuse claims and to clearly explain what the process would be for sharing its investigation results with member countries. Manley said earlier reports "lacked detail" and should have been shared earlier.

"We must from now on see much more transparency from the WHO," he said.

An AP investigation published this month found members of the WHO's senior management were told of sexual abuse concerns in 2019 involving at least two doctors employed by the agency during the Ebola epidemic in Congo.

The AP obtained a notarized contract showing two WHO staff members signed off on an agreement by Dr. Jean-Paul Ngandu to pay off a young woman he reportedly impregnated. Another doctor, Boubacar Diallo, bragged of his relationship with WHO chief Tedros and offered women jobs in exchange for sex, three women told the AP.

Even some WHO staffers appear unsatisfied at how the agency has handled the claims.

"We cannot afford to ignore signs of repeated, systemic failure of our Organization to prevent such alleged behaviors and to address them in a just and timely manner," the WHO staff committee wrote in an email to staff and senior management last week.

The committee urged WHO directors to take immediate action over the allegations, including reports that "senior management may have suppressed concerns." 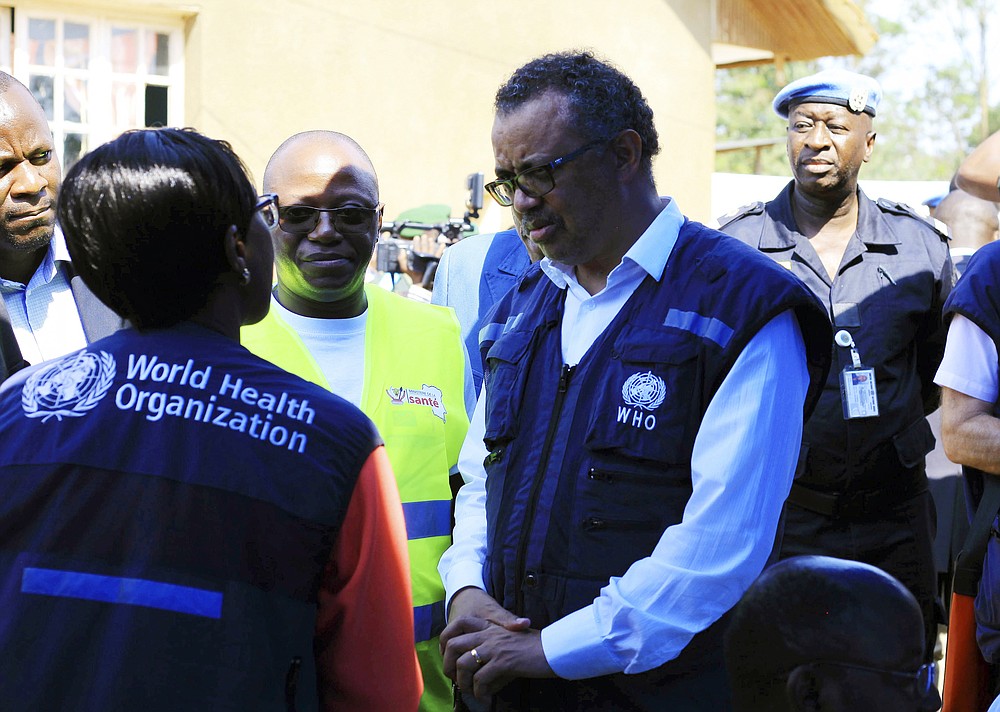 FILE - In this Friday, Aug. 10, 2018 file photo, Dr. Tedros Adhanom Ghebreyesus, WHO Director General, centre, speaks to a health official at a newly established Ebola response center in Beni, Democratic Republic of Congo. The head of the World Health Organization acknowledged the U.N. agency’s response to allegations of sexual abuse perpetrated by its own staffers during an Ebola outbreak in Congo was “slow” after being pressed on the issue by numerous countries following an Associated Press investigation that revealed senior management were informed about sexual misconduct complaints. (AP Photo/Al-hadji Kudra Maliro, FIle) 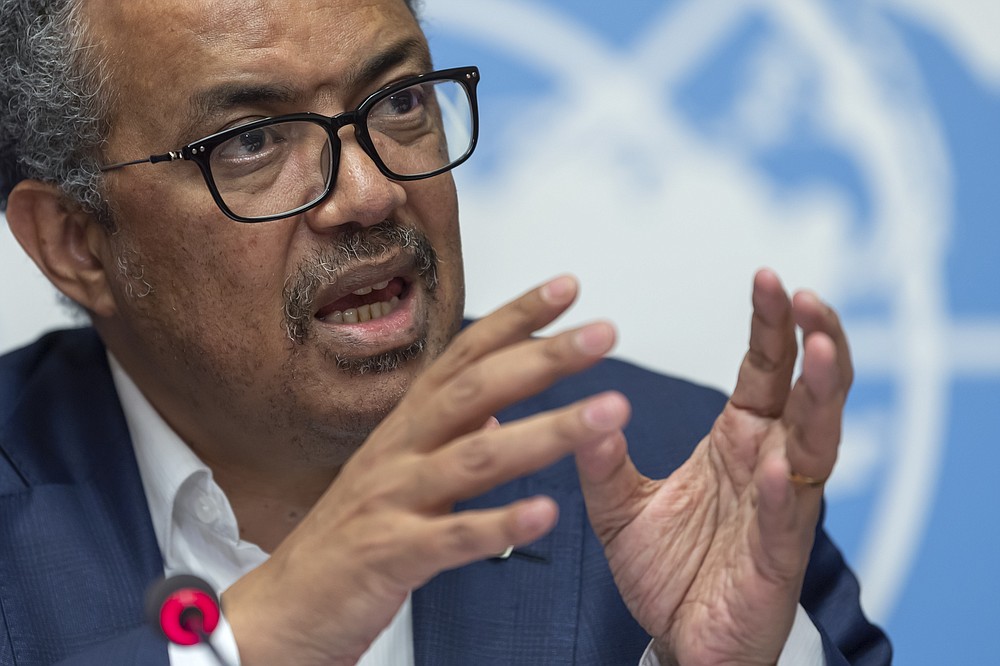 FILE - In this Thursday, March 14, 2019 file photo, Tedros Adhanom Ghebreyesus, Director-General of the World Health Organization (WHO) speaks at the European headquarters of the United Nations in Geneva, Switzerland about the update on WHO Ebola operations in the Democratic Republic of the Congo (DRC). The head of the World Health Organization acknowledged the U.N. agency’s response to allegations of sexual abuse perpetrated by its own staffers during an Ebola outbreak in Congo was “slow” after being pressed on the issue by numerous countries following an Associated Press investigation that revealed senior management were informed about sexual misconduct complaints. (Martial Trezzini/Keystone via AP, File)
ADVERTISEMENT