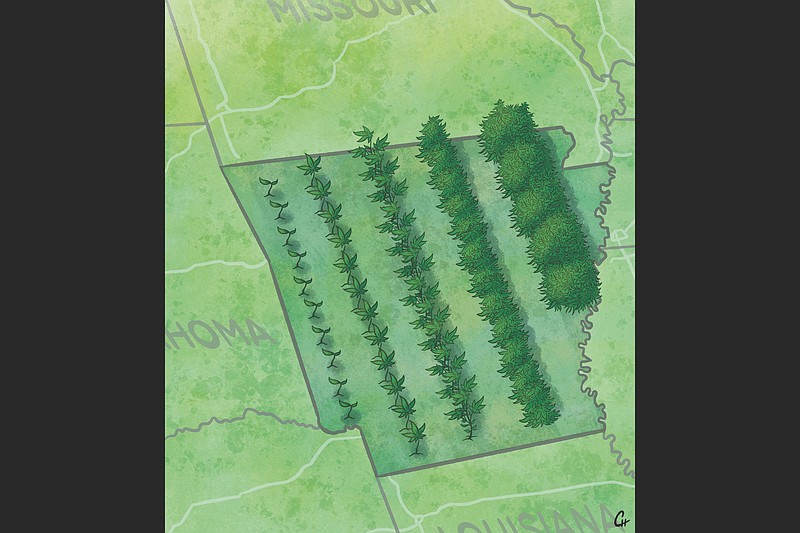 On Friday, May 10, 2019, Suite 443 in Hot Springs (then known as Doctor's Orders) opened its doors as the state's first medical marijuana dispensary.

It was the toke heard (well, taken) 'round the world, setting off an economic revolution in Arkansas that, at its two-year anniversary, has well outpaced projections. And, industry experts say, there's no sign of slowing down as growers and retailers enter uncharted territory of demand.

Those 76,500 active patients are spending about $885,000 per day on medical marijuana, spread out over the state's 32 operating licensed dispensaries, Hardin adds.

What's more, the pace is quickening.

Altogether, patients in the state have spent more than $303.5 million on medical marijuana since Suite 443 hung out its shingle, followed by 31 other dispensaries through January of this year. Six more licensed dispensaries have yet to come online and two licenses are still up for grabs to round out the 40 sites allotted by Amendment 98, passed by Arkansas voters in 2016.

Hardin says the tax benefit to the state, to say nothing of relief to thousands of patients, has been substantial ... even without all of the allowable outlets selling.

"There are two different taxes that apply with every purchase," he says. One is a 6.5% state sales tax that would apply to any retail item. A 4% privilege tax, established by the Legislature, generates revenue for the Rockefeller Cancer Institute, University of Arkansas for Medical Sciences, to pay for the earning of a National Cancer Institute designation.

"So, any time a patient walks in the door to a dispensary, they're going to spend 10.5% in state taxes," Hardin says. "To date, that has resulted in roughly $31 million in overall collections."

Hardin says it's difficult to compare Arkansas' performance in this area with those of other states because of the disparity in regulations. Medical marijuana walks a filament tightrope between the states and the federal government, which still lists cannabis as a Schedule 1 narcotic, on par with ecstasy and heroin. Heavily regulated and taxed, the medical marijuana industry operates according to various state fiefdoms — each with its own guidelines.

"Every program across the U.S. is quite a bit different," Hardin says. "Our program is unique in that it's extremely limited and an extremely regulated program. We're limited to 40 dispensaries, maximum. Whereas, you cross the border over into Oklahoma, and you have literally thousands of dispensaries. You could not have two more varied programs."

One guideline — prohibiting in-state dispensaries from using out-of-state product — is one of the challenges of the system. Of the eight cultivator licenses approved and awarded under Amendment 98, five are up and running. Some dispensary owners say this has, at times, made inventory scarce and given growers exceptional leverage, something that could persist as demand continues to grow.

"It's all dependent on the supply from the cultivators," says Ed Pat Wright, part of the ownership group behind Greenlight Dispensary in Helena. "We're the poorest area of the state. We have found out that people in our area can't really afford the product we get at $3,000 to $4,000 per pound. We've got to be able to buy it at $2,000 to $2,500 per pound.

Population and income disparity are two of the stiffest challenges to the myth that building a dispensary is a universal cash cow, Wright says. All told, about 45,300 pounds of medical marijuana have been sold between May 2019 and May 2, 2021, per the Alcohlic Beverage Control Board, with Releaf Center of Bentonville leading the field at 4,863 pounds. Of the 32 dispensaries in operation, 13 have sold 2,000 pounds or more; all but one (Native Green of Hensley) are located in or within a 10-mile radius of major population centers.

Greenlight, which draws largely from surrounding rural and poor Delta counties, ranks 20th on that list, having sold about 585 pounds. Opened in June 2019, it's the oldest-operating dispensary in the state to be ranked that low. A combination of simple economics and competition have been tough hurdles to clear, Wright says.

"Our sales have really fallen off as more dispensaries have opened up. Previously, we were getting a lot of people from West Memphis, Jonesboro, different areas like that," he says. "Our sales have gone [down] from when there were four dispensaries [and] we were probably doing $100,000 a week. Now, it's just a little over that a month."

"We also don't have the card count in the county and in our surrounding areas. Right now, I think it's around 238 cardholders in Phillips County, the last time I looked. On their card, people can buy 2½ ounces every 14 days. That's about $1,000 to $1,100 worth of product, if they all maxed it out. But that's not happening. It's still expensive for a lot of people. They can't afford a doctor's visit or to get the card. You have to realize we have a lot of people around here that are on Medicaid. Some of them are on fixed incomes and they just can't afford it. I mean, they'll buy off the streets rather than buy it commercially."

To try to cut into the price of inventory, Greenlight has attempted to grow some of its own product, a move that's allowed under Amendment 98 within certain parameters. But that effort has proved more challenging than initially expected.

"The state allows dispensaries to have 150 plants and you can have 50 mature plants," Wright says. "I want to say we were only the second dispensary to start growing. It's been a challenge. It's a learning curve. We've had some crops fail. We've sent some off for testing and we've had a couple crops that have gotten thrown out because the heavy metal content is too high, which could be for different reasons. It could be the soil, it could be the water, it could be the type of plant in the soil ... It could be anything."

But, Wright adds, things are looking up a bit in that arena. 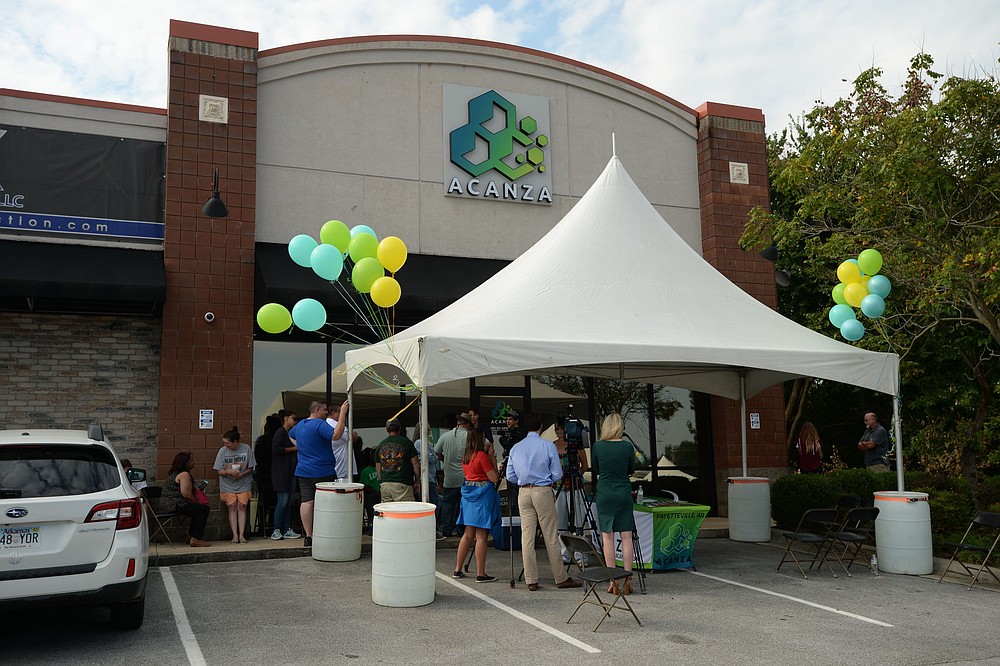 A potential disruptor to the industry in Arkansas, and elsewhere, is the mounting evidence that marijuana's fortunes are shifting nationally. Legalization advocates have pushed Congress for years to reconsider pot's inclusion among the deadliest narcotics in existence; recently it appears that proponents have finally achieved a firm toehold with lawmakers.

As Forbes magazine reported in December, progressives in control of the White House and Congress — as well as more states legalizing the plant for medicinal and recreational use — have led many experts to feel that the nation is the closest it has ever been to legalizing the industry, routinely pegged as somewhere north of $17 billion.

Until that happens, it falls to state legislatures to set policy within their borders. On this point, Arkansas lawmakers have moved judiciously in the industry's early stages.

"I think there's been some really good legislation [to] come out this session that [falls] on the side of transparency and answers some questions over issues that law enforcement has run into," says Taylor Riddle, spokesman for Delta Cannabis Co. dispensary in West Memphis. (Some of the owners of Delta Cannabis hold interests in Delta Medical Cannabis Co., a cultivator in Newport.)

"Overall, the Legislature hasn't done a ton as far as transforming the industry," Riddle says. "But they have done a lot to finesse certain areas where there's some questions that, before now, we really haven't been able to answer."

"A lot of people don't realize this, but even the commissioners who serve on the state Medical Marijuana Commission are unable to even see a cultivation facility. They can't even go into one," he says. "For that matter, it's debated whether or not the attorney general, who's the chief law enforcement officer in the state, can be in a cultivation facility.

"So, you're asking legislators to take our word on behalf of an industry that, for some, is still taboo."

Under a new law — Act 919, passed in the just-completed session — legislators and other officials will now be allowed such access, which Riddle says will greatly assist in their understanding of such operations.

"It's one thing for us to try to answer their questions, but it's another thing for them to be able to see the process, see how secure these facilities are, see that there's highly trained individuals dealing with everything from planting the seed to cataloguing the product. I think that will give them a little bit more peace of mind, if they have one of these facilities in their district."

Another medical marijuana-related bill passed by the Legislature — Act 1028 — extends the period of a visitors' patient card from 30 to 90 days while yet another — Act 1062 — sharpens guidelines for transport of medical marijuana and restricts where it can be smoked. All in all, according to Riddle, commonsense legislation that doesn't overreach.

"Things like that, we welcome," he says. "The industry understands [that] some of these perspectives that law enforcement has are questions they're still trying to get answers to, because it's new. We're always willing to work with them, because we're trying to be like any other business and be good stewards in the community and work with our elected officials and law enforcement however we need to.

"The industry feels overall transparency is important. The folks involved in this business want lawmakers and elected officials to be able to see what it is they actually do. They want them to be well informed when they start trying to pass laws or tweak things within code."

As more lawmakers and officials become educated as to the true nature of the industry, Riddle says, it will have a trickle-down effect to those members of the general public who still hold an unfavorable view of medical marijuana.

"I think this is part of taking the 'Cheech and Chong' perception out of there and showing there are the Martha Stewarts of the world utilizing this product," he says. "There are many people that critics don't expect, probably more than ever, who use the product. When people learn about that, they're like, 'Wow. Maybe I need to look at this a little more closely.'"