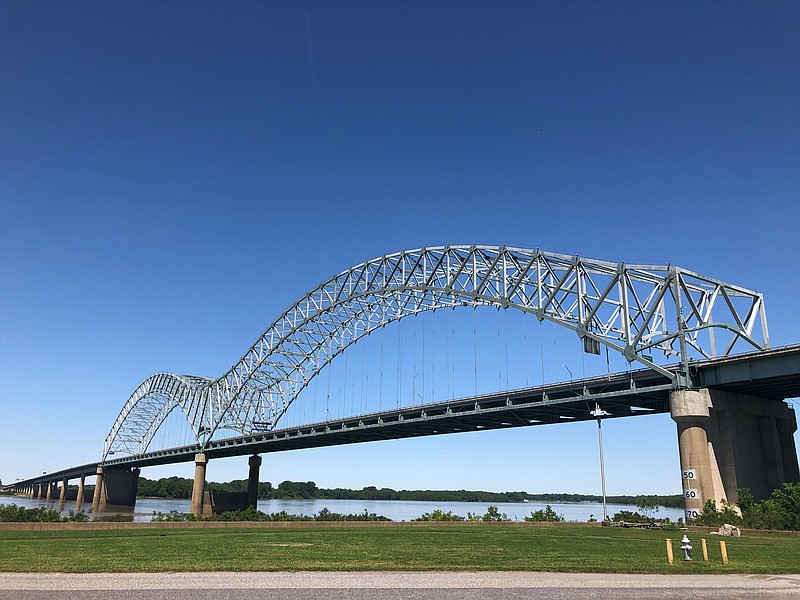 FILE - This Friday, May 14, 2021 file photo shows the Interstate 40 Bridge linking Tennessee and Arkansas in Memphis, Tenn. U.S. Transportation Secretary Pete Buttigieg will visit the Interstate 40 bridge connecting Tennessee and Arkansas that's been indefinitely closed after a crack was found in one of its steel beams. The U.S. Department of Transportation on Friday, May 28, 2021 announced that Buttigieg will visit Memphis on June 3 to see the bridge spanning the Mississippi River.(AP Photo/Adrian Sainz, File)

WASHINGTON -- Transportation Secretary Pete Buttigieg said Sunday that time is running short for a bipartisan deal on infrastructure, indicating that President Joe Biden will look to act without Republican support if there is no consensus when Congress returns from its Memorial Day break.

"By the time that they return, which is June 7 ... we need a clear direction," Buttigieg said. "The president keeps saying inaction is not an option. And time is not unlimited here." He said the American people "expect us to do something."

"This is a moment for a generational investment in American infrastructure," Buttigieg said. "Otherwise, we'd be going into all this trouble having all these conversations and doing all this work, just to stay in 13th place as a country.

[Video not showing up above? Click here to watch » https://www.youtube.com/watch?v=DpJuk5hCfa8]

"I don't think that's what the president wants. And I hope that's not what the congressional leaders want either."

Biden plans to meet with the lead Republican negotiator, Sen. Shelley Moore Capito of West Virginia, this week and says he remains open to hearing from other GOP senators who are working on different proposals. But Biden has been watching the dwindling timeline for a deal, with an early June hearing scheduled on a House transportation bill that is widely seen as a building block for the big package he favors.

Democratic senators also plan on moving forward on the infrastructure package "with or without the support of Republican senators," Senate Majority Leader Charles Schumer, D-N.Y., wrote to Democrats on Friday. Biden had originally set a Memorial Day deadline for reaching a deal.

The two sides remain far apart. Republican senators last week outlined a $928 billion infrastructure proposal as a counteroffer to Biden's $1.7 trillion proposal -- reduced from his opening bid of $2.3 trillion. And Republicans said they would not go along with his plans to raise the corporate tax from 21% to 28% to pay for new spending.

Republicans want to shift unspent covid-19 relief dollars to help cover the costs, a nonstarter for many Democrats and a proposal that Biden is finding unworkable, a White House adviser said Friday.

Buttigieg also seemed to reject the idea of taking money out of funds already committed to pandemic relief. "We don't have to spend those same dollars twice," he said. "Let's keep our commitments."

Capito said Sunday that she remained hopeful the two sides can move closer to agreement.

"I think we can get to real compromise, absolutely, because we're both still in the game," she said. "I think the president told me himself that let's get this done. We realize this is not easy. I think we bring every idea that's on the table into the negotiations to see how we can achieve this and get it across the threshold."

Capito said Republicans still disagree with Biden on what should be considered infrastructure, saying it should focus on the "physical core idea" such as roads, bridges, ports and even newer things such as broadband, but not elder care as Biden proposes.

Biden also wants funding to eliminate all lead pipes in the country, as well as investments in climate-related initiatives, veterans hospital infrastructure and disabled care.

Buttigieg defended the inclusion of elements beyond the traditional.

"We think of it as infrastructure because infrastructure is the foundation that lets people participate in the economy," Buttigieg said of funding for things like elder care.

"Somehow we're one of the only developed countries that doesn't take care of this. That's holding you back the same way it holds you back if you don't have a road or bridge to get to where you want to go," he said.

Capito said she believes the president's heart is in the bipartisan talks, and that there remains a "hunger for bipartisanship." "I think that's what we see and, in fact, we are inching towards one another," she insisted.

"If in the end there's no deal, it won't be for a lack of effort," Capito said.

Buttigieg said while Republicans "philosophically seem to agree that trillion-dollar investments are the kind of thing we need to be doing right now," there is "a lot of daylight" between the two sides, such as investments to boost the electric vehicle market to shift Americans away from gas-powered cars to stem greenhouse gas emissions.

The GOP plan amounts to about $250 billion in new spending, far from the president's approach. Buttigieg emphasized the view that the plan needs to make investments over and above what would have been spent anyway.

"I think we are getting pretty close to a fish-or-cut-bait moment," he said, though he quickly added a conciliatory note that "on the fishing side of things, the negotiations have been healthy."

"We believe in this process," Buttigieg added, "but also very much agree that this can't go on forever."

She said it was time for Democrats to pass Biden's broader infrastructure plan, even without Republican support, through a budget maneuver that requires only a simple majority in the Senate.

Gillibrand noted that only six Senate Republicans voted with Democrats to support the creation of a bipartisan commission to investigate the Jan. 6 insurrection.

"That's a problem. And I don't think there's necessarily goodwill behind all negotiations," she said. "And I think the American people elected us to solve the problem of covid, to rebuild the economy, rebuild the infrastructure, and I think it's our moment to act."

The senator did not answer directly when asked whether she thought Republicans were negotiating the infrastructure plan in bad faith.

"To me, it means we're about to miss the moment that we have to answer the need of this country," Gillibrand said. "We are in an important -- an important time, where people need government to work for them. And so we have to answer that moment with bold reforms. And I think waiting any longer for Republicans to do the right thing is a misstep. I would go forward."

Information for this article was contributed by Hope Yen, Jonathan Lemire and Lisa Mascaro of The Associated Press; by Amy B Wang, Steven Zeitchik and Cat Zakrzewski of The Washington Post; and by John Tozzi and Yueqi Yang of Bloomberg News (TNS). 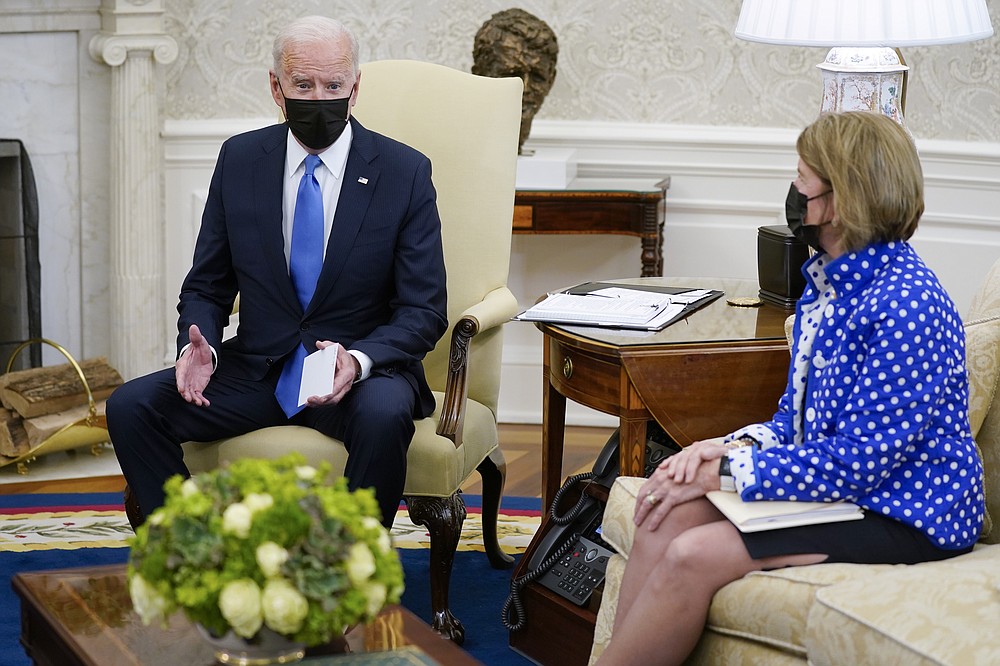 Sen. Shelley Moore Capito, R-W.Va., right, listens as President Joe Biden speaks during a meeting with Republican Senators in the Oval Office of the White House, Thursday, May 13, 2021, in Washington. (AP Photo/Evan Vucci) 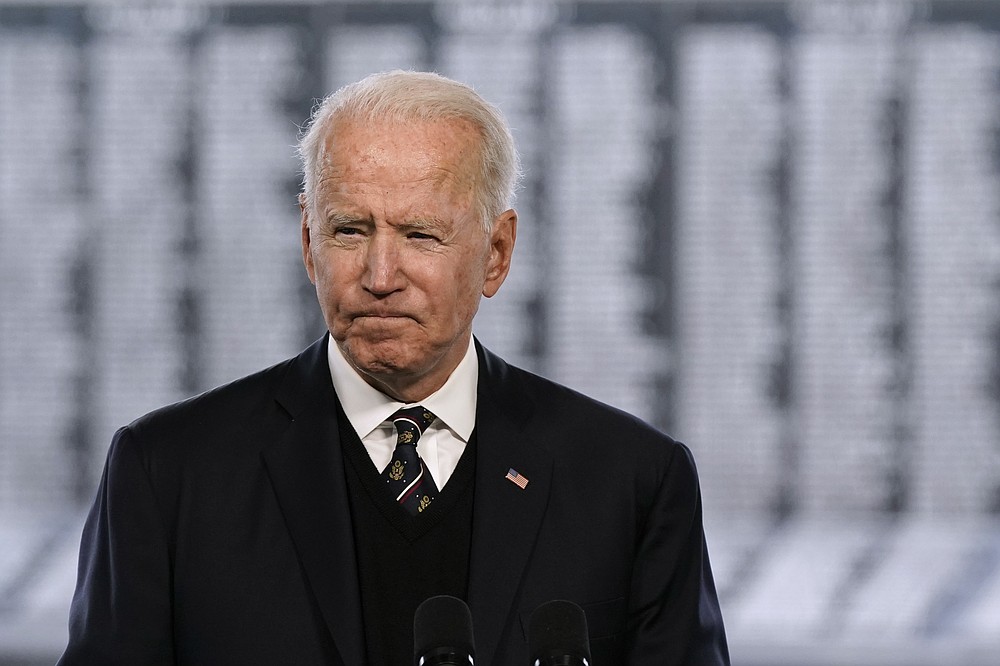 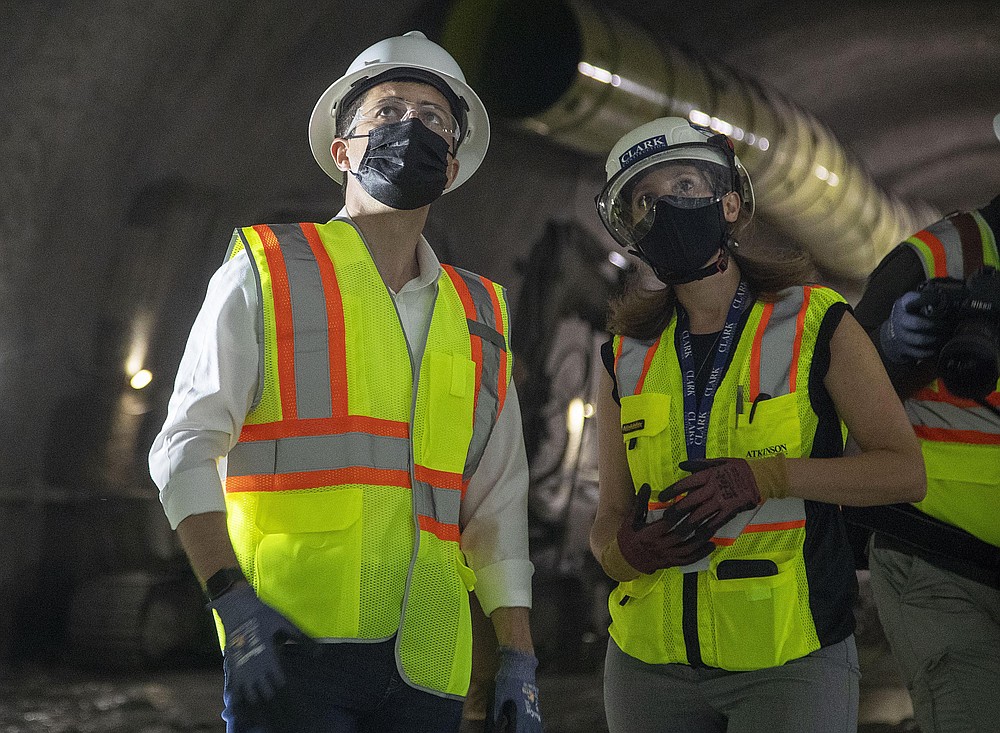 Construction project manager Gabrielle Ferro, second right, speaks with U.S. Secretary of Transportation Pete Buttigieg, during a tour of an underground tunnel for the expansion of the Hartsfield–Jackson Atlanta International Airport plane train tunnel at the Hartsfield–Jackson Atlanta International Airport, Friday, May 21, 2021, in Atlanta. (Alyssa Pointer/Atlanta Journal-Constitution via AP) 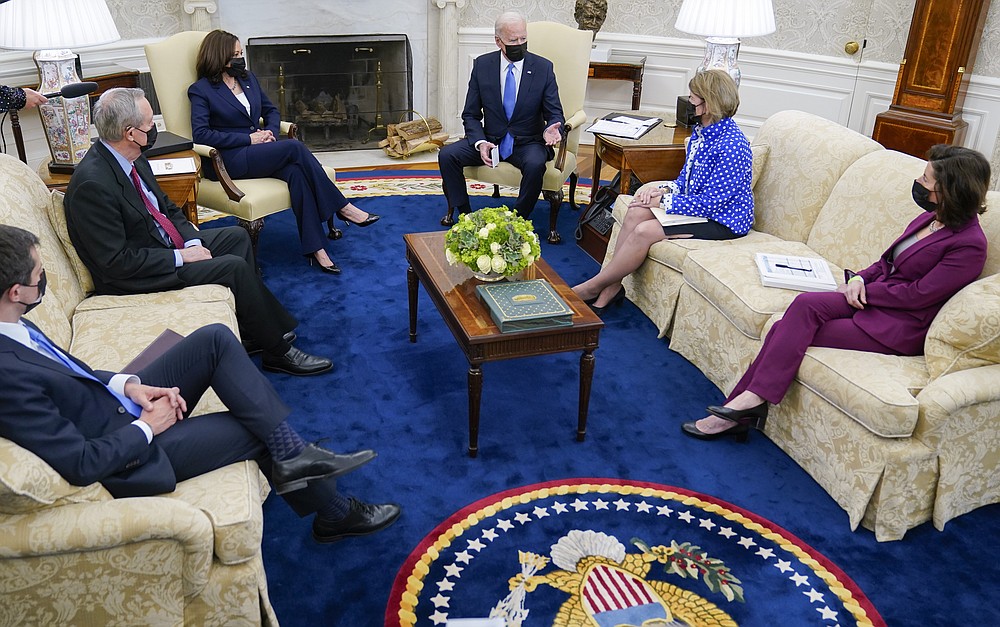 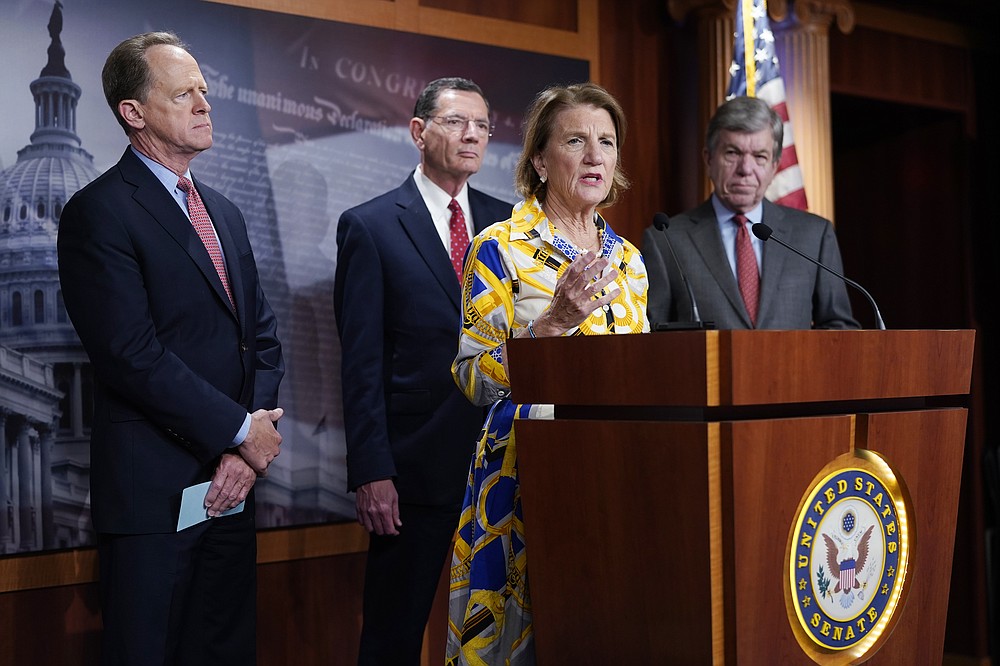 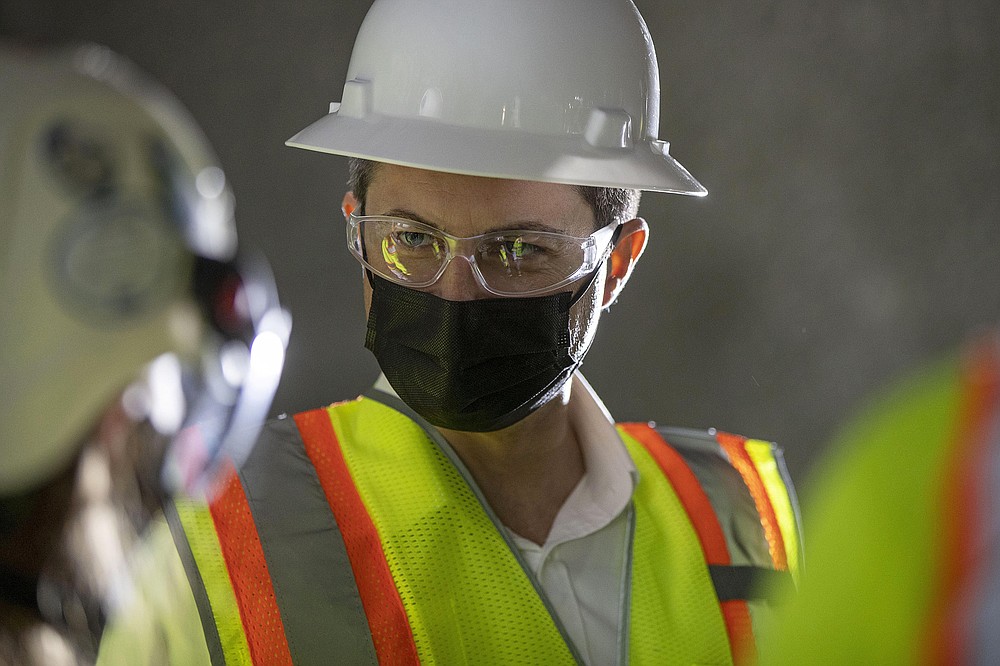 U.S. Secretary of Transportation Pete Buttigieg receives a tour of an underground tunnel for the expansion of the Hartsfield–Jackson Atlanta International Airport plane train tunnel at the Hartsfield–Jackson Atlanta International Airport, Friday, May 21, 2021, in Atlanta. (Alyssa Pointer/Atlanta Journal-Constitution via AP)
ADVERTISEMENT