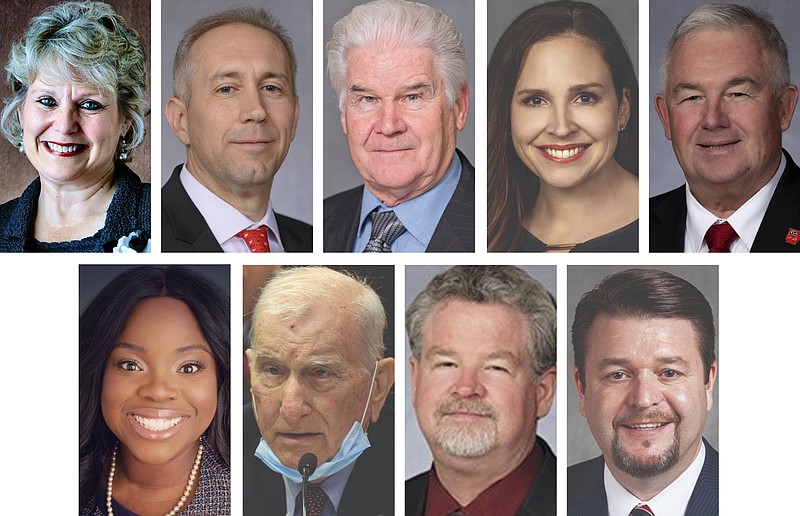 During this year's regular legislative session, state Rep. Denise Garner, D-Fayetteville, voted for legislation that will bar many public employees, including teachers, from participating in collective bargaining through a union.

On the same day in March, she also voted for legislation that will deter schools from allowing transgender girls and women to play on the sports teams that align with their gender identity.

The next day, Garner said in a post on Facebook that "yesterday in session, I pushed the incorrect button on two important votes."

"I only know because friends who know me well pointed out to me the discrepancy in my views and my vote," Garner said in the Facebook post. "Yes, I do usually check the board after votes because it's easy to miss the correct button, but frankly it's been too depressing to look. I will not make that mistake today! (Or hopefully again)."

She said in the Facebook post that she "wanted to make sure you all know that I haven't gone off the deep end yet and still feel passionately that discrimination is never OK, trans rights are human rights and teachers have as much right to collective bargaining as law enforcement and firefighters."

Garner said in a letter dated March 23 to House Chief Clerk Sherri Stacks that "it was my intention to vote 'no'"on Senate Bill 341 and Senate Bill 354.

SB341 by Sen. Bob Ballinger, R-Ozark, will bar certain public employees from collective bargaining through a union. It is now Act 612.

SB354 by Sen. Missy Irvin, R-Mountain View, will deter schools from allowing transgender girls and women to play on sports teams aligning with their gender identity. It is now Act 461.

"I just screwed up," Garner said Thursday in an interview. "The buck stops here."

Garner's letter is one of 20 that representatives submitted to the House's chief clerk about their voting in this year's regular session.

The letters don't change the outcomes or alter the vote tallies. But they are designed to correct the record, to respond to criticism or to deflect future political attacks.

Garner is one of seven representatives who submitted letters to the chief clerk about two of their votes in this year's regular session.

State lawmakers invariably make voting mistakes in each regular session, with the large number of bills being considered and with their varying levels of complexity.

On the other side of the Capitol Rotunda, state senators submitted six letters to Secretary of the Senate Ann Cornwell during the regular session.

Sens. Alan Clark, R-Lonsdale, and Jason Rapert, R-Conway, each submitted two letters about their votes in this year's session.

The number of letters filed in each chamber has varied widely during the past decade.

The Senate has 35 members. The number of letters filed in the Senate has declined significantly since a voting screen was installed after 2013.The screen allows senators to see how voice votes are recorded.

Although senators vote by speaking, representatives vote by pushing a button.

"At the time of each vote, I was in the Senate Public Health, Welfare and Labor Committee presenting two bills," Boyd said.

SB379 by Sen. Kim Hammer, R-Benton, increased legislative influence over the governor's declarations of public-health emergencies and the state Department of Health's directives. The bill is now Act 403.

Boyd said he filed the letter to make clear how he intended to vote on the bills in case somebody raises questions about his not voting on them.

Fortner was recorded as one of seven representatives not voting on his own House Bill 1004, which will prohibit Level 3 and 4 sex offenders from entering publicly owned water parks. State law prohibits sex offenders from public parks with a pool. The measure will expand the definition to include parks with wave pools, splash pads, waterslides or any "other area dedicated to aquatic activities for children."

He said he presented his bill to the House chamber but didn't return to his seat in time to vote for the bill. His seatmate, Rep. Kendon Underwood, R-Cave Springs, didn't push Fortner's button for him.

Fortner voted against House Bill 1069 by Rep. Aaron Pilkington, R-Clarksville, which will allow pharmacists to dispense birth-control pills without a prescription. The legislation limits pharmacists to dispensing no more than six months of pills before requiring a woman to visit a doctor. Only women over 18 will be able to get medication directly from a pharmacist. The bill is now Act 408.

In a letter dated March 8, Fortner told Stacks: "I am writing this letter in regard to my 'nay' vote on House Bill 1069. It was my intention to vote 'yea' on this bill."

"I just hit the wrong button," he said.

Hudson said in a letter to Stacks, dated April 9, that "it was my intention to vote 'no'" on House Bill 1525 by Rep. Robin Lundstrum, R-Elm Springs, but she voted for the bill.

The legislation criminalizes smoking medical marijuana in places where public inhalation is prohibited under constitutional Amendment 98, which legalized medical marijuana, and prohibits the transportation of more than 5 ounces of the drug, except by a licensed cultivator or dispensary. The bill is now Act 1062.

Hudson said she thought the House was voting on another bill when she voted for HB1525. She said she intended to vote against the bill because she doesn't believe the Legislature should chip away at Amendment 98 in a way that is contrary to the intent of voters.

She wrote another letter about Senate Bill 654 by Sen. Greg Leding, D-Fayetteville, which will allow the period for a visiting qualifying patient registry identification card for medical marijuana to be extended to 90 days. The bill is now Act 1028.

In a letter to Stacks dated April 23, Hudson wrote, "I was away from the chamber when Senate Bill No. 654 was up for a vote.

Smith said in a letter dated March 17 to Stacks, "At the time of the vote, I was out of my seat and my seatmate inadvertently voted Yes" on House Bill 1371 by Rep. Ken Bragg, R-Sheridan.

The bill would have funded private school tuition for qualifying students with up to $4 million in state income tax credits. It failed to clear the House in a 44-52 vote.

"[H]ad I been in my seat I would have voted No," Smith wrote.

Smith said in a letter dated March 3 to Stacks that "I was called away from my seat during the vote on Senate Bill 174," which eliminates the one-month separation period between retirement and reemployment for Arkansas Teacher Retirement System members who are 60 or older and have at least 38 years of service, effective Sept. 1. The bill by Sen. Larry Teague, D-Nashville, is now Act 290.

"Had I been in my seat, I would have voted yea," Smith wrote.

Scott said in a letter dated April 5 that she voted against House Bill 1680 and that "it was my intention to vote yes on HB1680."

Scott said she hit the wrong button when she voted.

She said in a letter dated April 27 to Stacks that "It was my intention to vote 'no' " on House Bill 1598 even though she voted for the bill.

Scott said she was confused about the difference between this bill and a related bill that she supported, and she later realized that she was opposed to HB1598.

"In regard to my present vote on Senate Bill 389," Wooten wrote to Stacks in a letter dated April 1, "It was my intention to vote yes on SB389."

The bill by Ballinger will require Arkansas schools to notify parents and allow them to inspect materials before their children take part in lessons or activities dealing with off-curriculum topics related to sex education, sexual orientation and gender identity. The bill is now Act 552.

Wooten is listed on the General Assembly's website as voting for the bill.

He said Thursday that he wasn't sure whether he had voted on HB1726 at that time because he was talking to Rep. Nelda Speaks, R-Mountain Home, and he asked for a letter to be drafted to show he supported the bill in case he didn't vote on it.

"I would like the record to reflect that I had been called out of the chamber at the time of the roll call and would have voted yea on the bill," he wrote. The bill will bar a medical provider from performing an abortion unless the provider verifies that the patient has received a resources access assistance offer. The bill is now Act 90.

"I would like the record to reflect that I had been called out of the chamber at the time of the roll call and would have voted yea on the bill," he wrote. The bill will require a doctor to do an in-person exam of a woman and get her blood type before giving her an abortion pill. The bill is now Act 562.

Clark said that any time he misses a vote on a bill involving an issue important to him, he tries to have a letter drafted to show how he would have voted.

Rapert said in a letter dated April 2 to Cornwell, "I was called out of the chamber when House Bill No. 1451 was passed on April 1, 2021, using the rolled vote process." All 35 senators were recorded as voting for the bill.

"I would like a letter for the record showing I would have voted 'present' on this bill," he wrote in his letter.

The bill by Rep. Megan Godfrey, R-Springdale, will permit public schools in the state to adopt a bilingual or dual-language immersion program approved by the state Division of Elementary and Secondary Education. The bill is now Act 663.

Asked about why he submitted that letter, Rapert said Friday in a text message that the "automatic rolled-vote process when used in the Senate occasionally results in members having to clarify their actual position on certain bills."

"We deal with thousands of bills every session and every now and then I decide to submit a letter to the Senate Journal for clarification if needed," he said.

"I voted 'no' and I was correctly recorded as voting 'no.' My no vote was only made to reflect Senator Gilmore being the first of the newly elected senators to run a bill," he wrote. "It is customary to give the first bill presented by a newly elected senator a hard time," he said, and his letter is intended to "show my complete support for Senate Bill No. 145."

The bill will change the Arkansas Emergency Management Assistance Compact to comply with changes to the national standards. The bill is now Act 71.