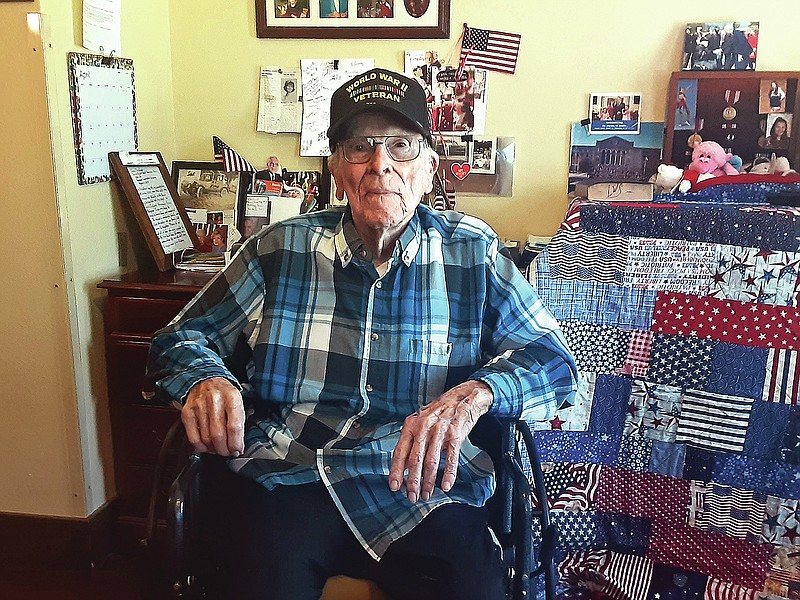 Louis Strickland's lasting memories of World War II aren't of battles or parades but of camaraderie and suffering the war brought.

He recalls his fellow soldiers' pranks, and he remembers the children of France and Belgium newly orphaned by war.

At 101 years old, Strickland will be one of the few World War II veterans who will be commemorating Memorial Day in Arkansas today. Strickland recalls his experience during the war as "some fun, but mostly death."

Memorial Day, which began after the Civil War to commemorate fallen soldiers, is a solemn day for veterans and families. Trumpeters play taps, families lay wreaths and many speak of the fallen.

While similar to Veterans Day, Memorial Day is dedicated specifically to those who died serving the country.

From his room at the Arkansas State Veterans Home in North Little Rock with his medals on display, Strickland, a deeply religious man, perhaps holds his certificate commemorating his attendance record at Immanuel Baptist Church as one of his greatest achievements.

A mechanic from Little Rock, Strickland enlisted in the U.S. Army Air Corps where he worked on planes, such as the Douglas A-26 Invader, serving from 1942 to 1945. Strickland served in England, France and Belgium during the war.

He enlisted in the Army along with his friends, thinking his experience fixing engines could be of some use in the Air Corps.

Strickland's daughter, Susanne Turner, said her dad was like a "typical World War II veteran" who "never talked about the war."

After the war, Strickland went back to work for the shop his father owned, rebuilding car engines.

Strickland moves from memory to memory of the war, from fellow soldiers stuffing his pockets with wrenches as a gag to the German bombs and the toll the destruction of war had on servicemen and civilians.

"Well, when you see how many of them were killed -- it's just sickening," Strickland said.

For Sean Daniels on Memorial Day, he remembers his brother Sgt. Jamar Hicks' smile and the hugs he'd give.

Hicks of Little Rock was wounded in Afghanistan in 2013 after his unit came under fire in Paktia province. He later died at Forward Operating Base Salerno in Afghanistan at the age of 22.

Daniels and his mother still celebrate Hicks' birthday and visit his grave to pray. Daniels feels like more could be done to commemorate both servicemen and women.

Nate Todd, the secretary for the Arkansas Department of Veteran Affairs and a retired Army colonel, said on Memorial Day he will be thinking about Col. Brian Allgood, whom he served under in South Korea.

Allgood, a graduate of the U.S. Military Academy at West Point, was the top medical officer in Iraq where he died after his Black Hawk helicopter was shot down in 2007.

On Friday, Todd said he walked through a veterans' cemetery, noting the recent burials of veterans from the Vietnam War and Gulf War.

"They may have not been special, they may not have been [more] special than any other American, but what they did was special," Todd said. "They served our country in order for us --and not only our nation -- but for the world to have the freedoms that many enjoy."