South Africa under stricter lockdown as leader warns of surge 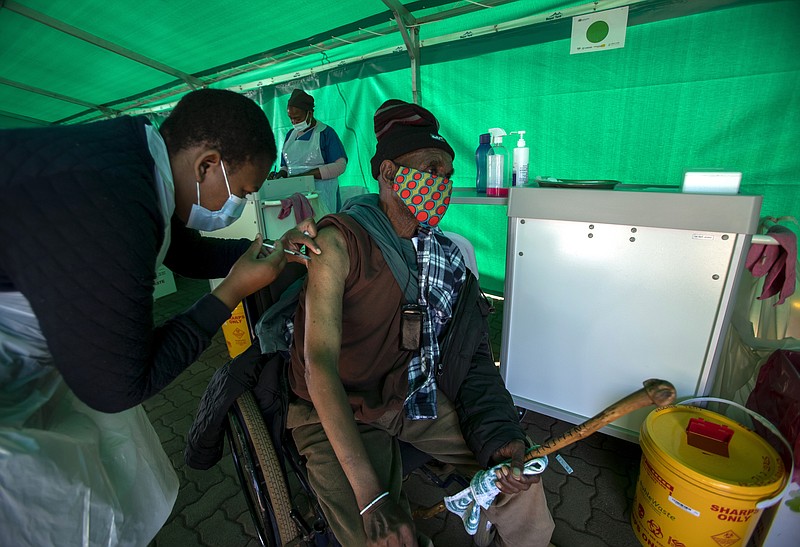 A health worker vaccinates a retiree with a the first dose of the Pfizer coronavirus vaccine inside a tent, during a mass vaccination program for the elderly at the clinic outside Johannesburg, South Africa, Monday, May 24, 2021. South Africa aims to vaccinate 5 million of its older citizens by the end of June. (AP Photo/Themba Hadebe)

CAPE TOWN, South Africa -- South African President Cyril Ramaphosa announced Sunday that his country will return to stricter lockdown measures in the face of a sharp rise in covid-19 cases that indicate the virus is "surging again" in Africa's worst-affected nation.

"We do not yet know how severe this wave will be or for how long it will last," he said.

[Video not showing up above? Click here to watch » https://www.youtube.com/watch?v=1rwMzeHfh88]

In response, Ramaphosa said that beginning today the nighttime curfew will be extended by an hour to run from 11 p.m. to 4 a.m. A maximum of 100 people will be allowed at indoor social gatherings and no more than 250 at an outdoor gathering. The number of people attending funerals is limited to 100, and after-funeral gatherings are banned, he said. Nonessential businesses must close by 10 p.m.

"We have tended to become complacent," Ramaphosa said, warning that virus infections are surging at a time when the country moves into its winter months and people are more likely to gather indoors, likely further increasing infections.

South Africa's decision to go back to a stricter lockdown reinforces -- as the crisis in India has already done so starkly -- how the global pandemic is far from over.

"We have seen in other countries the tragic consequences of leaving the virus to spread unchecked," Ramaphosa said. "We cannot let our guard down."

South Africa has more than 1.6 million confirmed covid-19 cases and more than 56,000 deaths -- more than 30% of the cases and 40% of the deaths recorded by all of Africa's 54 countries, according to the Africa Centers for Disease Control and Prevention. South Africa recorded 4,515 new cases over the past 24 hours and Ramaphosa said the "positivity rate" among tests conducted was now "a cause for concern."

South Africa had been under lockdown level one, the lowest of its five levels, but was now reverting to an "adjusted level two," Ramaphosa announced. Authorities did stop short of reimposing the strict measures such as limits on people's movements during the day and a ban on alcohol and tobacco sales that were in place at times last year.

South Africa has seen two previous surges in infections, the first in the middle of last year and a second, much-worse wave in December and January, when the emergence of a variant pushed infections and deaths to higher levels than the first surge. The virus is currently following "the same trajectory" as those waves, Ramaphosa said.

Experts have warned that this wave, arriving with the Southern Hemisphere winter, might be even worse.

Only about 1.5% of the country's 60 million people have received a vaccine. Health workers were the No. 1 priority, but fewer than 500,000 of the 1.2 million health workers have been vaccinated with the Johnson & Johnson one-dose shot. South Africa began vaccinating its elderly citizens only two weeks ago.

In total, 963,000 South Africans had received a vaccine by Sunday, the government said, with half of those having received only the first of two doses of the Pfizer-BioNTech vaccine.

South Africa has secured more than 50 million vaccines, Ramaphosa said, but currently has only 1.3 million doses in the country that are ready to be rolled out. More Pfizer-BioNTech doses are expected to arrive this week, and weekly after that, he said.

South Africa hopes to vaccinate 40 million people by the end of the year, a target that looks increasingly unlikely.

In Britain, meanwhile, the government may require National Health Service workers to be inoculated -- a contentious proposal that was immediately criticized by opposition leaders as counterproductive.

The U.K. government's vaccine minister, Nadhim Zahawi, told Sky News on Sunday that officials were considering the move in hopes of preventing medical workers from spreading covid-19 to their patients. The government has already asked the public to comment on a similar requirement for care-home employees.

"It's absolutely the right thing and would be incumbent on any responsible government to have the debate, to do the thinking as to how we go about protecting the most vulnerable by making sure that those who look after them are vaccinated," Zahawi said. "There is precedent for this. Obviously, surgeons get vaccinated for hepatitis B, so it is something that we are absolutely thinking about."

British authorities are scrambling to protect their plans to lift all restrictions June 21, allowing people to enjoy the summer holidays, amid concern about a fast-spreading variant that was first discovered in India. New infections and coronavirus-related deaths have risen over the past week, though the current figures are still a fraction of the levels reported during the January peak.

While Britain has Europe's highest coronavirus death toll, at more than 128,000 people, public health officials say the situation has improved since last winter because of the rapid rollout of vaccines. More than 74% of British adults have received at least one shot.

The opposition Labour Party was quick to condemn the proposal for compulsory vaccinations, saying it would be better to work with staff to address their concerns than to force them to get the shot.

"Given we have got a recruitment crisis in parts of the NHS, I think it's far more important we try and work with staff rather than against them," said lawmaker Thangam Debbonaire, a party spokesperson. "Threatening staff, I don't think, is a good idea."

Information for this article was contributed by Gerald Imray and Danica Kirka of The Associated Press. 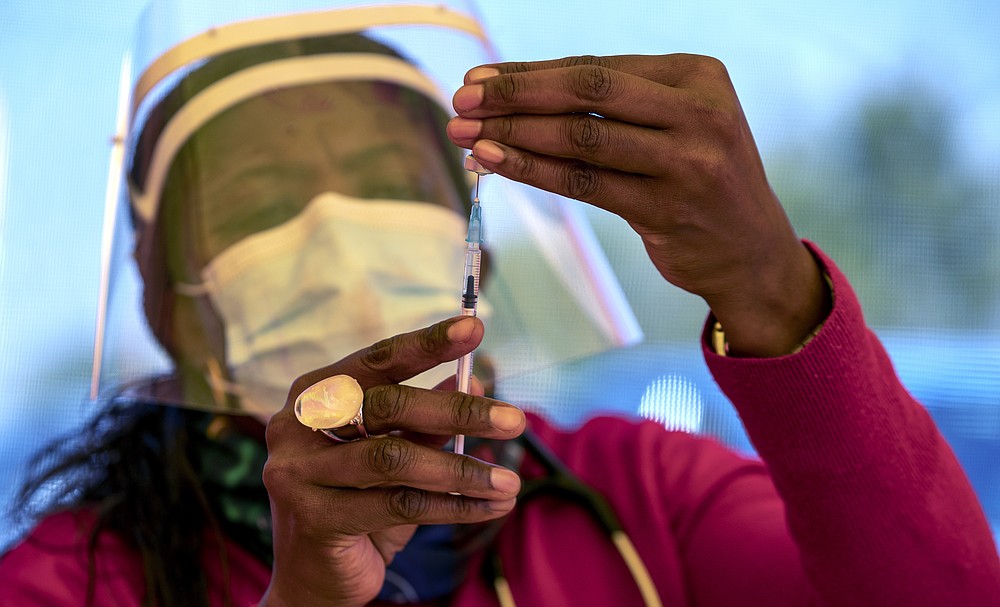 A health worker prepares a dose of the Pfizer coronavirus vaccine at the newly-opened mass vaccination program for the elderly at a drive-thru vaccination center outside Johannesburg, South Africa, Tuesday, May 25, 2021. South Africa aims to vaccinate 5 million of its older citizens by the end of June. (AP Photo/Themba Hadebe) 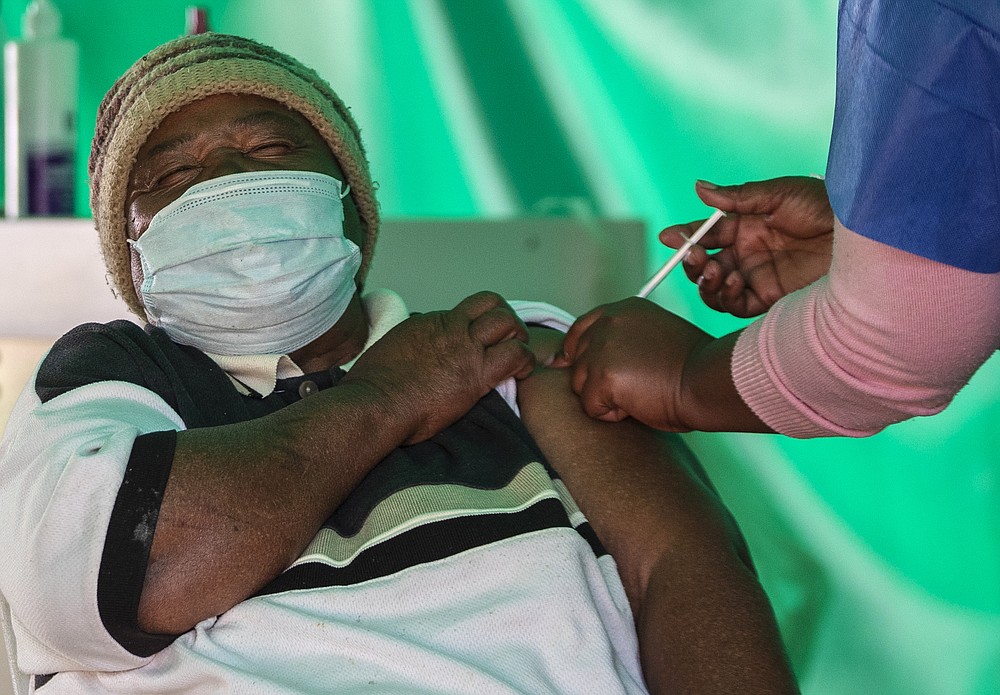 A retiree receives the first dose of the Pfizer coronavirus vaccine from a health worker inside a tent, during a mass vaccination program for the elderly at the clinic outside Johannesburg, South Africa, Monday, May 24, 2021. South Africa is in a race against time to vaccinate as many people as possible with signs the virus may be surging again. (AP Photo/Themba Hadebe) 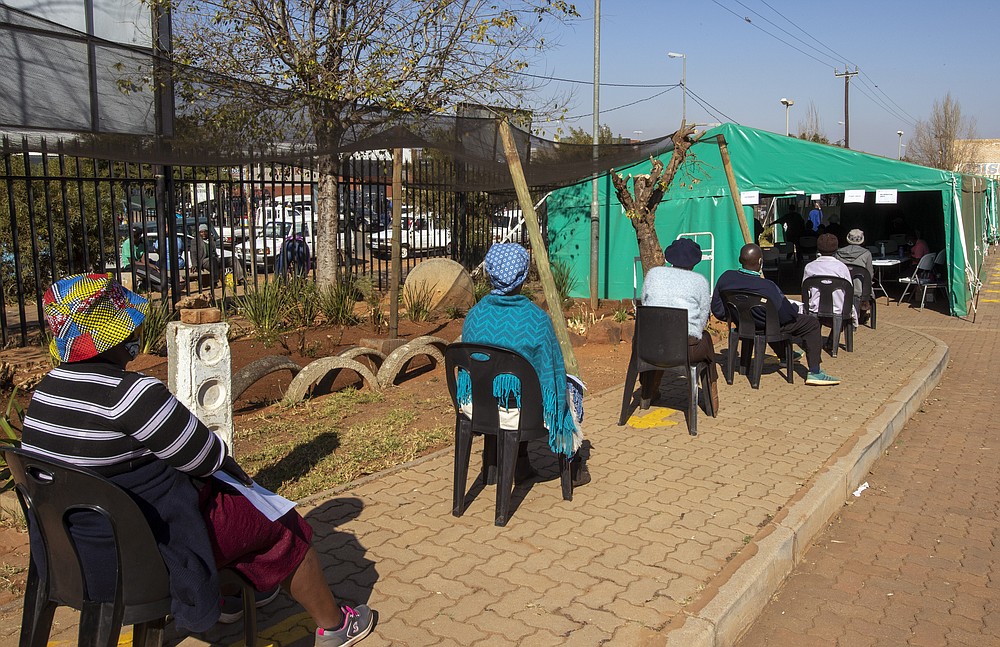 Retirees wait to receives a first dose of the Pfizer coronavirus vaccine in a tent during a mass vaccination program for the elderly at the clinic outside Johannesburg, South Africa, Monday, May 24, 2021. South Africa is in a race against time to vaccinate as many people as possible with signs the virus may be surging again. (AP Photo/Themba Hadebe)
ADVERTISEMENT