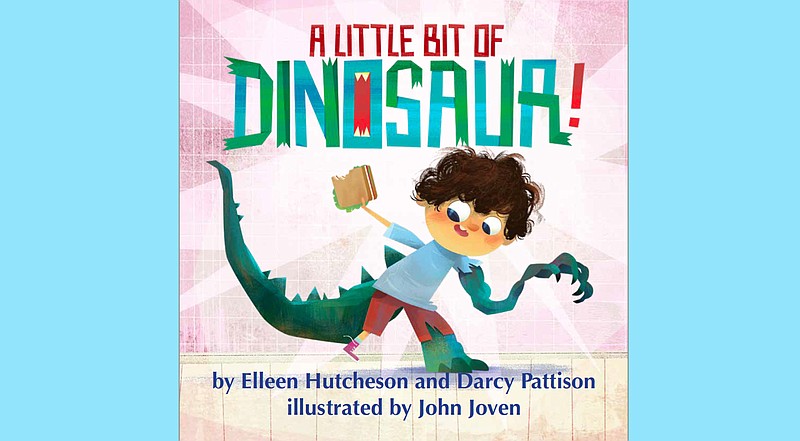 Arkansas sisters Elleen Hutcheson and Darcy Pattison have put their talents together with John Joven's jaunty, angular illustrations for an exuberant picture book that delivers lessons in science, nutrition and mortality.

The information is clear and boldly stated, and the illustrations rock, surprising us with the story of how minerals that once formed the skeleton of Tyrannosaurus rex might be part of the reader's body.

We see a chunky dinosaur that cheerfully ups and dies — tongue-out, visited-by-flies dead, with X's for eyes. Mud buries its bones, and geological stuff happens to create the Rocky Mountains.

Erosion slowly uncovers the fossilized T. rex toe bone until a stunned-looking atom of calcium dissolves out of the fossils and into the Arkansas River. The river whooshes the atom toward the Mississippi River via Colorado, Kansas and Oklahoma until a farm pump sucks the atom in with river water to irrigate an Arkansan's cornfield.

The farmer (and his cow) gleefully harvest the corn, and the cow eats the corn. Its body uses that little bit of calcium to make milk.

We see the farmer hand-deliver a wooden barrel of milk to a dairy, where a jerky-limbed, masked dairyman sends it through a four-station process that results in wheels of cheese. A trucker delivers the cheese, and Mom buys some from a storekeeper with a odd looking nose and beard.

Mom feeds a cheese sandwich to her child (representing us), and we see images of other fun dinosaurs that might be lurking in our bones.

And then comes the best part: We cheerfully die and are buried. I like our skeleton's shock of gray hair. Calcium leaches from our bones, too. The book ends on the vivid reflection that, possibly, calcium from our bones will become part of a whale.

Hutcheson taught high school science at Rogers for decades, winning a Christa McAuliffe Fellowship for Arkansas and also a Fulbright Memorial Fund Fellowship to study in Japan. According to a news release, she has traveled around the world, studying nature and science in Costa Rica, the Amazon rain forest and the Galapagos Islands.

Her sister Pattison is a well-known and award-winning children's author and writing teacher, with dozens of fiction and nonfiction picture books and many novels. Five of her books were honored by the National Science Teacher's Association as outstanding trade books, and one was reprinted in a Houghton Mifflin textbook. She has an Irma Black Honor award, a Eureka! Nonfiction Honor book, two Junior Library Guild selections, and two National Council of Teachers of English notable language arts books. She was a 2007 Arkansas Governor's Arts Awards honoree for her work in children's literature.

And it's fun to look at and to share.