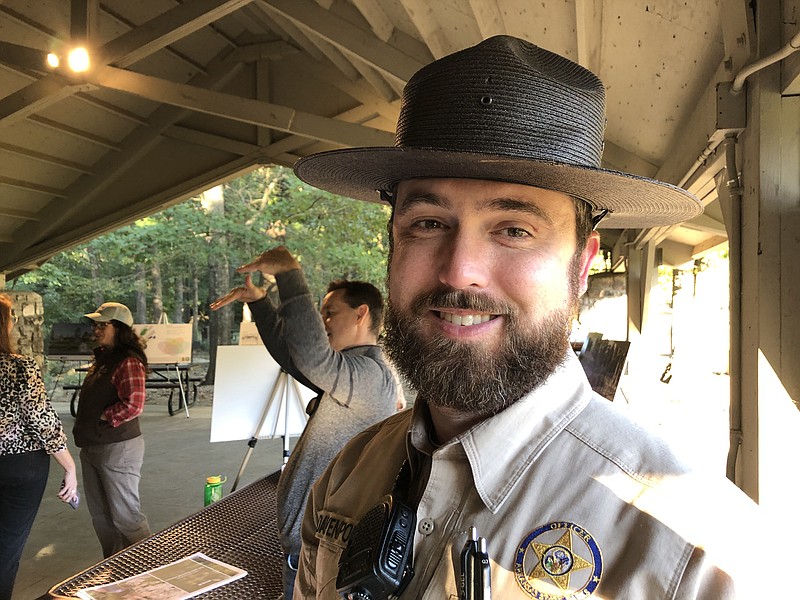 After daylight saving time ends on Sunday, it will be all but impossible to watch the sunrise from the top of Pinnacle Mountain legally. For a while.

"We are now," says assistant superintendent Cale Davenport, "right now, in a time frame where you can come to the park at opening — which is 6:30 a.m. — and have time to make it to the top of the mountain, watch the actual sunrise, and you don't violate the park's rules and regulations in any way."

Park in the lot, stroll up the big hill, look east over Central Arkansas and witness brilliance obliterating and then recoloring the horizon far beyond North Little Rock.

"Spring is another time when you're able to do that," Davenport says. "But there are large portions of the year when being in the park prior to sunrise is a violation of park rules and regulations."

This week, it's still possible to make a legal, 30-minute hike up Pinnacle Mountain to catch the sunrise. Or you could run up and take your time selecting a cozy rock.

But daylight saving time ends at 2 a.m. Sunday. Then sunrise and sunset will be about an hour earlier than they were the day before.

Rock-strewn and root-invaded, Pinnacle Mountain rises 756 feet above surrounding flood plain, and the two footpaths that lead to its peak have switchbacks and ankle-bending piles of tumbled or stacked boulders. According to data posted on the competition-tracking site Strava, West Summit Trail is about seven-tenths of a mile with a 21.4% average grade. Athletes' reports posted on Strata suggest that's at least a 9:11-minute run.

Google searches return a claim that two runners have made the west summit more than 2 minutes faster. But don't forget the time it could take to park and lock your car.

As the year ticks down to Dec. 31, sunrise will occur about a minute later every day, and that 30-minute sunrise stroll could become more doable again — unless there's ice.

"So we'll 'fall back' on Nov. 7, and at that point you won't be able to make it from the opening to the top in time for sunrise," Davenport says, deliberately repeating his point.

Repeatedly delivering the news that the park is not open before 6:30 a.m. is a routine part of his job. Especially among longtime users of the Arkansas State Parks' most popular day-use-only area, he meets patrons who don't realize park hours apply to them.

"Some individuals have been rather confrontational about it," he says.

The penalty for entering a closed state park varies based upon the violator's activity, he explains. "When the park is not open, people oftentimes illegally park along the highway or they illegally park on private property, and that is a parking citation. However, if you're caught in the park during the closed hours, that is criminal trespass."

It's not hard to find self-incriminating videos of joyful violators by searching YouTube for "sunrise at Pinnacle Mountain."

"I hate to be the bearer of bad news, but this is not an argument I'm going to lose," Davenport says. "It's not a gray area. It's a line in the sand."

When you've loved a state park most of your life, you can feel a wonderful, misleading sense of ownership. But no taxpayer owns Pinnacle Mountain, Davenport says. "I don't. You don't. We all do."

[RELATED: Lost on the Base Trail]

Print Headline: See Pinnacle sunrise while you can