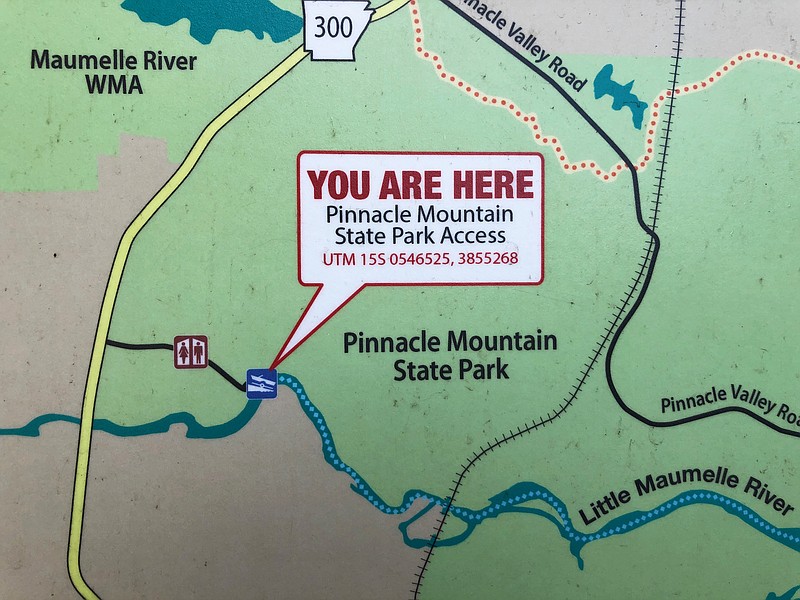 A map beside the Pinnacle Mountain State Park day-use boat ramp knows right where you are. (Arkansas Democrat-Gazette/Celia Storey)

Some people who wander are, in fact, lost.

"This is a loop. It should not be so difficult to find," an exasperated Bea Engelmann called to her husband, John, as they backtracked a second time Oct. 24 along what they thought was the Pinnacle Mountain State Park Base Trail.

"It's just supposed to go in a circle around the mountain."

In their early 60s, the couple are healthy hikers, but they hadn't planned on walking more than a few miles. After a weekend in Little Rock for the American Taekwondo Association's Martial Arts Fall Nationals, they drove 15 miles northwest of downtown to see the main attraction of Arkansas State Parks' most popular day-use area.

They figured a trek up the iconic peak would be a relaxing use of the Sunday afternoon before their drive home to Roswell, Ga.

Their son warned them not to tackle the arduous East Summit Trail, and so they did.

"It was almost like our son challenged us to do it," John explained.

They loved it. They left their car with its trunk full of water bottles at the eastern parking lot. Following red and white blazes, they clambered up and over what felt like more than three-quarters of a mile of rough and grainy sandstone boulders. They relished looking out over the Arkansas River Valley from atop the 756-foot peak.

Gallery: You are here

Consulting Google Maps, they hopped and hiked down the West Summit Trail, checked out the trail map at the potty house and decided to take the interesting Base Trail.

At first its lime green blazes and number-markers dunked in green paint assured them the root-wrapped and rocky path was indeed headed toward their car. To be safe, they asked a passerby who advised them to make sure they "turned left," but he didn't say where to turn left, and somewhere amid all that leafy green shade and blindingly bright bars of sunlight they went downhill when the trail went uphill.

Blazes faded away. The couple slowed their stroll, puzzled, on a smooth wash beside the smiling Little Maumelle River. Colonies of cypress knees jutted from tan water rippled by minnows, and everywhere they looked were keyhole trees.

Bea grew a bit concerned when she spotted a park bench on the hill far above, but she thinks about poison ivy a lot and so was not inclined to bushwhack uphill. Other park users appeared up there and called down assurances that if they just kept going as they were, the paths would converge.

The paths did not converge. But the sight of a recently chainsawed tree trunk looked hopeful, so they kept going and going, under a train trestle and beyond, heading for ... ?

In fact they were headed for the Arkansas Arboretum via a Central Arkansas Water and park maintenance track.

People who grew up running the old Base Trail would have known to backtrack or to bushwhack the few yards to the Little Rock & Western Railway tracks. Those tracks lead to Pinnacle Valley Road, and a short walk on its nonexistent shoulder would reach the East Summit parking lot.

But the Engelmanns were tourists. They crossed what looked like a power line corridor and ducked into some more woods. In there, they encountered a local who just happened to be trying to figure out how she'd lost her way on the Base Trail the week before. She was backtracking from the Arboretum to the mountain.

Together, they returned to the green-blazed Base Trail, learning in the process that its blaze paint is sometimes lime green but other times more like turquoise.

From a distance, Pinnacle Mountain never changes. Poking along Interstate 430, people look for it out the window of the car, and there it is, stolid, durable, reliable. But in reality, trails come and go.

When Pinnacle Mountain State Park opened in 1977, the Arkansas Democrat published a map of the mountain and its visitor center, which is not near the mountain. The visitor center is 3.7 miles from the day-use area — the part of the park most visitors visit.

Between 1977 and 1990, volunteers pushed a fishing path along the Little Maumelle River across the eastern foot of the mountain, creating a 1 ½ mile Base Trail. It tracked from a metal footbridge to the East Summit parking lot.

Also, 2.5 miles of the Ouachita National Recreation Trail hiked onto the northern foot of the mountain, crossed Pinnacle Valley Road and cut an almost secretive connection to the visitor center.

In March 2008, volunteers extended the Base Trail so it circled the mountain. In 2010, Joe Jacobs, Lisa Mullis and Daron Harris built the park's first mountain bike trails — Jackfork Trail and Rabbit Ridge.

In 2011, West Summit Trail got a face-lift. In 2012, volunteers rerouted the eastern section of the Base Trail, redirecting traffic uphill and away from the mud. (This is where the "turn left" advice the Engelmanns received comes in.)

Today, the 2,356-acre park has 10 or 22 named hiking and/or biking trails, depending on how you count them and not counting spurs and traces. And it is easier than ever before to wind up bewildered under a railroad trestle.

In October, parks officials unveiled architects' plans for a new, $8.7 million visitor center for the park, one situated on the western foot of the mountain near the day-use area. Arkansas Parks director Grady Spann said construction will begin this winter with completion expected in fall 2022 (see arkansasonline.com/1101park).

In her fifth year as a park interpreter, Kellie Nichols is excited about this plan. She's sure that funneling visitors past the center — with maps prominently on display — will help all the trails stay found.

She often fields calls from people who are lost in the park or looking for a faster way off whatever path they're on. She knows the park inside and out and can explain it thanks to lots of practice. "I can say, 'OK which signs are you at?' and they can tell me where they are, and then I can kind of guide them back to where they need to be," she says.

"Safety issues can be diminished just by having that centrally located access to information. It'll help a lot."

New wayfinding signs for the main trails and comprehensive maps are on the way. But other refinements are still in planning stages. One involves that water company maintenance track the Engelmanns wandered onto.

Jordan Thomas, design services manager for planning and development for Arkansas State Parks, says paving it from the day-use area to the Arboretum would create a link in the River Trail chain of multi-use trail segments from the new visitor center to downtown Little Rock.

"When you pull into the Arboretum Trail parking lot, there's a level, grassy area to your right that goes down what looks like a power line corridor. It's actually the Central Arkansas Water line corridor," Thomas said. "That's the main water line that conveys all of our fresh water to the city of Little Rock, and so that path is actually an access road to a maintenance road that goes down east of the Little Rock & Western railroad, runs alongside the creek and actually pops out by our boat ramp.

"There's already an existing four-wheeler tread that our staff uses for maintenance. It's not a designated trail, but a lot of people use it for fishing."

Paving that would take cyclists off a section of Pinnacle Valley Road where drivers don't have good sight lines.

"We're looking forward to working with the county on that," he said.

[RELATED: 7 warning signs you’re not on the Base Trail anymore]

Print Headline: The turn not taken