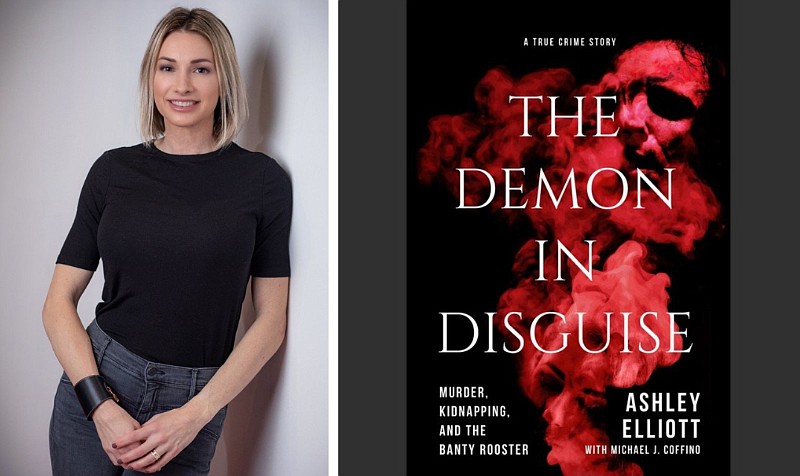 “I believe writing this book has been the greatest thing I could have ever done for myself,” Ashley Elliott (left) said of her reconciliation with the 2002 kidnapping of her mother and the killings of her father and his associate in Conway, as chronicled in her true-crime book, "The Demon in Disguise." (Arkansas Democrat-Gazette)

In the nearly 20 years since Conway saw its first double murder -- the 2002 execution-style killing of businessman Carter Elliott and his associate Timothy Wayne Robertson -- Ashley Elliott has struggled to heal from the trauma that the violence inflicted upon her family.

"I didn't process it at the time," Elliott said. "I was 25. I don't believe I ever processed it until now. I was experiencing PTSD [post traumatic stress disorder] and GAD [generalized anxiety disorder]. I've learned a lot about PTSD, what it does to you and the role it plays in your life."

In reclaiming her life, Elliott followed a friend's advice and put her pain into words. "The Demon in Disguise" -- a 243-page true crime story by Elliott and Michael J. Coffino that depicts the Conway murders, a kidnapping and the lengthy and slow ride through the justice system -- was released this fall by Koehlerbooks.

"I feel like I tried everything, did everything, and nothing could bring back my family," Elliott said. "I believe writing this book has been the greatest thing I could have ever done for myself. I reconciled my father's murder, Timmy Wayne's murder and my mother's kidnapping with myself and in the end, that is all the work I needed to do."

Elliott, who now lives in Utah, returned to Conway in mid-October for the book's release during a special event at the Faulkner County Library.

Carter Elliott, who was 49 at the time of his death, was a native of Helena and was the founder of Detco Industries, a Conway producer of industrial and household cleaners, insecticides and herbicides.

About 6:45 p.m. on May 19, 2002, a neighbor in Conway's upscale Shady Valley subdivision called 911 to say that "some girl" ran to his house screaming that "everybody had been shot in that house." (The girl was not Ashley Elliott.)

Minutes later, a first responder tells the dispatcher, "Go ahead and notify the coroner."

Carter Elliott and Robertson, who was 25 at the time, were found inside the home, both fatally shot in the back of the head and lying face-down in the living room.

Previous Arkansas Democrat-Gazette reporting on the case identified Robertson as a family friend who was being mentored by Carter Elliott and who even lived for a short time in Elliott's home.

Investigators quickly surmised that Carter Elliott was the target and that Robertson was simply in the wrong place at the wrong time.

Ashley Elliott described Conway in the book as "close knit," despite being a town with a population of more than 40,000 at the time, home to three universities and positioned to blossom "into a major economic and cultural" Arkansas hub. It now has a population of about 65,000.

"Conway is the Taco Bell drive-thru after midnight on a Friday night," she wrote. "Conway is playing cards for money, with modest limits, at the local Supper Club. Conway is hardworking families, conservative values and country music. Conway is church attendance on Sunday with hangovers from a late Saturday night rendezvous in Little Rock."

A month later, Lark Gathright-Elliott -- Ashley Elliott's mother and Carter Elliott's ex-wife -- was drugged and bound in her Salt Lake City home before she was kidnapped and held hostage in a Cedar Creek, Nev., home. She was rescued 48 hours later by sheriff's deputies.

Arkansas investigators had a suspect in the double homicide, but it would take more than a decade before he was brought to justice.

Richard Conte was a Carson City, Nev., emergency room physician in 2002 when he waited outside his ex-wife's Utah home before kidnapping her.

Conte and Gathright-Elliott got married in 2001, but the marriage lasted only a few months.

Ashley Elliott said that from Day 1, she couldn't fathom what her mother saw in her second husband.

Conte had a "disturbing fascination" with fake military regalia and fantasy role play, and he owned an arsenal of deadly weapons, Elliott said.

In a plea agreement with Nevada authorities, Conte agreed to forfeit more than 100 weapons and other items, including handguns, rifles, knives, Taser guns, a grenade and a grenade launcher, court documents show.

In previous news reports, Ashley Elliott said that Conte painted a picture of stability for her mother and offered her "all the things I would want for her."

During the courtship, he made a "huge effort to impress her, but he quit supporting her right after they got married," Ashley Elliott told reporters at the time.

Conte pleaded guilty to the kidnapping and was sentenced to 15 years in prison and to six years for unlawful administration of a controlled substance. The sentences ran concurrently.

Ashley Elliott said she immediately suspected Conte in the double murders after he kidnapped her mother.

The title of the book is based on Conte, Ashley Elliott said.

"Dick came into my life disguised as a caretaker, loving husband to my mom, my uncle's best friend, an ER doctor and a military man," she said. "Skeptical as I was, I allowed him to slither his way into our lives. Dick is the demon in disguise. In the end, he came to kill, steal and destroy all that I held so precious."

It took nearly a decade -- and two prosecuting attorney terms -- before Conte was charged with the double homicide in 2011.

H.G. Foster, 20th Judicial District prosecutor when the killings occurred, told the Democrat-Gazette in 2011 that he did not charge Conte in the deaths of Carter Elliott and Robertson when he was in office because Conte was already in prison and he felt there was insufficient evidence to win conviction.

On Aug. 26, 2011, two days before Conte was scheduled to be released from the Nevada prison system after serving nine years of his sentence for the kidnapping, then-Prosecuting Attorney Cody Hiland filed murder charges in Faulkner County Circuit Court.

The case against Conte was built on circumstantial evidence, with no forensic or eyewitness evidence.

Faulkner County Circuit Judge Troy B. Braswell Jr., then the deputy prosecuting attorney who tried the case against Conte, said at the time that despite the lack of new evidence or forensic evidence placing Conte at the residence where the homicides occurred, there was sufficient circumstantial evidence to charge and convict Conte on both homicide counts.

During the trial, prosecutors said Conte was so obsessed with his ex-wife that he left notes, cards and flowers in her home when she wasn't there and accessed emails she had sent to men he viewed as romantic rivals.

Braswell and Deputy Prosecuting Attorney Joan Shipley depicted Conte at trial as an avid gun collector and scorned lover who sought to impress Gathright-Elliott with wild tales of military adventures in foreign countries.

A surgeon also testified that it appeared Conte had made incisions in his own body to insert bullets so people would think he had been shot while on a mission in Afghanistan.

Circuit Judge Charles E. Clawson Jr. sentenced Conte to life in prison without parole and to two separate and consecutive 15-year sentences for using firearms in the commission of a felony.

The prosecution had previously waived the death penalty in the case.

In the book, Ashley Elliott writes about how she feels the case was mishandled from the start by the local "good ol' boys" network.

"I found a gun in my father's house after the crime scene had been turned back over to my family," Elliott said. "I believe my doubts about their job were normal. How does one overlook a gun at the scene of a murder? It just felt like the whole crime scene was a rushed job or at least that is my opinion."

Elliott considers herself a crime survivor and an advocate for victims. The impact on relatives of a victim is harsh and lasts a lifetime, she said.

Victims and their families need their own representation during their cases, Elliott said.

She said her family had that in Jim Barrett, the now-retired detective sergeant for the Conway Police Department.

"The investigators and Police Department, especially Lt. Barrett, built a rapport with our family," Elliott said. "He gave us hope, and sometimes a small glimmer of hope goes a very long way to a family so desperate for answers."

Elliott was never allowed in the courtroom during the trial, so she didn't get to hear the whole story unfold.

She credited current 20th Judicial Circuit Prosecuting Attorney Carol Crews and office administrator Sirena Moix for helping her after the trial to research the case.

"Victims of violent crime and their families are forever impacted by the actions of their assailants," Crews said when contacted. "The lifelong trauma victims endure is often overlooked by society, but I hope we increase our efforts to understand how crime forever changes a victim and is often something they carry with them forever. This is why it is such an honor to fight for them in court."