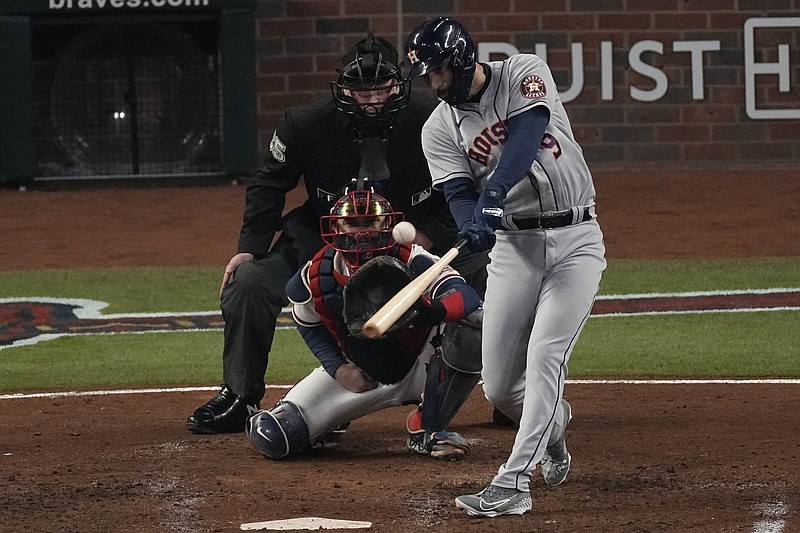 Houston Astros' Marwin Gonzalez hits a 2-RBI double during the fifth inning in Game 5 of baseball's World Series between the Houston Astros and the Atlanta Braves Sunday, Oct. 31, 2021, in Atlanta. (AP Photo/John Bazemore)

HOUSTON -- Houston Manager Dusty Baker appreciates his stars, but this time of year -- perhaps more than ever -- he's also a big fan of his role players.

He likened his bench players to a third-down running back in football or the sixth man in basketball.

"In every sport, these guys make the difference because you wear your stars out and they can't do it all the time," Baker said. "You have to have other guys on your team that you call upon, especially in a specialty situation."

That quality was on full display in Game 5 when the Astros staved off elimination with a huge assist from pinch-hitter Marwin Gonzalez. The utility infielder spent 2012-18 with the Astros, helping them make the turnaround from baseball's worst team to World Series champs.

He spent two seasons with the Twins before joining the Boston Red Sox this season. But he was released in August, and the Astros brought him back.

On Sunday night, Gonzalez blooped a two-out, two-run single in the fifth to give the Astros a 7-5 lead. It was the first hit of the series for Gonzalez, who also pinch-hit in Games 3 and 4.

"Your extra guys [are] the guys that put you over the top," Baker said.

Baker said he'd likely have third baseman Alex Bregman hit seventh again in Game 6 after moving him down to that spot for Game 5.

Baker dropped Bregman from third to seventh for Game 5 after he went 1 for 14 in the first four games of the series. The shakeup made a difference, with Bregman driving in Houston's first run Sunday night with a double in the second inning. The Astros were down 4-0 after a grand slam by Adam Duvall when Bregman got them on the board.

"He got the biggest hit of the night to me, up to that point, at least, to get us back in the game," Baker said.

Baker thought Bregman looked better in Game 5, but knows he has more work to do to keep it going tonight after starting the series in such a slump.

Baker also said Monday that he doesn't expect Jason Castro to return in this series after the backup catcher was dropped from the roster before Game 4 because of Major League Baseball's covid-19 protocols.

World Series visiting teams usually head home on charter flights that take off about 90-120 minutes after the final out, while the home team heading on the road travels on the day off. But this year, both World Series teams travelled on the rest day.

"I think, number one, there's a lot of kids traveling. The games are going until midnight or beyond, and they're going to get home, it's not going to be good sleep," Braves Manager Brian Snitker said Monday. "We're just more in tune with letting the guys get a good night's sleep. We're not going to do anything today anyway, most of them. This time of the Series, you're probably not going to work out."

Overnight travel can turn into a lengthy bus trip while teams can plan day-time travel at optimum hours.

"I think it's better than getting in at 5 or 6 in the morning and hitting rush-hour traffic," Snitker said.

The Astros didn't get back to Houston until late Monday afternoon, when Manager Dusty Baker addressed reporters on a Zoom call before going home.

"We didn't come back last night. That would have been back too late," Baker said. "Let the guys get semi rest. We came back, actually, right now. So I think that was a good choice."

There have already been two games in this World Series that went at least four hours -- Game 1, which went six minutes over that, and Game 5, which was exactly four hours. The average game time has been 3 hours, 41 minutes.

Both the Astros and Braves have used at least five pitchers in each game, but no more than six.

Asked if a pitch clock was needed to speed things up, Snitker -- who is familiar with those from managing in Class AAA -- said that's not really the issue in these long postseason games.

"I know these games are long because the time in between innings is really long and stuff like that that's added to it," Snitker said. "I like the flow when I experienced the pitch clock, but I don't know that's going to solve -- I mean, that's not the only thing that's going to solve the problem."

This will be the 69th time in the 117 World Series that a Game 6 will be played, and the third year in a row for there to be one. The last time the Fall Classic went at least six games three years in a row was 2001-03.

In the previous 68 times there has been a Game 6, the team with a chance to clinch in that game did so only 26 times (38.2%), including the Los Angels Dodgers over Tampa Bay last year. But teams with a 3-2 lead have gone on to championships 45 times overall (66.2%).

Atlanta has had a 3-2 Series lead four other times, and the Braves won Game 6 only once in those situations: against Cleveland in 1995 for their last championship. As the Milwaukee Braves, the franchise overcame a Game 6 loss to win Game 7 against the New York Yankees in 1957, but lost seven-game series to the Yankees in 1958. As the Atlanta Braves, they lost to Minnesota in 1991 after falling in Game 6. 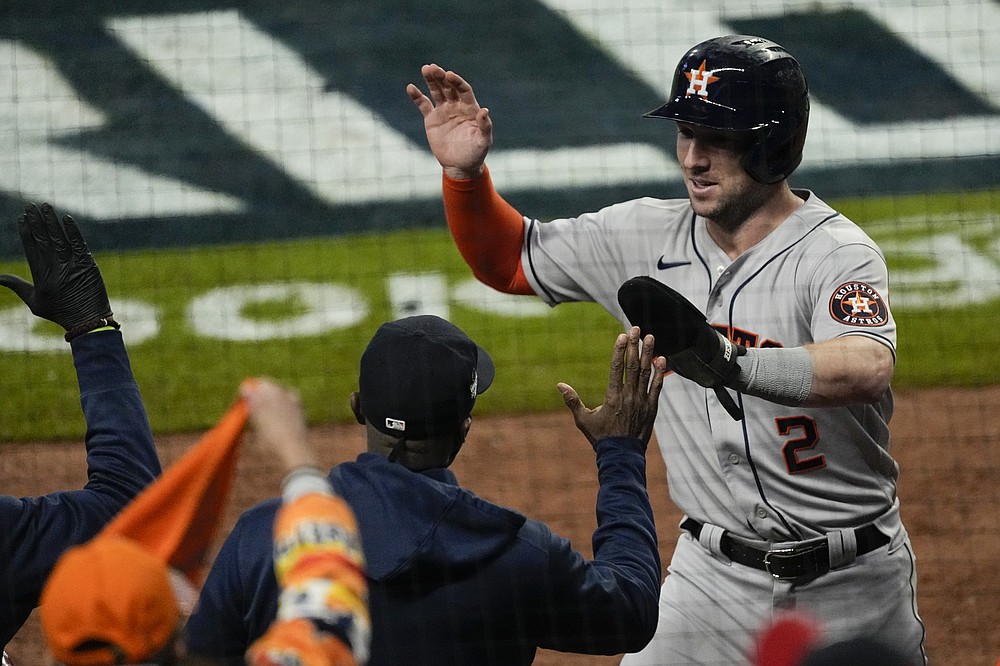 Houston Astros' Alex Bregman celebrates in the dugout after scoring on the double by Marwin Gonzalez during the fifth inning in Game 5 of baseball's World Series between the Houston Astros and the Atlanta Braves Sunday, Oct. 31, 2021, in Atlanta. (AP Photo/Ashley Landis) 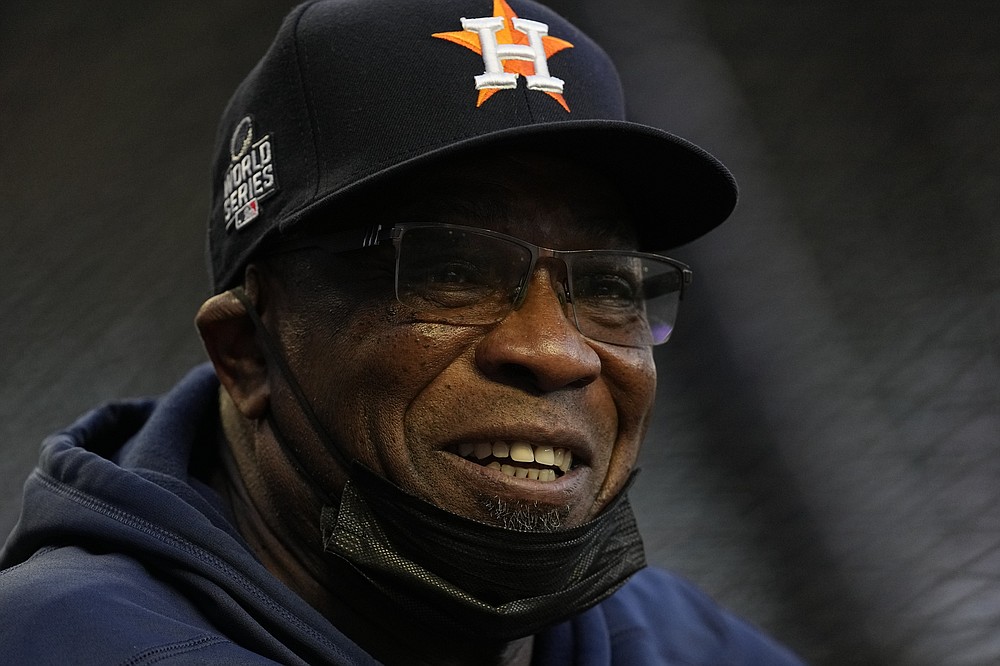 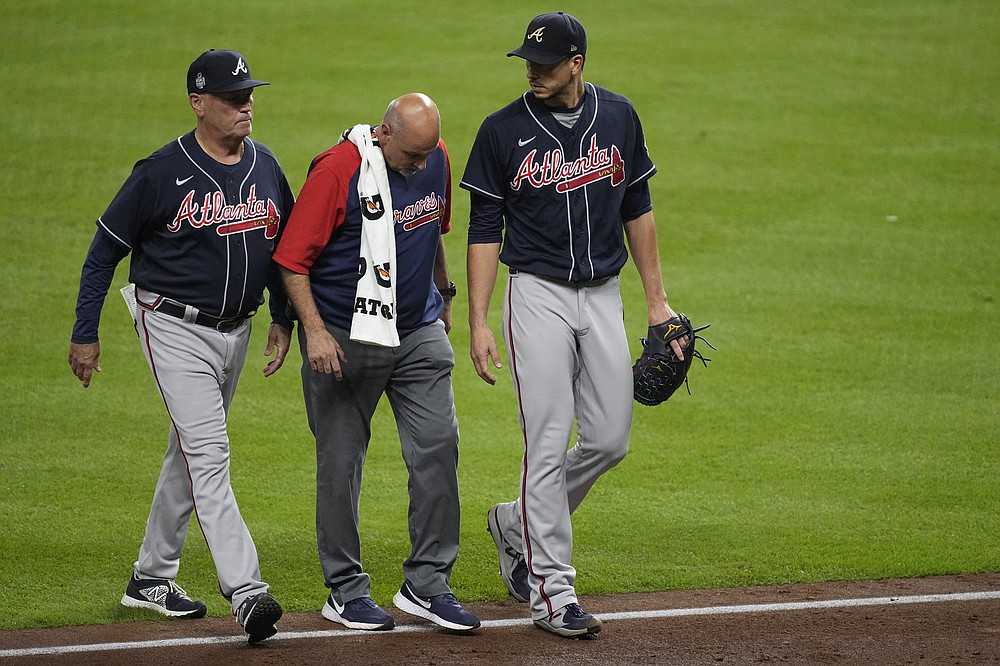