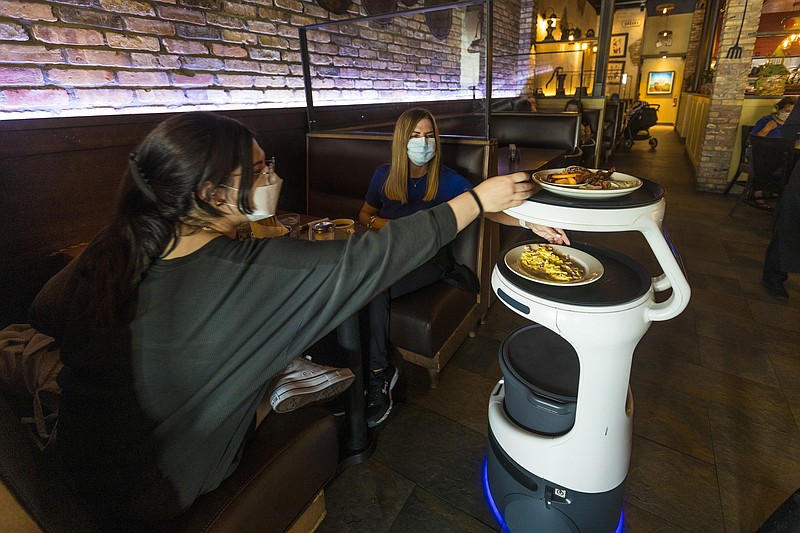 A Servi robot takes customers their food at Sergio’s Restaurant in Miami. Servi uses cameras and laser sensors to carry plates of food from the kitchen to customers’ tables in the dining room. (The New York Times/Saul Martinez)

When Florida gave restaurants the green light to reopen indoor dining earlier this year, restaurateurs like Carlos Gazitua were euphoric. They hoped it would resuscitate their businesses, many of which were on life-support after the shutdown. But they quickly learned it was tough to coax workers back.

"It was a crisis," said Gazitua, owner and CEO of the Sergio's Restaurant chain in Florida. "We couldn't find anyone." Even a major job fair, drawing dozens of restaurant and hotel owners offering more than 1,000 jobs in May, was disastrous.

"We had 40 employers and only four people showed up!" he said. "It was bizarre — all the employers thought we were on 'Candid Camera.'"

So, Gazitua turned to robotics, bringing in the Servi robot in July at one of his restaurants. Servi uses cameras and laser sensors to carry plates of food from the kitchen to tables in the dining room, where the waiter then transfers the plates to the customer's table. The robot costs $999 a month, including installation and support.

Servi saved wait staff and bussers from having to run back and forth to the kitchen and gave overworked servers more time to schmooze with customers and serve more tables, which led to higher tips.

"In the first two hours, the servers were amazed!" he said, adding that Servis have now been added to the company's five other full-service restaurants.

Gazitua is among a growing number of restaurant and hotel owners turning to robotics during this labor shortage. Robots don't call in sick, don't request raises and do jobs, like frying and cleaning, that workers don't like.

Indeed, many robotics companies, like Miso Robotics, Bear Robotics, Peanut Robotics, Knightscope, SoftBank Robotics and Makr Shakr, say they have seen huge increases in inquiries for their robots since the pandemic hit.

Miso is getting 150 inquiries a week for its Flippy robot, said Mike Bell, CEO of Miso. Flippy uses artificial intelligence, sensors, computer vision and robotic arms to fry fast food, like french fries and chicken wings. The robot, which costs about $3,000 per month, including maintenance, identifies the food, senses the oil temperature, and monitors the cooking time.

The CDC estimates 48 million people get sick, 128,000 are hospitalized, and 3,000 die each year from foodborne illnesses. Using robots like Flippy improves a kitchen's cooking accuracy and consistency, reducing human error that could lead to food contamination issues, Bell said.

"This is the toughest labor market we've encountered since World War II," said Jamie Richardson, vice president of marketing at White Castle, founded in 1921. The test went so well that it plans to add Flippy to 10 more locations. Michael J. Hicks, professor of economics and director of the Center for Business and Economic Research at Ball State University in Muncie, Ind., echoed Richardson's view of the job situation.

"The leisure and hospitality industry saw a 50% drop in employment in 2020, a dip of 8.3 million workers," he said. "That is far and away the worst shock to the industry on record, dating back to the Great Depression." 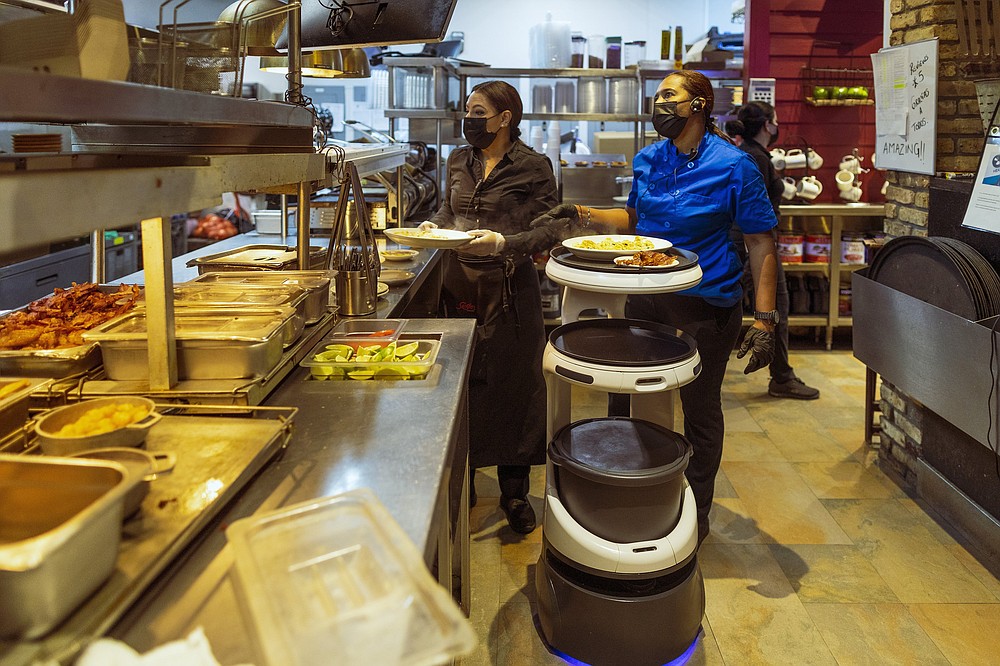 A Servi robot is loaded to take customers their food at Sergio’s Restaurant in Miami. Staffing shortages are causing problems in the restaurant industry nationwide and the problem has owners willing to try robots to fill the gaps. (The New York Times/Saul Martinez)

"Burnout is becoming a very big problem for restaurant staff," he said.

Peanut Robotics, a startup, makes a robot that cleans and sanitizes restrooms, and SoftBank Robotics makes Whiz, which vacuums floors.

Although Peanut is still in the prototype phase, this hasn't stopped hotel chains, offices and restaurants from requesting the robot. "We're not actively marketing, but people keep finding us," said Joe Augenbraun, the company's CEO. "I have demand for hundreds of them right now."

Knightscope makes robots that use artificial intelligence, video and two-way audio to patrol outdoor or indoor areas. It uses thermal imaging, license plate recognition and other software. There is also an alert button on the robot that allows the caller to speak directly to someone. Demand has been particularly high lately from casinos and office buildings, said Stacy Stephens, co-founder and chief client officer at Knightscope.

Makr Shakr, based in Italy, makes robotic bartenders, whose arms can measure, mix, shake, pour and even garnish cocktails. Over the past three months, inquiries have jumped 50% from pre-pandemic levels, said Carlo Ratti, a founding partner and a professor at the Massachusetts Institute of Technology.

The Tipsy Robot, a bar that opened in Las Vegas in 2017, uses Makr Shakr's robotic arms. Its general manager, Victor Reza Valanejad, said the robot was a godsend when covid hit. "I was getting about 120 applications a day in 2019 for bartenders," he said. But in April 2021, the same ad took three weeks to get only 14 applications. "And of those 14, no one showed up for the interviews," he said.

While robots don't call in sick or ask for raises, they can break down. As a result, a restaurant is at the mercy of the robotics company to respond quickly. Sometimes, a software glitch can be fixed remotely, but a hardware problem usually requires an on-site repair. Most of the companies said they could make repairs within 24 hours, but not always.

Robots have had some highly publicized missteps.

In 2019, a Knightscope 5 robot made headlines when a fight broke out in Huntington Park, Calif., where the robot was patrolling. When a woman ran to the robot for assistance and pushed its emergency alert button, the robot repeatedly barked "Get out of the way" and proceeded to roll past her — and the ongoing fight — while playing a little tune. A bystander ended up calling 911.

Stephens blamed the mishap on a robot that had been deployed before its software had been fully installed and its line to 911 had been hooked up. Since then, he said, the city has credited the robot for lowering crime and has extended its contract for two more years.

SoftBank Robotics' Pepper, which is touted as a robot that can read people's emotions, remember faces and interact with people, has probably received the most negative publicity.

A Scottish grocery store, Margiotta, hired the robot to give directions to customers looking for items in the store, but fired Pepper when it kept giving vague answers, like "It's in the alcohol section" when asked where to find beer.

Then there was Pepper's stint at a Japanese nursing home, where it was hired to lead singalongs and hold exercise classes for seniors. But it kept malfunctioning.

Its biggest blemish came when a 2018 Swedish university research report said Pepper's technology had serious security flaws. It said a breach would allow a hacker to spy on people through Pepper's cameras and microphones and even take control of Pepper's arms. SoftBank said the security flaw has since been patched.

"Most Peppers have now been fired," said Dina Marie Zemke, associate professor at Ball State University and author of a 2020 report on robotics. "Either you loved them or you were completely creeped out by them."

SoftBank recently stopped production of Pepper, sold off its majority stake in Boston Dynamics, and laid off about half of its 330-member team in France. But Kass Dawson, SoftBank Robotics' vice president of brand strategy, insists Pepper's production is only temporarily halted and that its robotics division remains a company priority.

Industry experts believe the labor shortages stemming from the pandemic accelerated the acceptance of robots in the workplace.

"We've all gotten more comfortable with dealing with robots — that's one of the legacies of the pandemic," said Craig Le Clair, vice president and principal analyst at Forrester. "We're able to trade off the creepiness of robots with the improved help characteristics."