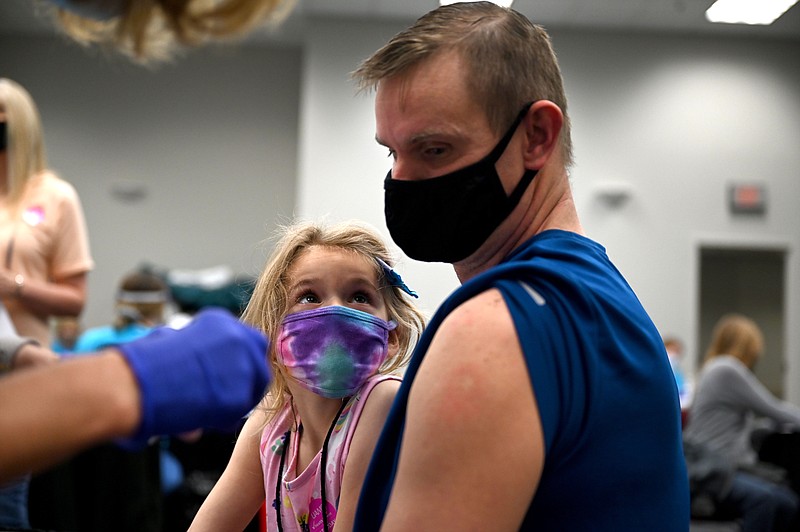 Ava Dorobek, 5, watches as her dad, Kevin, receives a dose of the covid-19 vaccine during a mass vaccine clinic by UAMS at Simmons Bank Arena in North Little Rock on Saturday, April 10, 2021. (Arkansas Democrat-Gazette/Stephen Swofford)

The first vaccine doses for children age 5-11 were administered in Arkansas at some of state Department of Health's local health units on Wednesday.

Although Gov. Asa Hutchinson said Tuesday that "most" of the 92 units had already received an initial supply of the vaccine, a list on the Health Department's website showed only 38 that had it as of late Wednesday morning.

Jennifer Dillaha, the Health Department's chief medical officer, said the first "wave" of shipments of the low-dose Pfizer vaccine continued to arrive in the state on Wednesday.

She said all the units should have received an initial supply by the end of the day.

In a tweet, Hutchinson said he had directed the department "to expedite delivery of doses to local health units and to expand hours of operation."

"The current limited supply should be remedied as we're working with the federal government to get the doses we need for the entire state," Hutchinson said.

The department announced that it will hold vaccine clinics for the newly eligible age group from 8 a.m. to noon on Saturday at at least one of the units in each of the state's 75 counties.

Next week, from Monday through Nov. 8, health units will also be staying open until 6 p.m. to offer the vaccine.

Meanwhile, the state's count of coronavirus cases rose Wednesday by 546, an increase that was smaller by 13 than the one the previous Wednesday.

After falling by six on Tuesday, the number of people hospitalized in the state with covid-19 rose Wednesday by the same number, to 331.

The state's death toll from the virus, as tracked by the Department of Health, rose by 22, to 8,434.