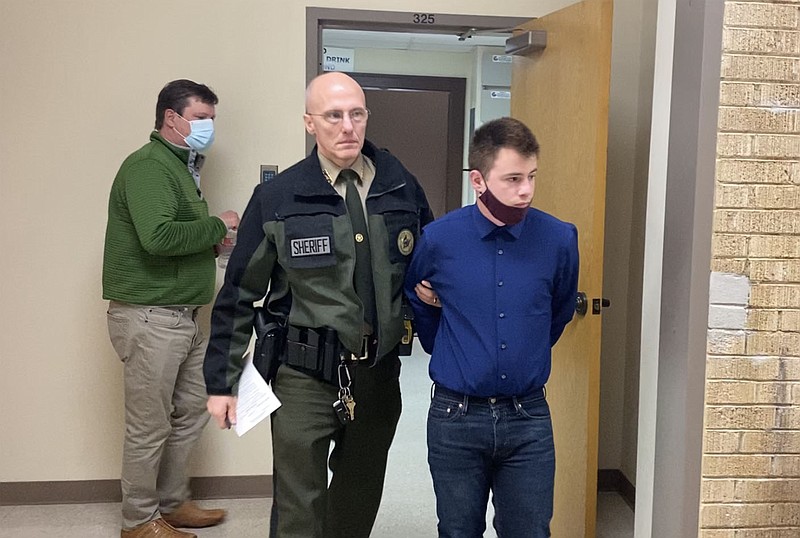 NWA Democrat-Gazette/TRACY NEAL A Benton County sheriff's deputy leads Evan Anderson, 26, of Bella Vista out of the courtroom after he was sentenced to 15 years in prison for soliciting sex from a 13-year-old girl.

BENTONVILLE -- A Bella Vista man was found guilty of soliciting sex from a 13-year-old girl and sentenced to 15 years in prison Wednesday.

Evan Anderson, 26, was found guilty of three counts of sexual indecency with a child. He faced up to six years in prison on each count. The jury also could have recommended Anderson be placed on supervised probation for six years.

The jury deliberated for about 90 minutes before reaching a verdict.

The panel later recommended Anderson serve five years in prison on each of the counts. They also recommended the sentences be served consecutively.

Anderson was arrested in September 2019.

A 15-year-old girl testified that when she was 13 years old, Anderson asked her if she wanted to have sex and for her first time to be with him.

The teen said Anderson asked her again about having sex, and she said no. He never approached her again, she said.

She decided to report Anderson to the police after learning Anderson had a similar interaction with another girl, she said.

A 19-year-old woman testified that when she was 16 years old, Anderson asked her to take off her clothes so he could gratify himself. She recorded the incident with Anderson.

Prosecutors played the recording for the jury.

Anderson wasn't charged with the incident with the woman since she was 16 and the law requires a victim to be 15 or younger.

Anderson testified in his defense. He told jurors he believed the 16-year-old girl was his wife when he was speaking with her. Anderson said he believed he was alone with his wife in the house.

He told jurors he only had sexually explicit communication with his wife and unintentionally with the older girl. Anderson denied he ever solicited sex from the younger girl.

Anderson didn't make any statements before the judge sentenced him. He must serve about 2½ years in prison before he's eligible for parole. He also must register as a sex offender.

The judge ordered him not to have contact with any minors.