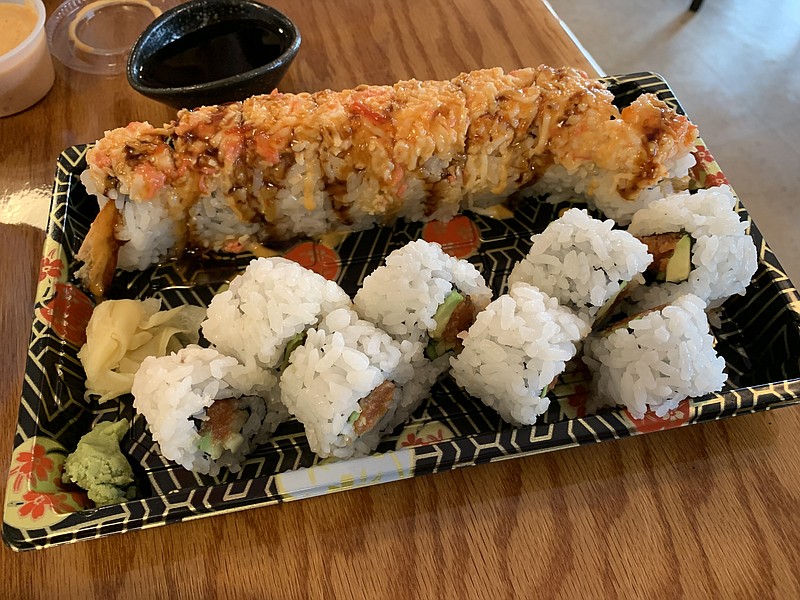 At first glance, the restaurant space at 3700 John F. Kennedy Blvd., at the crest of North Little Rock’s Park Hill, would seem an ideal place for the folks who previously operated a food truck (Fujiyama on the Wheels) to set up a permanent establishment.

Location aside, Fujiyama Sushi & Hibachi Express does have a few positives going for it, including pretty good hibachi dishes and pretty decent sushi.

It’s a pity, perhaps, that it has opened amid a pandemic that makes certain compromises necessary, some of which limited our enjoyment of the meals we had there and from there.

Most people will remember this as the longtime home of Paul’s; it has been any number of places since, including a couple of Central American restaurants (most recently the second incarnation of La Casa Real, and for awhile the first home of Rosalinda’s).

The interior decor has a significant focus on red and white stripes, with polyurethane-coated tables and sturdy brown wooden chairs. Mount Fuji smiles down on diners from a big poster on the back wall.

The supposedly full-service restaurant, however, offers little actual service. Everything comes in to-go containers whether you’re eating in or taking out. Many places have done that to save the extra expense and effort of uber-sanitizing dishes, etc. It surely represents a sizable amount of waste in terms of disposing of foam clamshells and metal sushi trays.

Oh, and for the sake of transparency, this review spans a menu change that has added some items, dropped some others, and added somewhere between $1 and $2 to prices we paid. The prices listed here are off the new menu, the one currently online.

We scanned through the list of nearly a dozen appetizers before settling on the gyoza (four for $3.50), which made up an adequate appetizer portion for two (two per). It came with an unusual dipping sauce — not the usual soy-garlic, this had more of a rice-wine vinegar vibe. Our two vegetable-filled spring rolls ($2.95), part of a takeout order, were a little oily but tasty.

The firm, medium-size, tail-on shrimp in our take-home Hibachi Shrimp entree ($11.95) came a slightly tarter, more vibrant sauce than most places — almost all local — of our experience. We got fairly flavorful fried rice and a veggie medley (broccoli, carrots, onions, zucchini) on the “side.”

We expanded on the shrimp with the Marina Special ($21.95), shrimp, scallops and teriyaki salmon with fried rice and that veggie medley. The seafood was tasty — the salmon was the highlight, as it should have been — but not abundant. Yes, fresh seafood, and we’re assuming it’s fresh, is expensive, but we felt we didn’t really get enough for the price. The veggie medley over-focused on zucchini. 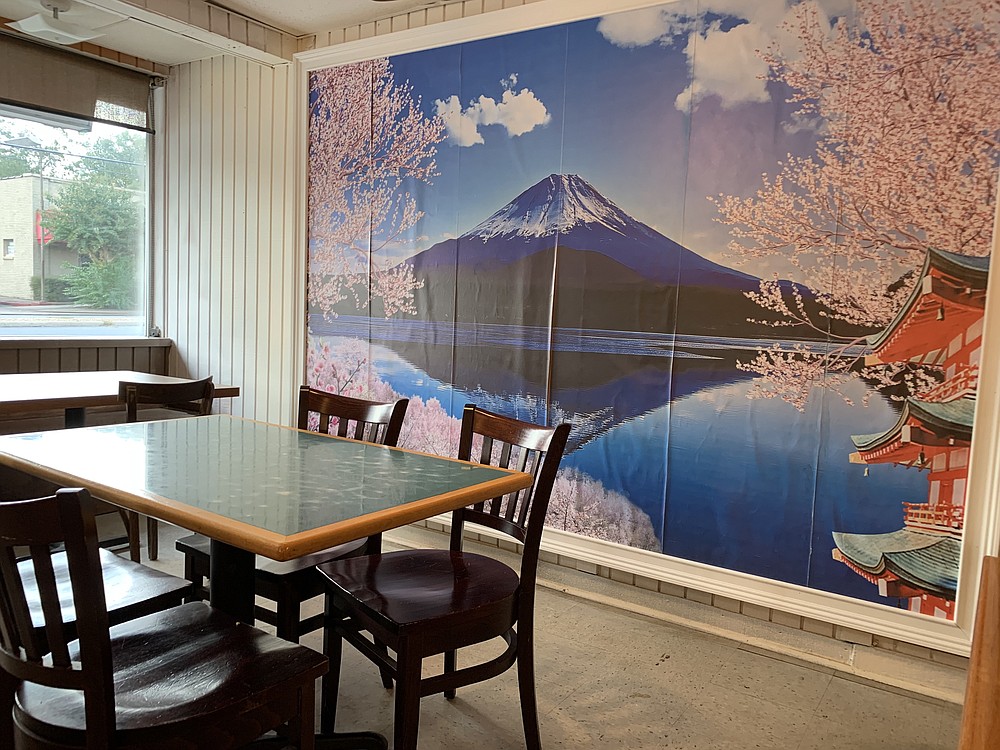 Mount Fuji smiles down on diners from the back wall of Fujiyama Sushi & Hibachi Express. (Arkansas Democrat-Gazette/Eric E. Harrison)

The steak in our Hibachi Steak & Chicken combo ($14.95) was ordered medium rare. It came out considerably rarer than that; some pieces may in fact have been undercooked. It was difficult to cut, for example, and the portion Intrepid Companion took home also included what she says was a questionable piece of chicken.

We also can recommend the “special” Snow Beauty Roll ($12.95), rice ringing “crab,” cream cheese and avocado, with “white tuna” on top. “White tuna” is usually escolar, not tuna, but in this case, it appears to be actual seared and lightly spiced albacore, with a slight touch of tobiko, that orange sushi roe.

Reservations: Not that we observed