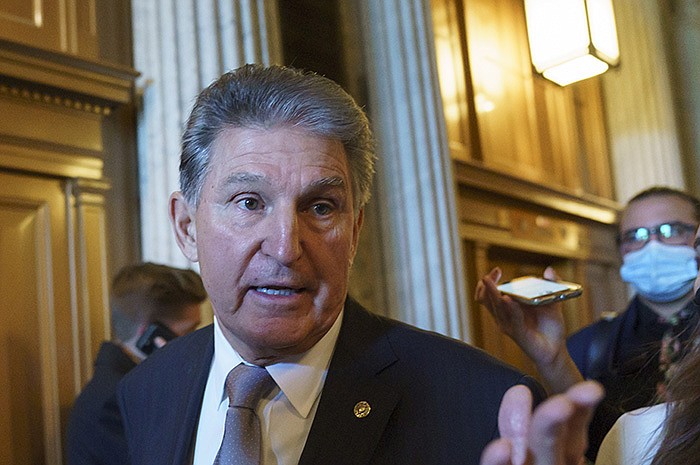 Sen. Joe Manchin said Wednesday that Tuesday’s elections reaffirmed his fears about his party’s ambitions to spend trillions of dollars, adding that Americans “spoke loud and clear at the voting [booth], so I hope everybody listens.” (AP/J. Scott Applewhite)

The House Rules Committee convened late Wednesday afternoon to consider the updated text of the now-sprawling 2,135-page package -- a crucial step ahead of initial House votes that are possible as soon as today.

The flurry of last-minute additions -- on top of a plan to include lower Medicare prescription drug prices -- comes as Democrats are desperate to deliver on Biden's signature domestic proposals after the election losses.

Many voters in Virginia said drawn-out negotiations in Washington over Biden's governing agenda were an important factor in their vote, so blame was flowing to Capitol Hill as Democrats have spent months arguing over details of the package.

"We've got to produce," Democratic Sen. Tim Kaine of Virginia told reporters at the Capitol. "We've got to get results for people."

From the White House, Biden agreed: "What I do know is I do know that people want us to get things done."

[Video not showing up above? Click here to watch » arkansasonline.com/114bill/]

Holdout vote Sen. Joe Manchin of West Virginia took a different meaning from the upset in Virginia. He said the loss reaffirmed his long-known fiscal fears about his own party's vast ambitions to spend trillions of dollars to advance its agenda.

"They were concerned about inflation, high costs, making it more difficult for them," Manchin said of voters. "And I think they spoke loud and clear at the voting [booth], so I hope everybody listens."

Democrats have been working fervently to shelve their differences, particularly with Manchin and fellow resister Kyrsten Sinema of Arizona, and launch votes on Biden's big bill and a related $1 trillion bipartisan infrastructure package that has stalled.

The family leave provision that Manchin had resisted earlier is expected to include four weeks of paid time off for childbirth, recovery from major illness or caring for family members, less than the 12-week program once envisioned, but all fully paid for with revenue elsewhere.

Biden had reluctantly dropped a scaled-back paid leave proposal from last week's White House framework after Manchin balked at the cost. But Democrats who lobbied that paid leave has been a party priority for decades continued to push it.

The proposal that House leaders are offering would include paid family and medical leave based on need, an apparent attempt to get support from Manchin and other fiscal conservatives concerned about the program's price tag.

The leave proposal would be a permanent program, starting in 2024. Its price tag is around $200 billion, the person said.

"The Ways and Means Committee crafted a policy that will finally give workers and their families the peace of mind of knowing that when disaster strikes, they can rely on paid leave to avoid total crisis," Ways and Means Chairman Richard Neal said in a statement. "We do this responsibly, fully paying for the means-tested program."

House Speaker Nancy Pelosi told House Democrats that she will send to the Rules Committee for a hearing Wednesday an updated version of Biden's agenda to allow the House to put the measure on the floor. But Pelosi stopped short in a message to Democrats saying when that would happen. The message also says that a senator has informed her of opposition to a few of the items contained in the bill.

"It had been my intention throughout this process to put on the House floor and pass a bill that would pass the Senate in the same form," Pelosi said.

She said the House is seeking to have an analysis done by the Congressional Budget Office, which some moderates have said is a condition for their support.

Manchin and House moderates have demanded more analysis of the bill's deficit impact before voting on the measure, which includes new spending on climate and social programs. Even if the House acts this week, it likely will be weeks until the Senate is ready for a vote.

"We ought to be very careful of the timeline," Manchin said. "Don't even set a timeline until we thoroughly, thoroughly vet this bill."

On another remaining issue, the Democrats compromised on a plan to partly do away with the $10,000 limit on state and local tax deductions that particularly hits New York, California and other high-tax states, and was enacted as part of the Trump-era 2017 tax plan.

While repeal of the so-called SALT deduction cap is a priority for several northeastern state lawmakers, progressives wanted to prevent the super-wealthy from benefiting. Under the plan, the $10,000 deduction cap would be lifted to $72,500 for 10 years, starting with the 2021 tax year.

And the just-added immigration provision would create a new program for some 7 million immigrants who are in the country without legal standing, allowing them to apply for permits to work and travel in the U.S. for five years. It would also allow the government to tap unused visas to admit people into the United States.

Resolving the immigration issue was among the last daunting challenges to finishing up the draft of Biden's package. Biden had set aside $100 billion to fund the immigration changes, which could raise the overall package from $1.75 trillion to $1.85 trillion if the provision is accepted by the Senate. Lawmakers plan to make their case to the Senate parliamentarian in coming days, hopeful that the changes will pass muster under Senate rules because they build on existing programs, those involved said.

"We have to have something for our immigrants," said Rep. Judy Chu, D-Calif.

Both the paid family leave and the immigration law changes have drawn resistance from Manchin, whose support remains crucial in the 50-50 Senate, where Biden has no votes to spare. The overall bill faces united opposition from Republicans.

Pelosi in a letter to colleagues Wednesday acknowledged opposition to the House's approach from a single senator, a reference to Manchin. But Pelosi's strategy now seems intent on passing the most robust bill possible in her chamber and then leaving the Senate to adjust or strip out the portions they won't agree to.

"We must strive to find common ground in the legislation," Pelosi said in a letter to colleagues.

Biden's $1.75 trillion package would provide large numbers of Americans with assistance to pay for health care, education, raising children and caring for elderly people in their homes. It also would provide some $555 billion in tax breaks encouraging cleaner energy and electric vehicles, the nation's largest commitment to tackling climate change.

Much of its costs would be covered with higher taxes on people earning over $10 million annually and large corporations, which would face a 15% minimum tax in efforts to stop big business from claiming so many deductions that they end up paying zero in taxes.

Rep. Colin Allred, D-Texas., said the party's internal debates have been harmful not only for public opinion but "also harmful in terms of showing that our democracy is working." He said Wednesday, "We have to show that we can govern."

Still, the final details of Biden's big proposal are coming into shape.

Along with Wednesday's additions of the paid family leave, immigration and local tax deduction programs, Democrats on Tuesday reached a deal to lower prescription drug costs for most older people, capping out-of-pocket Medicare Part D costs at $2,000 and reducing the price of insulin.

For the first time, Medicare will be able to negotiate prescription drug prices in its Part B and Part D programs. The new monthly cap on the price of insulin would lower the price to no more than $35 a dose, and there would be a so-called inflation rebate if annual prices rise too high, Democrats said.

Also Wednesday, Republican lawmakers were quick to point to Tuesday's election losses as consequences of Democrat policies and a bad sign for the spending bill.

"Joe Biden and Nancy Pelosi did not get the message from what happened last night," Rep. Steve Scalise, R-La., the No. 2 Republican, said. "Now maybe more of their members will look in the mirror and say, 'I don't want to be the next Terry McAuliffe.'"

Some also honed their lines of attack off the successful campaign of Glenn Youngkin, the private equity executive and political neophyte who captured the governorship of Virginia by focusing heavily on education and the grievances of parents unhappy with how school districts have responded to the pandemic.

Rep. Elise Stefanik, R-N.Y., who is in charge of House Republican messaging, convened a round-table discussion on education Wednesday to take Youngkin's message national. Republicans made clear that they would go after two of the biggest and most popular provisions in the social policy bill -- universal prekindergarten and generous child care support -- by saying they were schemes to nationalize early childhood education and force-feed left-wing pedagogy to youngsters.

Stefanik said children had been "forced to remain masked and distanced from their peers" and exposed to "inappropriate material" on race and gender.

"Virginians spoke loud and clear last night that parental rights is an issue we can run on and win on," she said. "Glenn Youngkin ran on education, and he won on education."

Democrats, though, appeared confident that they could counter that attack by emphasizing the benefits of the programs created by their legislation, against which Republicans are united in opposition.

"Oh, I welcome that fight," said Sen. Bob Casey, D-Pa. "They're saying that we shouldn't help families pay for child care and have more 3- and 4-year-olds go to pre-K? Please say that, Republicans. Please say that."

Information for this article was contributed by Lisa Mascaro, Mary Clare Jalonick, Farnoush Amiri, Kevin Freking and Alan Fram of The Associated Press; by Jeff Stein, Tony Romm, Mike DeBonis and Marianna Sotomayor of the Washington Post; and by Jonathan Weisman and Emily Cochrane of The New York Times. 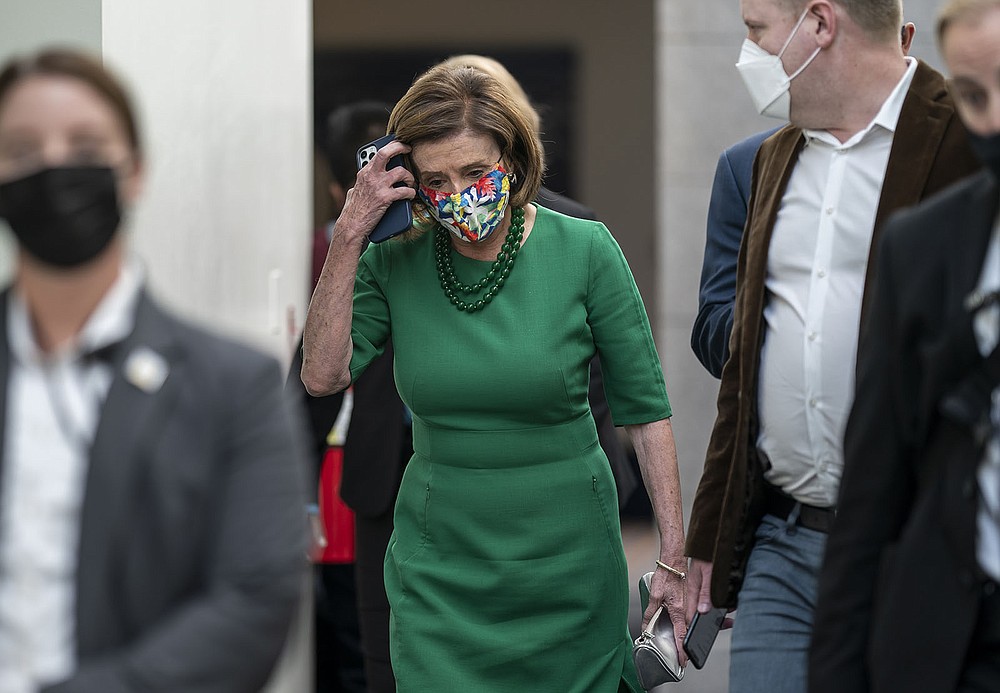