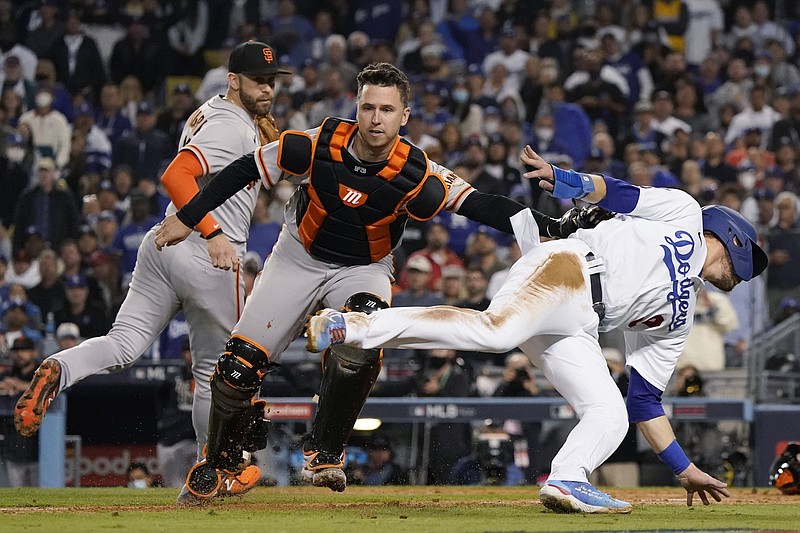 Los Angeles Dodgers' Gavin Lux, right, is tagged out by San Francisco Giants catcher Buster Posey as he tried to score on a grounder by Chris Taylor, who was safe during the fifth inning of Game 4 of a baseball National League Division Series, Tuesday, Oct. 12, 2021, in Los Angeles. (AP Photo/Marcio Jose Sanchez)

San Francisco Giants catcher Buster Posey plans to announce his retirement today, according to a person with direct knowledge of the decision. The person spoke on condition of anonymity Wednesday because Posey had yet to make his decision public. The Giants said last month that they would exercise Posey's $22 million club option for the 2022 season as long as the veteran catcher wanted to keep playing after a stellar year. He batted .304 with 18 home runs and 56 RBI, showing his surgically repaired right hip had finally regained full strength three years post-op. Posey, 34, opted out of the coronavirus-shortened 2020 campaign to care for prematurely born adopted twin girls.

The Philadelphia Phillies declined club options for next season on outfielders Odubel Herrera and Andrew McCutchen on Wednesday. Herrera gets a $2.5 million buyout rather than a $11.5 million salary, completing a $30.5 million, five-year contract. He is eligible for salary arbitration. McCutchen, signed as a free agent to a $50 million, three-year contract in December 2018, gets a $3 million buyout instead of a $15 million salary. He hit .237 with 47 homers and 143 RBI in three seasons in Philadelphia. He will become a free agent. Herrera hit .274 in six seasons with the Phillies. Herrera, who made the All-Star team in 2016, was suspended for the remainder of the 2019 season following a domestic assault incident with his girlfriend in May.

Tom Matte, who spent his entire 12-year NFL career as a gritty running back for the Baltimore Colts -- except for a star turn for three games in 1965 as their quarterback -- has died. He was 82. The Baltimore Ravens confirmed Matte's death during Coach John Harbaugh's news conference Wednesday. No details were provided. After scoring three touchdowns to carry Baltimore past Cleveland in the 1968 NFL Championship Game, Matte became the first player to top the 100-yard rushing mark in a Super Bowl, totaling 116 yards in a upset loss to Joe Namath and the New York Jets. He earned a championship ring with the 1970 Colts despite being sidelined with an injury for most of the season. Although he rushed for 4,646 yards, caught 249 passes for 2,869 yards and scored 57 touchdowns, Matte spent most of his time with the Colts operating in the shadow of future Hall of Famers Johnny Unitas, Lenny Moore, Raymond Berry and John Mackey. "I was sort of the jack of all trades and master of none," Matte said. "I wasn't the superstar by no means." Matte was drafted seventh overall by Baltimore in 1961.

WR Thomas out for season

The New Orleans Saints won't get record-setting wide receiver Michael Thomas back at all this season, another blow to an offense that just lost starting quarterback Jameis Winston to a major knee injury. Complications related to ankle surgery last summer will keep Thomas out for the year, the receiver said Wednesday in a lengthy social media post. Saints Coach Sean Payton said Thomas will need an additional procedure. Two seasons ago, Thomas set an NFL single-season record with 149 catches. He finished that season with 1,725 yards and 9 touchdowns receiving.

For the first time, all 14 Breeders' Cup races this weekend at Del Mar will be run without race-day medication, the final step in a process that had the antibleeding medication Lasix prohibited in races for 2-year-olds at last year's world championships. Breeders' Cup CEO Drew Fleming said he believes the prohibition led to a record 46 foreign-based horses competing on Friday and Saturday, including seven from Japan. "We don't medicate our horses over here at all," O'Brien said, "and the only medication they get is any kind of antibiotics for cold or flu or infections." Trainer Aidan O'Brien, second all-time in Breeders' Cup purse earnings among trainers, has said he previously used Lasix on his horses in the Breeders' Cup to be on an even playing field. Formally known as furosemide, Lasix is a diuretic that is widely used in the U.S. to prevent or curtail exercise-induced pulmonary hemorrhaging. Most of the rest of the world's major racing jurisdictions prohibit it on race days. "It's a legal medication, it's a therapeutic medication, and I'm not sure the general public understands that," said Hall of Fame jockey Jerry Bailey, who is an analyst on NBC's coverage of the Breeders' Cup. "Less medication to the general public I think would be positive." This year's Triple Crown races were run without Lasix, as well as most of the graded stakes at such major tracks as Churchill Downs, Belmont and Saratoga in New York, Santa Anita and Del Mar in California and Keeneland in Kentucky. That includes races in the Breeders' Cup Challenge series, which guarantees winners a spot in the two-day world championships.

Detroit GP back to downtown

The Detroit City Council approved a contract Wednesday to return the Detroit Grand Prix downtown from its current home on an island in the middle of the Detroit River. Detroit Belle Isle Grand Prix Inc. told council members in September that it wanted to hold the IndyCar race from 2023 through 2025 on a 1.7-mile track along city streets instead of on Belle Isle. Next year's race still will be held in June on the popular island park, east of downtown. Race representatives spent the past five weeks in meetings and listening sessions with Detroit residents, business leaders, community groups and elected leaders on returning the race downtown, the Detroit Grand Prix said in a statement. "The positive reaction and the excitement that we have seen from the community about the Grand Prix coming back downtown reinforces our belief that this relocation will provide a significant benefit to the city, its residents and our local businesses for the future," the statement read. Open-wheel cars first ran in Detroit in 1982, when Formula One raced on the streets of downtown before the event moved to Phoenix in 1988. The now-defunct CART series ran at Belle Isle from 1992 to 2001. The IndyCar Series started racing at Belle Isle in 2007.

Defending champion Daniil Medvedev stayed in contention for the year-end No. 1 ranking by defeating Ilya Ivashka of Belarus 7-5, 6-4 Wednesday in the second round of the Paris Masters. The second-seeded Russian squandered three set points at 5-1 in the first set and then allowed Ivashka to rally for 5-5. However, Ivashka then dropped serve with a double-fault and three unforced errors and Medvedev clinched the set with a backhand volley. The U.S. Open champion broke for a 2-1 lead in the second but then hit double-faults on his first two match points before converting the third when Ivashka sent a forehand wide. Novak Djokovic, who is also playing in Paris, has a lead of 800 points over Medvedev in the rankings and could clinch the year-end No. 1 this week depending on their respective results. Earlier, an injured Stefanos Tsitsipas retired from his second-round match while trailing 4-2 against Australian opponent Alexei Popyrin. The third-seeded Greek leads the ATP Tour with 55 wins this year and was playing his 73rd singles match. However, his form has declined since he reached the French Open final, losing in the third round of the U.S. Open in September and in the second round in Vienna last week. Tsitipas has qualified for the season-ending ATP Finals, an eight-man tournament that starts on Nov. 14. He declined to say what was bothering him on Wednesday but he clutched his right arm several times during the match. 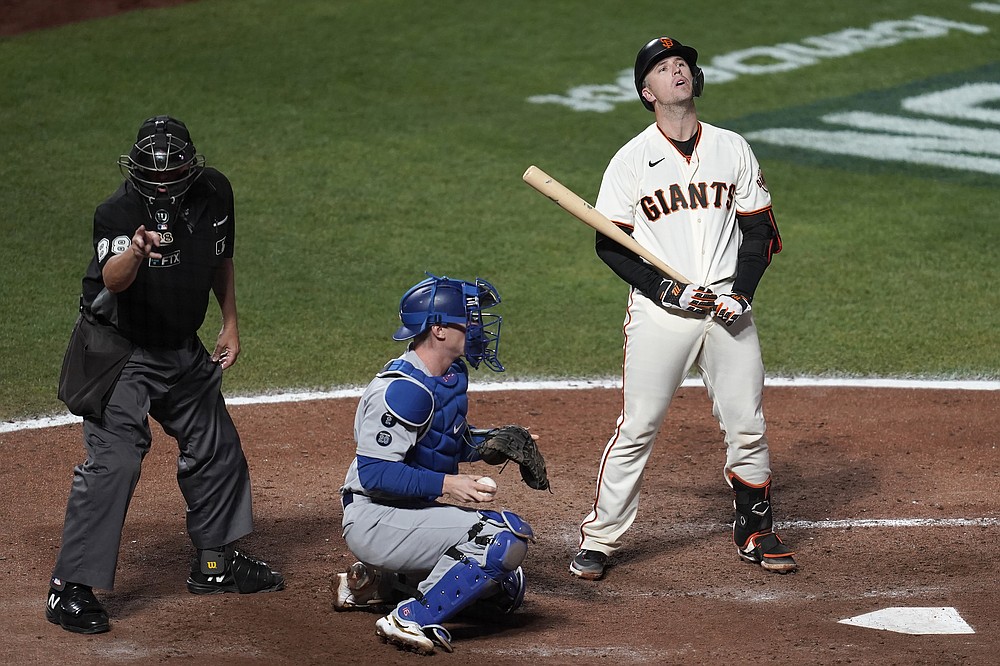 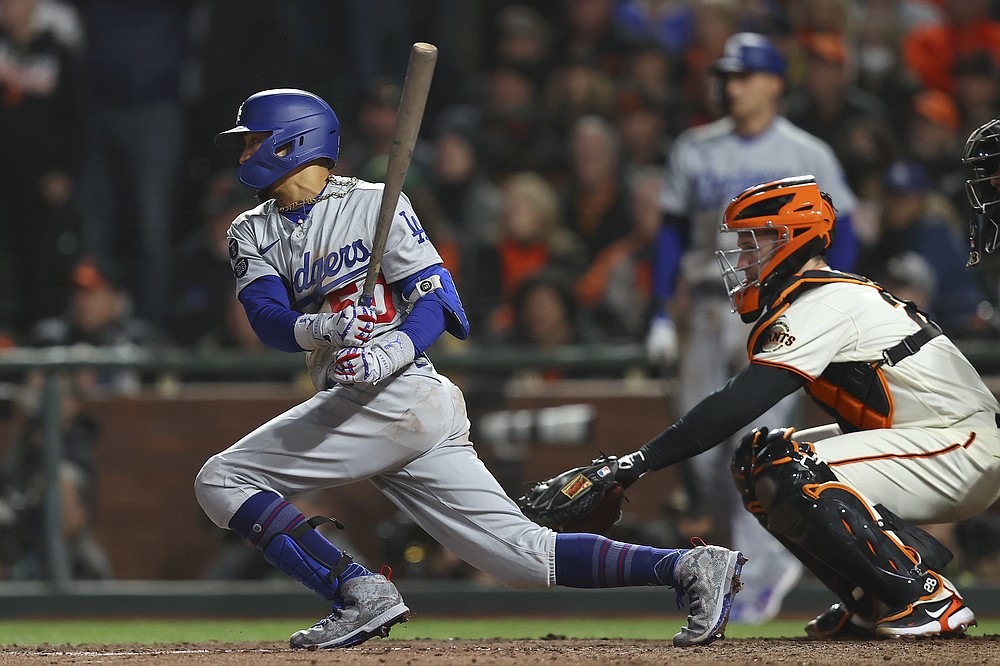 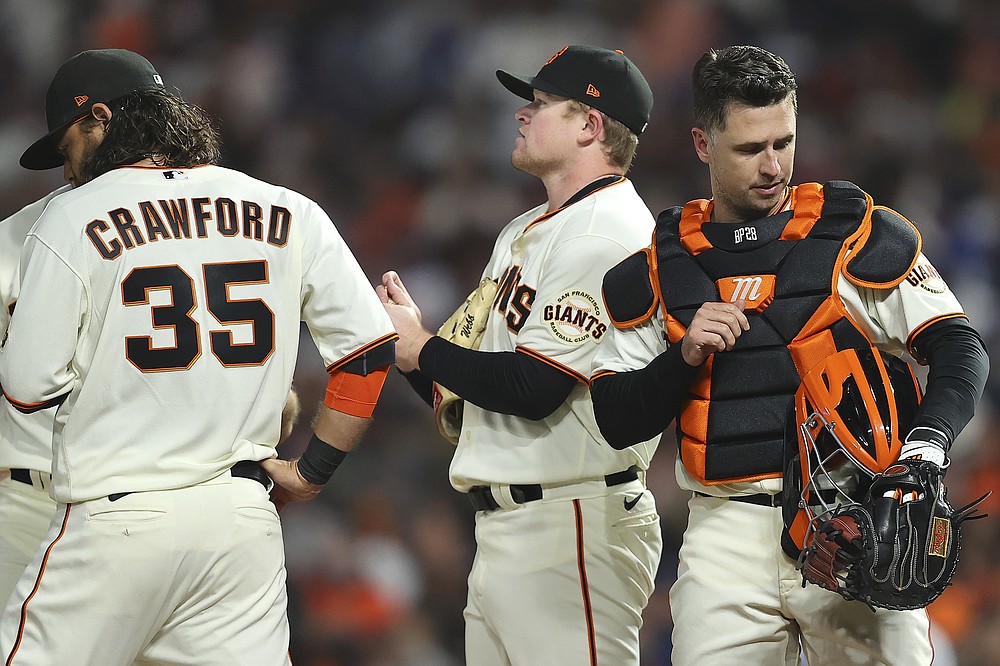