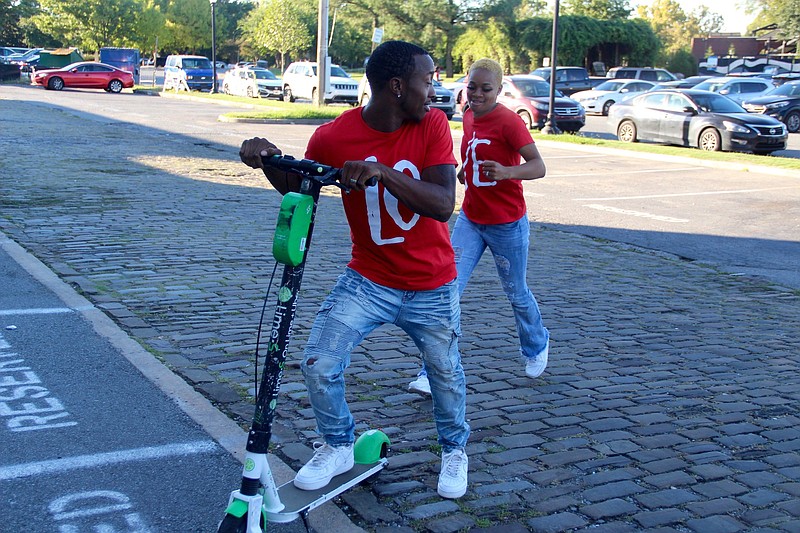 Derrio Ice and Leslie Alexander get ready to explore downtown Little Rock recently on one of the electric motorized scooters that are available to rent. (Pine Bluff Commercial/Eplunus Colvin)

Pine Bluff may be joining Bentonville, Fayetteville and Little Rock in the electric motorized scooter craze that became widely popular on the West Coast and has grown in popularity worldwide.

Skood-addle, from the parent company Bird, presented a proposal to the Traffic & Aviation Committee via Zoom on Tuesday with an opportunity for these battery-powered scooters to make their mark in various locations in Pine Bluff including downtown, the University of Arkansas at Pine Bluff, Southeast Arkansas College and Pine Bluff Regional Park.

Breonna Bishop of Skood-addle said the use of these scooters provides sustainability by lowering carbon emissions; cuts down on commuter time; and allows employees, students and visitors to get around campus.

She added that it would free up shuttles for other uses, cut down on unauthorized parking and be a morale booster for the city.

Bishop said the city could start out with 100 scooters and add more as needed.

Also known as shared micromobility, the use of these scooters would provide people with more options for short trips.

According to The National Association of City Transportation Officials (NACTO), the typical scooter user or bike-share annual/monthly pass-holder rides for 11-12 minutes and 1-1.5 miles.

Arkansas passed the Electric Motorized Scooter Act in July 2019, legalizing and regulating electric scooters. This law states that the scooters themselves must weigh less than 100 pounds and have a top speed of 20 mph or less, but riders are not permitted to ride faster than 15 mph.

In March, Little Rock added a second shared-scooter company Bird, a mobility-technology company based in Santa Monica, Calif., in the River Market district in downtown Little Rock. Bird is now looking to make its mark in Pine Bluff.

Founded in 2017, Bird operates shared electric scooters in more than 100 cities in Europe, the Middle East, and North America with 10 million rides in its first year of operation.

Bishop said Bird would partner with the city of Pine Bluff, pay for any permits needed to operate in the city, and would handle all maintenance and repairs.

Riders would pay to unlock the scooters through a mobile app and the city would receive a share of the revenue.

Though no dollar amounts were discussed in the meeting, in March the Arkansas Democrat-Gazette reported both Bird and Lime paid tens of thousands of dollars to offer their scooters in the Little Rock market.

In February, Lime paid the $10,000 franchise fee and an additional fee of $38,200. A separate payment of $200 was made in October 2020, according to a receipt provided by Stephanie Jackson, a spokeswoman for the mayor (Scott) of Little Rock.

According to the representatives, Scood-addle scooters would be offered at $1 a minute to riders.

Each scooter provided by Skood-addle will have GPS locator and geofencing capabilities to keep the scooters out of unwanted areas.

For Little Rock, safety was a concern and a scooter ordinance was drafted and approved in January addressing geographic restrictions for scooters based upon zoning and a requirement for scooter companies to furnish or approve helmets for riders younger than 18, according to the Arkansas Democrat-Gazette.

The ordinance also restricts riders to the street and says they must travel in a bicycle lane where one is available.

The ordinance does allow riders to travel on the sidewalk in certain areas approved by city officials where sidewalk-riding has been indicated with signs.

According to the El Dorado News-Times, Bird proposed a Memorandum of Understanding to the City of El Dorado last month but city council members had safety concerns.

Even though the law mandates riders/renters be at least 16 years old, council member Judy Ward said she learned riders as young as 12 were renting the scooters calling them "fearless and darting into the street."

The National Association of City Transportation Officials (NACTO) says there were 18 shared scooter fatalities in the U.S. in 2019 but also pointed out the potential to reduce car trips, traffic, parking needs and carbon emissions with the use of electric scooters.

Bird said on their website that The Bird app encourages--and incentivizes--responsible riding rewarding to riders who park in designated areas, away from public pathways.

They also provide Community Mode in the Bird app making it easy for anyone to submit complaints directly to their team.

Bird Access also offers five free rides a day, according to their website, to low-income residents for $5 a month with a disclaimer that prices may vary by city and program.

Several council members were in favor of the scooters and chairwoman Joni Alexander said the perfect parking spot for them would be in an area already developed downtown by Downtown Development.

Alexander said she wants to set up a second meeting to involve Downtown Development, Public Works and representatives from UAPB and SEARK.