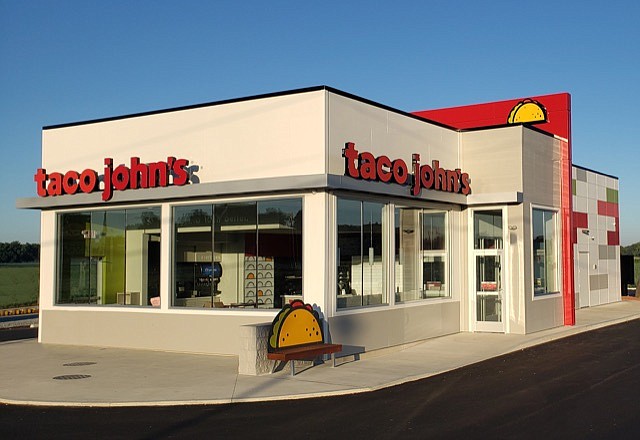 Taco John's put together a new look for its restaurants, including this one in Peru, Ind., about two years ago. The Wyoming-based chain is looking to expand into Little Rock next year. (Special to the Democrat-Gazette)

Saturday was the last day of operation for the last two Pancho's restaurants, at 717 N. White Station Road in East Memphis and the original, at 3600 E. Broadway in West Memphis, which opened in 1956. The owners will focus on the Pancho's cheese dip and salsa, which is sold in more than 1,200 stores.

The Pancho's website, panchosdip.com, recounts the restaurant's origins: "When Louis Jack Berger graduated from high school, his father, Morris, surprised him with a trip to Mexico. Not only did they enjoy the trip, they discovered flavors, colors and taste sensations that inspired them to open the very first Pancho's in 1956 in West Memphis, Arkansas."

Nine months after it opened, an 18-wheeler destroyed the original building, which had packed dirt floors and a live tree, salvaged during construction, as its centerpiece, but the family tore down a nightclub it owned on the current site, called the Plantation Inn, and built the restaurant anew.

Cheyenne, Wyo.-based Mexican fast-food restaurant chain Taco John's is looking to expand into the Little Rock market, says Brooks Speirs, the company's vice president for development. Speirs explains that in the midst of a massive expansion into surrounding states — Tennessee, Missouri, Oklahoma and Texas — Arkansas was starting to stand out as a necessary next step. (There's one current restaurant in the state, at 1819 E. Main St., Russellville.) The company is in the process of sounding out franchisees in Little Rock and also in Fayetteville, with the hope of opening outlets by the end of 2022; once those are established, they'll start looking at smaller markets, with a goal of 12-15 Arkansas outlets within the next five years. They're not yet to the point of scouting locations, Speirs says, but he anticipates a Little Rock restaurant will supply 50-plus jobs, millions of dollars of investment and creating or occupying up to 50,000 square feet of commercial real estate. The phone number of the Russellville restaurant, by the way, is (479) 280-1932. Check out the company and its menu at tacojohns.com. 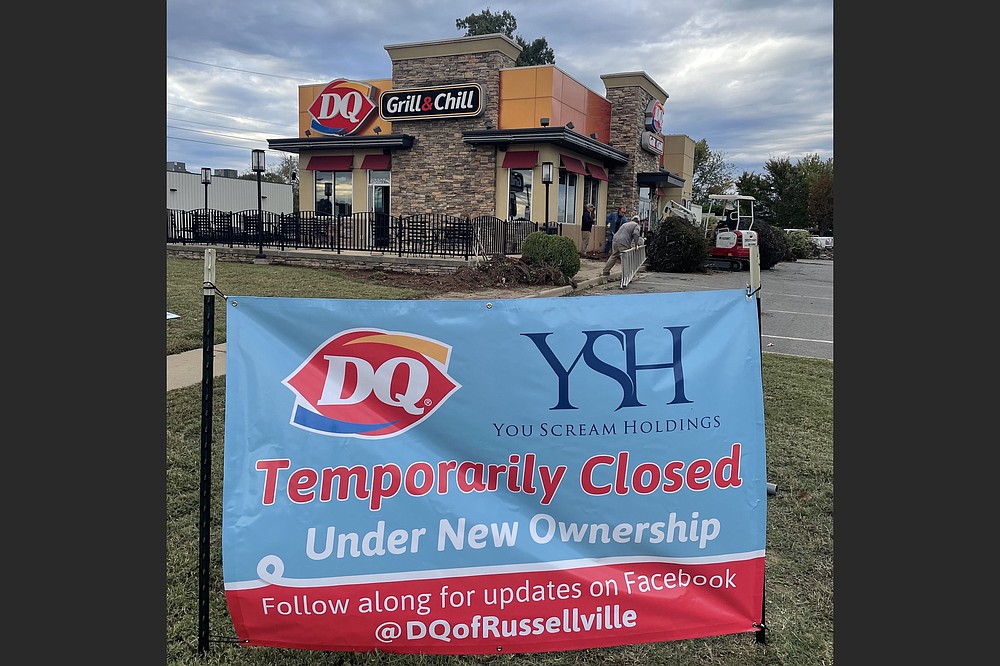 You Scream Holdings LLC has acquired the DQ Grill & Chill in Russellville. (Special to the Democrat-Gazette)

And speaking of Russellville, You Scream Holdings, LLC has acquired the Dairy Queen (aka DQ Grill & Chill), Taco John's neighbor, at 2007 E. Main. You Scream is the franchisee that controls a bunch of Arkansas DQ outlets — this makes No. 12. The store is temporarily closed while the transition transpires; those interested in applying to work there can apply on site. An eventual re-grand opening will involve the usual promotion of the first 100 customers to buy a cake receiving free Blizzards for a year.

The city of Little Rock confirms, via a new building permit, that Regas Contracting of Stafford, Texas, is building a "ground-up construction of of a drive-thru-only Chick-fil-A restaurant with stand-alone canopies" at 701 Broadway. The $2,241,622 project totals 2,515 square feet.

And speaking of Benton, food trucks Twisted Fries, Riverside Grocery and The Croissanterie will be open for Food Truck Friday, 5-7 p.m., at the Benton Event Center, 17322 Interstate 30, Benton. It's part of the Benton Chamber of Commerce's Glitz and Garland event, which also features local vendors.

The folks who run Eat My Catfish posted Oct. 22 on Facebook (facebook.com/EatMyCatfishAR) promising "BIG NEWS" (in all capital letters), that "We will be announcing a NEW LOCATION that is set to open before the end of the year!!! Can anyone guess where????" An Oct. 28 post also touted forthcoming "BIG NEWS" (in all caps) with a pledge that "We will fill you in on the details soon." Meanwhile, the mini-chain (with outlets in Little Rock, North Little Rock, Benton, Conway, Fayetteville, Siloam Springs and Rogers) is offering "secret employee menu" items through Nov. 28: Cajun Corn Dogs, Smoke Sausage Gumbo, Buffalo Chicken Fries and Fried Jalapenos. Hours in all stores are 11 a.m.-8 p.m. Monday-Thursday, 11 a.m.-9 p.m. Friday-Saturday, 11 a.m.-2 p.m. Sunday. The website is eatmycatfish.com.

We've gotten relatively few notices of chain restaurants marking Veterans Day, Nov. 11, with special deals; here are the ones we have so far:

◼️ Wayback Burgers is donating 10% of all online sales that day to the Tunnel to Towers Foundation, which, according to a news release, "honors the sacrifice of firefighter Stephen Siller, who laid down his life to save others on Sept. 11, 2001."

◼️ On the Border is offering veterans a Free Pick 2 Combo.

◼️ And Bonefish Grill says it's offering a Heroes Discount of 10% off "for all service members, veterans and first responders' checks all day, every day with show of valid ID."

Food delivery service Bite Squad is looking to hire 200 new contract drivers in the Little Rock area. Chris Barnes, head of driver operations, says flexible schedules are available and drivers, once activated as independent contractors, can start immediately. You must be 18 years or older and have a valid driver's license, proof of auto insurance and a smartphone. Apply at bitesquad.com.

Dallas-based Raising Cane's Chicken Fingers is raising the pay of hourly workers in its eight Arkansas restaurants to a minimum of $12 per hour, on average a $1 an hour increase. Hit to the company's bottom line, which a news release is calling an "investment": $500,000.

And you will recall last week we outlined some of the reasons restaurants have had to raise their prices over the last several months. The National Restaurant Association, in a letter to President Joe Biden highlighting how supply chain challenges and inflation are weighing down restaurant industry rebuilding, provides some specifics:

◼️ Wholesale food prices increased sharply in September, posting the highest 12-month increase since 1980. Restaurant commodity prices are soaring — beef is up nearly 60%, fats and oils up 50% and eggs up nearly 40%.