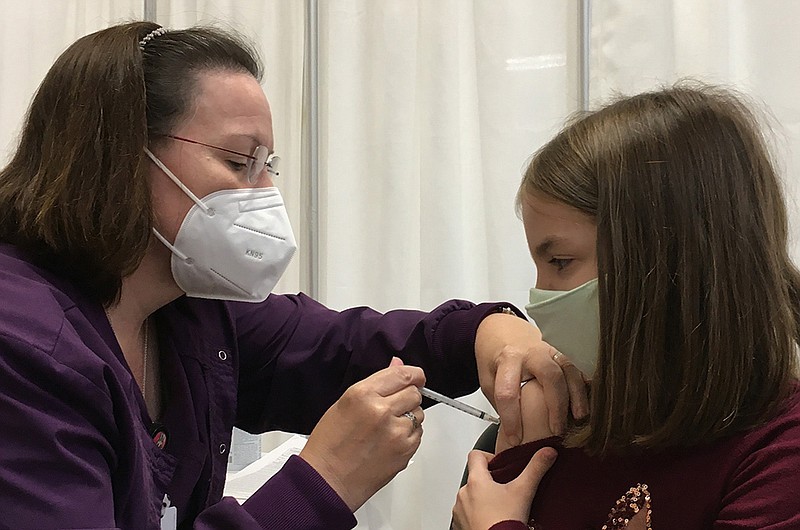 Vaccinations for children ages 5-11 appeared to get off to a slow start in Arkansas on Wednesday, with many of the state's counties starting off the day without an initial supply of the shots for the newly eligible age group.

Although Gov. Asa Hutchinson said Tuesday that "most" of the state Department of Health's 92 local health units had already received doses of the Pfizer vaccine for children, a list on the Health Department's website showed that only 38 of the units had them as of late Wednesday morning.

By late in the afternoon, Dr. Jennifer Dillaha, the Health Department's chief medical officer, said all the units -- which the state chose to be the first providers to administer the doses -- had the vaccine or would "in a few minutes."

She said all 38,100 child-size doses making up the state's first "wave" of vaccine shipments for the new age group had arrived in the state as of Wednesday.

The doses, which began arriving earlier this week, went directly to the Health Department's headquarters in Little Rock and to 43 of the units.

Some of those doses were then redistributed to the remaining health units.

In a tweet Wednesday, Hutchinson said he had directed the department "to expedite delivery of doses to local health units and to expand hours of operation."

"The current limited supply should be remedied as we're working with the federal government to get the doses we need for the entire state," Hutchinson said.

That tweet came after the department announced it will hold vaccination clinics for children ages 5-11 from 8 a.m. to noon Saturday for at least one of the units in each of the state's 75 counties.

In addition, from Monday through Nov. 10, all of the health units will be staying open until 6 p.m. to make it easier for working parents to take their kids in for the shots.

Hoping to get the vaccine for his 10-year-old daughter, Ansley, David Johnson, a former state senator and representative from Little Rock, said he called the central Little Rock health unit Wednesday morning but was told that the unit didn't have it yet.

He said he was told to call back the next day but decided instead to try again at 2:30 p.m.

That time, he had better luck.

Wearing a sparkly reindeer sweatshirt, Ansley didn't flinch as Angela Hopton, a communicable disease nurse specialist at the Health Department, gave her the shot in her right shoulder.

Afterward, the fifth-grader said it didn't hurt as much as the allergy shots she gets every two weeks.

Her father, now general counsel for Central Arkansas Water, said he wanted his daughter to get the shot Wednesday, instead of today, so that her second dose, three weeks later, would be before Thanksgiving.

Getting his daughter vaccinated will mean he'll feel comfortable allowing her to go back to in-person classes next semester -- and see her friends -- after she attended school virtually last year and this semester.

"She and I think so much about covid, and we're so ready for her to be vaccinated against covid," Johnson said.

"And go back to school," Ansley added.

"And return to school," Johnson said. "Today's been a long time coming."

Hopton told them that Ansley was the first child under 12 to get the vaccine, not just at the unit, but in the entire central region encompassing Pulaski, Faulkner, Saline, Lonoke, Garland, Perry and Grant counties.

Dillaha said she didn't yet know how many doses were administered to the new age group at the local health units on Wednesday.

"I doubt there were very many," she said.

"A lot of the places were still getting their vaccine during the day, so they weren't really advertising that they were there today."

But she said the units and pediatric clinics in the state had been getting calls about the vaccine.

"I was very encouraged by the demand for it -- that people were eager to get it now -- and I'm hoping that we will have good uptake in Arkansas," she said.

Under the state's plan, the second wave of shipments, totaling 28,500 doses, is expected to arrive at the Health Department's headquarters and five of the health units by the end of the week.

At least some of those doses will be redistributed to providers participating in a federal program that distributes free vaccines for children.

Of the 388 providers in the Vaccines for Children Program as of last week, 323 were also administering covid-19 vaccines, Dillaha said.

The Vaccines for Children Program includes almost all of the state's pediatric clinics, she said.

An additional 40,000 doses were expected to be delivered directly to Walmart stores and other providers participating in the Federal Retail Pharmacy Program for COVID-19 Vaccination.

Other providers that want the vaccine will be able to request it from the Health Department starting Monday.

Dillaha said the department was also working to set up vaccination clinics at schools.

Arkansas Children's, which participates in the Vaccines for Children Program, will start administering the vaccine "as soon as we receive our supply, likely later this week," spokeswoman Hilary DeMillo said in an email.

"Our primary care clinics in Little Rock, Pine Bluff and Springdale are ready to begin giving the vaccine when it's available," DeMillo said.

"We will add on additional clinics, as soon as we know what our supply looks like. We anticipate being able to vaccinate any child whose parents want them vaccinated. Supply will be staggered initially, but we expect to receive plenty of vaccine."

Walmart and Sam's Club stores will start administering the vaccine for children ages 5-11 at 5,100 pharmacies nationwide "later this week as supply allows," Lisa Smith, senior director of clinical strategy and operations at Walmart U.S., said in a blog post Wednesday.

People can make appointments online at walmart.com/covidvaccine or at samsclub.com/pharmacy/immunizations or can "simply walk in, based on availability," she said.

Walgreens said it would start administering the vaccine for the new age group "in thousands of stores nationwide" starting Saturday.

It said people could make appointments starting Wednesday at walgreens.com/schedulevaccine, through the Walgreens app or by calling (800) 925-4733.

A check on the website Wednesday showed appointments available at a store in North Little Rock as early as Monday and in west Little Rock late next week.

CVS Health said it would be offering the vaccine for the new age group in "select CVS Pharmacy locations" starting Sunday.

Its website, cvs.com, showed several appointments available as soon as Sunday at its pharmacy inside the Target in Conway and on Tuesday at a store in Rogers.

Other pharmacies, including Kavanaugh Pharmacy and The Pharmacy at Wellington, both in Little Rock, said they would begin taking appointments on their websites once they had received the vaccine or confirmation that the doses had been shipped.

Meanwhile, the state's count of coronavirus cases rose Wednesday by 546, an increase that was smaller by 13 than the one the previous Wednesday.

After falling by six on Tuesday, the number of people hospitalized in the state with covid-19 rose Wednesday by the same number, to 331.

The state's death toll from the virus, as tracked by the Department of Health, rose by 22, to 8,434.

The decline in the state's new cases "is not really steep right now" compared to the sharper drop in September from the peak of the state's summer surge, Dillaha said.

"I think that we still have community spread that's persistent," she said.

"There are enough people who have not been vaccinated or have not been recently recovered from covid-19, so they're still vulnerable."

After falling the previous two days, the number of the state's virus patients who were on ventilators remained at 88.

The number who were in intensive care rose by one, to 148, after falling the previous seven days.

After rising a day earlier, the average daily increase in the state's case count over a rolling seven-day period fell slightly, to 439.

With new cases outpacing recoveries and deaths, the number of cases in the state that were considered active rose by six, to 4,496.

It was the second day in a row the total had risen.

Dillaha said 14 of the deaths reported Wednesday happened within the past month.

Of the others, six occurred in August and two were in September.

She said 6.4% of the state's coronavirus tests were positive over the seven-day span ending Tuesday, up from the 6.3% that was initially reported for the week ending Monday.

The number of the state's virus patients who have ever been on a ventilator rose by six, to 2,918.

At 11,400, the increase in vaccine doses that providers reported administering, which did not yet include doses administered Wednesday to the 5- to 11-year-olds, was smaller by more than 1,300 than the one a week earlier.

Third doses, including booster doses of the Pfizer and Moderna vaccines for people who received their second dose at least six months ago, made up 62% of the most recent increase.

The increase also included 2,372 first doses, which was down by 188 from the increase a week earlier.

The average number of total doses administered each day over a rolling seven-day period fell to 9,980, the first time it had been below 10,000 since the week ending Friday.

According to the U.S. Centers for Disease Control and Prevention, 58.2% of Arkansans had received at least one dose as of Wednesday, up from 58.1% a day earlier.

The percentage who had been fully vaccinated remained at 48.1%.

Among the states and District of Columbia, Arkansas continued to rank 36th in the percentage of its population who had received at least one dose and 43rd -- ahead of Tennessee, Louisiana, North Dakota, Mississippi, Alabama, Wyoming, Idaho and West Virginia -- in the percentage who had been fully vaccinated.

Nationally, 66.9% of people had received at least one dose, and 58.1% were fully vaccinated.

Of the fully vaccinated population nationally, 10.7% had received a booster dose.