'A Mouthful of Air' 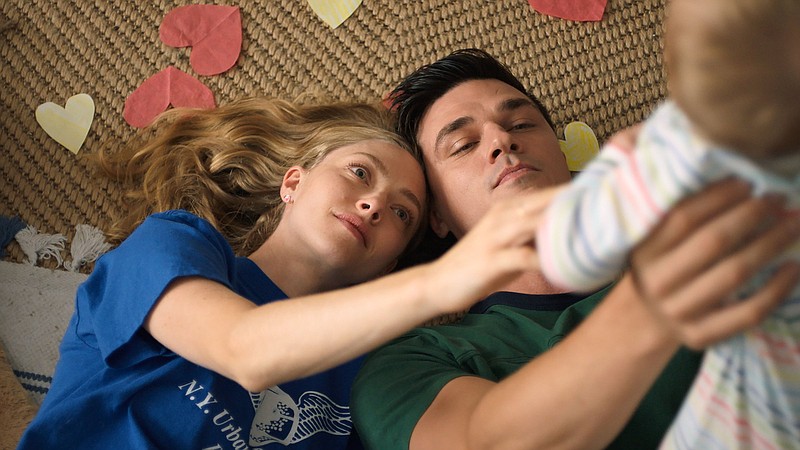 Baby blues: Julie (Amanda Seyfried) and Ethan (Finn Wittrock) play a young couple who hit a rough patch after their first child is born in Amy Koppelman’s “A Mouthful of Air.”

Having covered hundreds of films with unspeakable acts of violence, toxic ideologies (like D.W. Griffith's "The Birth of a Nation") and Steven Seagal's running, it was surprising to come across a disclaimer warning that "A Mouthful of Air" might be difficult or even traumatic viewing for anyone who has dealt with depression or anxiety disorders.

Having finished the movie, the warning is appropriate because many of the scariest things that happen outside of the movie screen don't feature gore or overt physical trauma. Freshman screenwriter-director Amy Koppelman (the novel "I Smile Back") ably captures that uniquely terrifying situation when the most dangerous nemesis you can encounter is the one living in your own skin.

Julie Davis (Amanda Seyfried) has a rewarding career writing and illustrating books for children, her handsome spouse Ethan (Finn Wittrock) and an adorable baby son named Teddy (Dylan Wittrock). Despite the colorful, animated cartoons that open the film, it doesn't take long to tell that Julie is having a miserable time.

Worse, she has little idea why.

Ethan smiles at her but doesn't seem to be processing what she's saying and doesn't seem all that impressed that she's going out of her way to please her young fans at a forthcoming reading. In addition, dealing with mundane tasks like bathing Teddy fill her with fear even though the tyke is in no danger.

Even when Teddy is contentedly watching "Sesame Street," she looks uncomfortably fixated on her X-acto knife.

The words "postpartum depression" are never uttered during "A Mouthful of Air," but Seyfried and Koppelman expertly replicate what it's like to live with it. If Seyfried was hoping for a long series of "Oscar clip" monologues to deliver, she'd be disappointed, but Julie's condition leads to a creeping, insidious despair instead of feverish outbursts. Seyfried understands that Julie might want to cry for help, but has a sense no one, not even her psychiatrist (Paul Giamatti), would want to listen.

Admitting that mundane experiences can send her into tailspins feels shameful, and her relatives don't seem interested in hearing about her situation. Ethan feels like he must remind her of how her slow-motion collapses and trips to the hospital are hurting Teddy and him, and his sister Lucy (Jennifer Carpenter) reinforces the point.

In some ways, her OB-GYN makes matters worse by casually reminding Julie that he now offers psychological counseling because of her experiences. In the early '90s when "A Mouthful of Air" is set (Koppelman's novel was published in 2003), her condition seems more like a character flaw than an illness. If the period of the film were a little more explicit, the film might have had even more impact.

Koppelman thankfully avoids demonizing Ethan, Lucy or Julie's mom (Amy Irving) for failing to understand that without proper help and support, Julie isn't capable of just getting over her terror and ennui. All are caring but are unable to process that Julie can't help her situation and that watching her as she showers seems humiliating to her.

The animated sequences and the breaks to hear Julie's tales are more than distractions. The stories, which Koppelman wrote and illustrated herself, show that Julie has a fine mind and that the world would be a sadder place without her.

They also help illustrate her situation more clearly than a monologue by Dr. Sylvester (Giamatti) might. He's a magnificent actor, but Koppelman is more concerned with making viewers feel Julie's experiences for themselves. Through quick cutting and Seyfried's deft, controlled performance, she largely succeeds.

Her impressionistic approach is generally helpful because there's often not a clear explanation for how mental illness overtakes a person. By gradually revealing Julie's situation, Koppelman lets viewers piece together the situation on their own, which is a much more rewarding experience.

When I saw the disclaimer, I did wonder if I should proceed because I've dealt with similar conditions for most of my life. Moving on through the rest of the movie did make me feel less isolated, and the stigma around mental illness prevents people from getting better. It's doubtful I could survive an attack by the bad guys in Steven Seagal's movies or another sprint, but getting past the note at the beginning of this film was worth the trepidation.

‘A Mouthful of Air’

Rating: R, for some language

Print Headline: 'A Mouthful of Air'