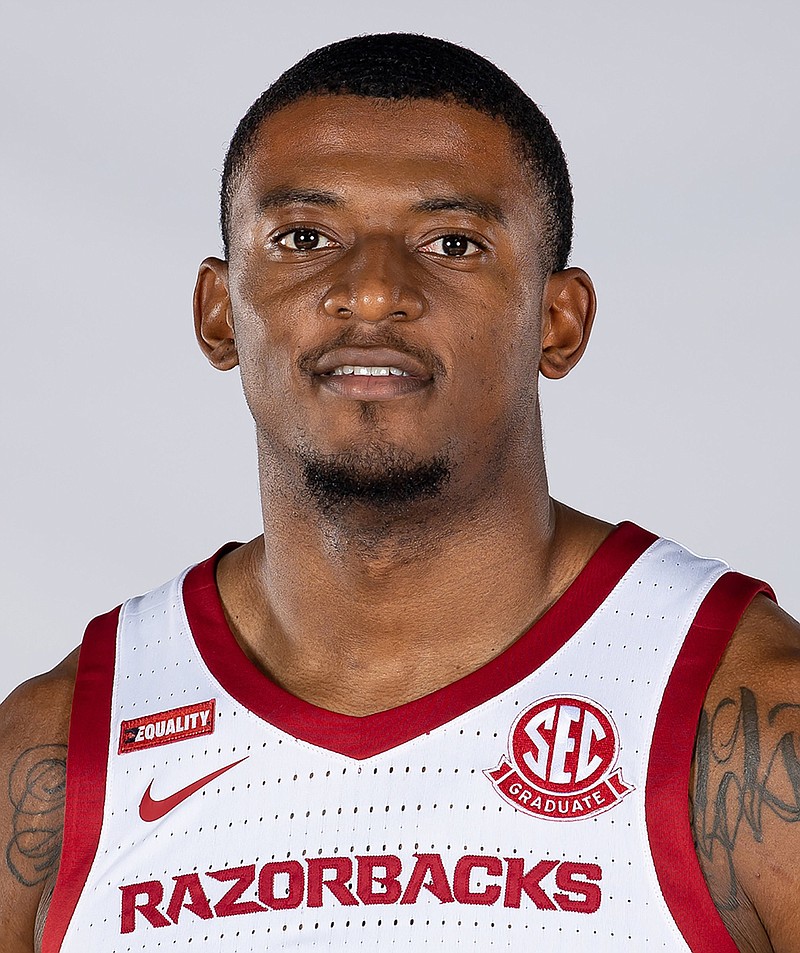 FAYETTEVILLE -- The Arkansas Razorbacks were plus-15 points in the 17 minutes forward Trey Wade was on the Walton Arena court in their 68-60 exhibition victory over North Texas last Saturday.

It was the first time Wade, a senior graduate transfer from Wichita State, played for the Razorbacks after he recovered from a knee injury that caused him to miss a lot of practices.

Wade also started a few weeks behind his teammates when he didn't arrive on campus until the middle of June after changing his commitment from Nevada to the University of Arkansas.

"It's amazing that we were plus-15, because [Wade] does not know our plays," Razorbacks Coach Eric Musselman said. "So we basically ran sets that four players knew and one player didn't.

"But he didn't get in the way. He set screens and went to the offensive boards a little bit and kept balls alive. And he defended and didn't take any bad shots.

"So therefore we played really good with him on the floor, because he didn't disrupt anything and he guards his guy. He plays hard, and he knows how to block out."

"It's always good when you have a player that knows how to defensive block out, because we have some guys that are struggling right now to block out.

"He brought good energy," Arkansas senior guard JD Notae said. "Trey is going to run the floor hard. He's going to play as hard as he can. When he's out there, you can expect that from him."

"He just brings a physicality to the game," Arkansas senior guard Chris Lykes said. "You always need that on the team.

"He did a great job rebounding. I know he was gassed out there, but he did his best. We definitely needed it."

The Razorbacks needed Wade's physical play inside because they were without forwards Jaylin Williams (back spasms) and Kamani Johnson (wrist).

Musselman said Williams and Johnson have practiced this week and he expects them to be available for Tuesday's opener against Mercer.

Wade's conditioning and grasp of the offense also continue to improve with additional practice time, which should make him more effective in games.

In Wade's two seasons at Wichita State -- after he played at Texas-El Paso and South Plains (Texas) Junior College -- he averaged 7.1 points, 5.5 rebounds and 1.4 assists. He averaged less than a turnover a game and 1.6 fouls.

"Number one, he's a great teammate," Musselman said. "He does all the right things. He's got good shot selection. He's not trying to play outside what he's good at.

"He's a great complementary guy out there that makes his teammates better, because he plays the right way."

With Wade's muscular build, he looks like he could play linebacker or tight end.

Maybe it could happen considering Musselman said a friend who is a scout for the NFL's Miami Dolphins, Adam Engroff, stopped by a recent practice.

Among college basketball players who went on to NFL careers are Tony Gonzalez, Antonio Gates and Julius Peppers.

"Trey had made the comment that if things didn't work out for him professionally with basketball that he would to try football," Musselman said. "And I told Adam that he should keep an eye on him during our practice.

"Certainly with his body, you think about basketball players turned football. I mean, there have been some good guys.

"Maybe down the road once basketball's over, Trey looks into that. But right now he's certainly a guy that gives us a physical presence for sure."