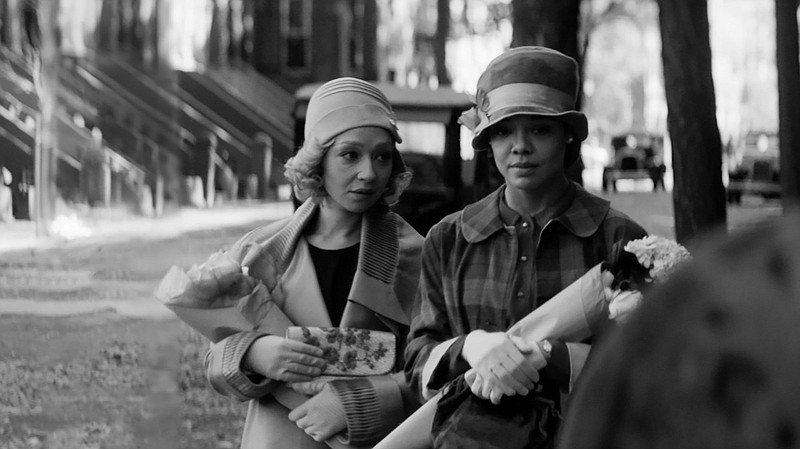 Clare Bellew (Ruth Negga) and Irene “Reenie” Redfield (Tessa Thompson) are mixed-race childhood friends who reunite as adults and keep each others’ secrets in Rebecca Hall’s “Passing,” based on the 1929 novel of the same name by Nella Larsen.

Rebecca Hall has always been an actress with a keen understanding of her characters. Much of her preparation work is instinctive, and she will sometimes spend months getting into the skin of the characters just to prove her instincts correct. That approach has led to an impressive career marked by an eclectic blend of eye-catching performances.

Hall takes those sharp instincts behind the camera for her directorial debut "Passing," a period drama based on Nella Larsen's 1929 novel of the same name. The film had its much talked-about premiere at this year's Sundance Film Festival and is now set to release on Netflix this coming Wednesday.

Set predominantly in the Harlem neighborhood of New York, "Passing" is an elegant and poignant film about biracial identity in the 1920s. Hall, who wrote the screenplay, comes from a biracial family and brings that unique perspective to her material. She touches on several other more opaque themes. But at its core, "Passing" is about a friendship -- one marred by jealousy, obsession and betrayal. And when you surround that friendship with the racial tensions of the time, you get a compelling story that may not hit every note, but it hits the ones that matter the most.

Noticeable right from the start, Hall's debut employs stunning black-and-white cinematography, and not just as a gimmick or a snappy nostalgic choice. The monochrome has an intriguing symbiosis with the narrative and is thematically in-tune with the story being told. Hall also presents her film in an arresting and evocative 4:3 aspect ratio which feeds the movie's themes of confinement and boundaries. Cinematographer Eduard Grau's images are a huge strength and practically every visual choice was made with meaning in mind.

The film's title comes sharply into focus during its opening scene. Irene (Tessa Thompson), a biracial woman, walks into a shop with a hat pulled tight on her head and covering a significant portion of her face. The shop is one where she would normally be denied entry solely because she's Black. But by "passing" as a white woman she's able to make her purchase and quickly get out unnoticed. And just like that, Hall gives us a vivid introduction to some of the thought-provoking themes she'll be exploring.

After leaving the store, a parched Irene stops for a drink at a Manhattan hotel. As she nervously waits for the waiter she's surprised to see Clare (Ruth Negga), an old friend who she hasn't spoken to in years. Clare is also biracial but has scrubbed out any hint of her true identity. Now she's "happily" married to a wealthy and garishly racist white man named John (Alexander Skarsgard) who has no idea his wife is Black. So as Irene "passes" just to gain entry into stores, Clare does it to maintain her lavish white-only high society lifestyle.

As the two old friends reconnect, they each begin to reevaluate their lives. Clare secretly visits Irene in Harlem and slowly starts to realize how much she misses her people and her culture. Her free-spirited no-boundaries personality quickly makes her a hit in the neighborhood and in Irene's home. Clare relishes the attention. Irene, on the other hand, has done everything by the book. She's married to a hard-working man named Brian (a terrific Andre Holland). They have two bright children and a nice Harlem home. But for her, seeing Clare's independence and self-assurance highlights her growing feelings of dissatisfaction.

From there the relationships fester with more complicated emotions. Hall handles them all with a surprisingly nuanced touch. She doesn't spell out how her characters feel from scene to scene, instead trusting her performers to convey it to us. Yet despite their great work, the emotions can be murky at times. For example, Hall tries to wedge in a muddled sexual tension between Irene and Clare, but outside of a few arbitrary gazes there's nothing there. These moments feel weirdly out-of-tune. But when Hall refocuses on the increasingly strained friendship, things really pick back up.

But as for the performances, Thompson and Negga dazzle, shrewdly bringing out the depth and complexities of their characters. Thompson is more subdued and internal; her character slowly pulled under by a range of suppressed emotions. Negga infuses Clare with her own energy and verve which feels unique to the character despite her being seen solely from Irene's point-of-view. Both actresses really deliver and they give us plenty to piece together and ponder.

"Passing" is an alluring work with great period detail, a delicate attention to character and an invigorating trust in its audience. As Devonte Hynes' delightful piano chords transition us from one scene to the next, Hall uses her story to poke at various weighty issues and social constructs. But ultimately "Passing" is an intimate look at a complicated friendship energized by two absorbing performances. It's a slow-moving story, even meandering a bit in the middle, but it really comes together in a powerful way, coated in ambiguity and with a final punch that feels both inevitable and earned.

Rating: PG-13, for thematic material, some racial slurs and smoking