PREP FOOTBALL: Greenwood's Gill gets thrill from stopping the run 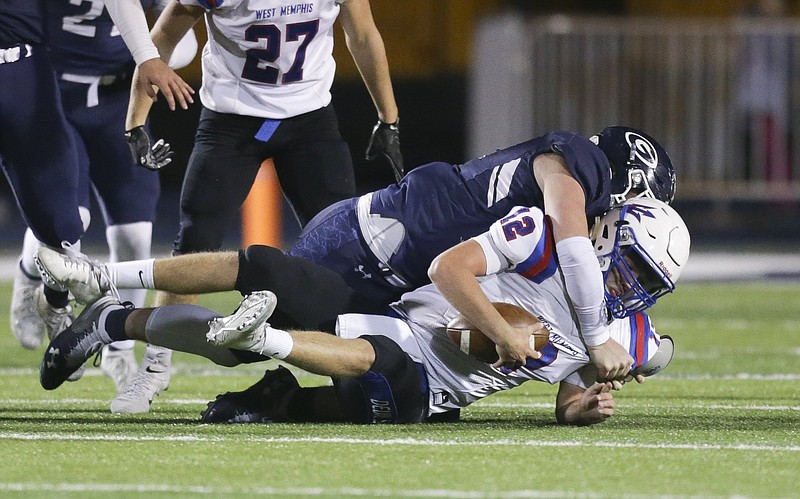 Greenwood’s Parker Gill, shown tackling West Memphis quarterback Bryson Jenkins last season, said he is enjoying the move from linebacker to defensive line. “It allows me to do different things,” Gill said. “It’s kind of a challenge because you never know what you’re going to have to do.” (NWA Democrat-Gazette/Charlie Kaijo)

That's exactly why the regular-season finale against Lake Hamilton on Friday concludes his favorite week of the season.

"I like defending the run more than the pass," Gill said. "This is my favorite week out of the year."

Greenwood hosts Lake Hamilton in the final week of the regular season for the sixth-straight year. The game has had huge playoff implications each year the two teams have met and does again this year. The winner will likely earn the second seed from the 6A-West, which carries with it a first-round playoff bye.

Gill has been a standout linebacker for the Bulldogs most of his career but moved up on the line of scrimmage this season. He plays alongside noseman Landon Kilgore and tackle Tyler Crossno, a pair of seniors who form the interior meat of the Greenwood's defense.

Gill, though, isn't down in a stance, but rather up.

"It gives me a lot of freedom," Gill said. "When you're down in a stance, you're watching the offensive line. With me standing up, I can see what the quarterback is doing and the running back is doing. It allows me to play a different style whether I see a pass or a run."

The last two weeks, Gill and the defense have played more of a pass defense against the Spread attacks of Benton and Van Buren.

That's not the case with Lake Hamilton's Wing-T offense.

"It's no secret to anyone, they're going to run the ball," Gill said. "They're going to sneak some passes in here or there, but we're definitely preparing to stop them from running the ball."

Lake Hamilton is averaging 44 rushing attempts per game and 334 yards per game on the ground. The Wolves average eight passes per game.

"We go from Van Buren and Benton, who throw it around," Greenwood coach Chris Young said. "Lake Hamilton might throw it if they get bored making four yards. Those guys are physical. They average 279 upfront. Our kids are excited. They've waited for this game awhile."

Gill made his presence known early in last week's 42-0 win over Van Buren. On third down on the opening possession, Gill had a sack for a loss of 10 yards just 80 seconds into the game to force a punt.

"It's been fun," Gill said. "It allows me to do different things. It's kind of a challenge because you never know what you're going to have to do. Every week it changes, I have a different role. Sometimes it's putting the rush on the passer and sometimes it's filling gaps."

"It's like linebacker, but I'm walking up every play," Gill said. "They try to keep me outside containment. I still make all the calls on the defense and get everyone lined up. I still have that same role. I'm just playing more down on the line."

It makes sense that Gill would have a deep knowledge of the defense with his dad serving as Greenwood's defensive coordinator, Jason Gill.

"That relationship, it's a challenge, but I've enjoyed it," Jason Gill said. "It's been awesome."

Part of the enjoyment has been watching his son excel as an outstanding player.

"He actually can play so it's not like anybody can say he's just playing because he's the coach's kid," Jason Gill said. "He grew up around it and been in the locker room since he was 3-years-old. He loves it. That's what I like about it, and I get to coach him."

Parker Gill also was named a team captain for the Bulldogs this season.

"He plays it the right way," Young said. "He plays hard. He's an emotional guy. He likes football. He's been one of leaders on defense. He's a captain that the kids voted for. They respect him."

Greenwood is 6-0 against Lake Hamilton since the two teams have been joined in the 6A-West. The Bulldogs won twice last year, including 38-28 in the regular season and 49-24 in the state championship game.

Lake Hamilton led in both games, leading in the third quarter, 21-10, after scoring on the opening possession of the third quarter in the regular-season game and then 10-0 four minutes into the title game.

The game has developed into a rather heated one between the two teams, both of which are headed to the playoffs regardless of the outcome.

"It doesn't really matter, we're going to go into the playoffs knowing we can beat anybody," Parker Gill said. "We're going to go out there and play this game as best we can and try to get the win."