IN THE GARDEN: Rough stink bug is beneficial, preying on soft-bodied pests that eat plants 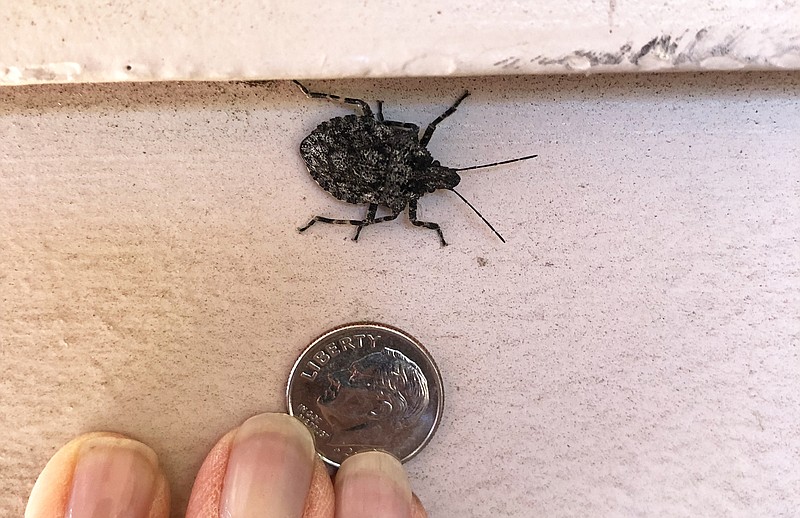 The rough stink bug is a beneficial insect that dines on garden pests. (Special to the Democrat-Gazette)

Q Is this a stink bug? [The reader sent a photo.] I've had several so far this year. I live in Rogers.

A The insect is a stink bug. This particular one is the rough stink bug, a beneficial insect. They have their piercing and sucking mouthparts but are not harmful as they prey on caterpillars, the plant-eating larvae of beetles, adult beetles, aphids and other soft-bodied insects.

Q Attached is a picture of our oak leaf hydrangea beside Loch Lomond in Bella Vista. It is very healthy but the dried blossoms are unusually red this fall. Usually, they are brown. Any ideas on what might have caused this?

A It looks like your plant is in quite a bit of sun. The farther north you are, the more sun an oakleaf hydrangea will take. It is possible the plant got too dry in September. The spent blooms usually go from white to pink to tan. The foliage is usually the glorious red. Some varieties will show other colors in the blooms as they age, but gardeners look forward to the show of the foliage.

Q Would cannas and gardenias that are currently in pots survive the winter if I planted them in the ground now?

A If they are outside in containers, the gardenias would be happier in the ground than in pots. The late planting will not give them time to really establish their roots systems, but you can apply extra mulch around the base of the gardenia. Be prepared to cover it if we have weather like we did in February (hopefully not!). The cannas are bulbs, so you could store them in the garage until planting next spring; but also you could plant them now and mulch. After a killing frost, cut off the old foliage and add the extra mulch then.

Q As you know, now is a great time to harvest white dogwood seeds for germination and planting in the spring. I remove the red, outer pulp and place the seeds in a sealed plastic bag with moisture and potting soil, leave it for 4-5 months in the refrigerator, then plant them in the spring in peat pots. They will germinate and grow 1 to 2 inches, and then I plant them in the ground with a protective collar or a stake so I know where they are. I've experimented with not removing the pulp, and it seems the germination rate is lower. After a few years you have a nice white dogwood tree for little cash outlay.

A Great idea. It is always preferable to remove the outer pulp. If you don't, the pulp can mold in the bag, which could affect germination. The cool, moist time spent in the refrigerator is known as "stratification."

Q I have a huge old boxwood that I would like to cut back to about half its size. Can I do it now, or when is the proper time?

A I don't like to prune anything hard as we are preparing to head into the winter. Think back to last February and the damage that many plants suffered. Live with the overgrown plant and wait until winter has passed before pruning. That way, if there is any winter damage, the top part — which you plan to prune off anyway — will take the hit. With boxwoods, we like to get the pruning done before the big burst of spring growth. Boxwoods tend to keep most of their foliage on the outer edges of the plant, with the interior that looks like dead sticks. Catching the spring push allows for a quicker recovery.