Receiver's slow start in the past 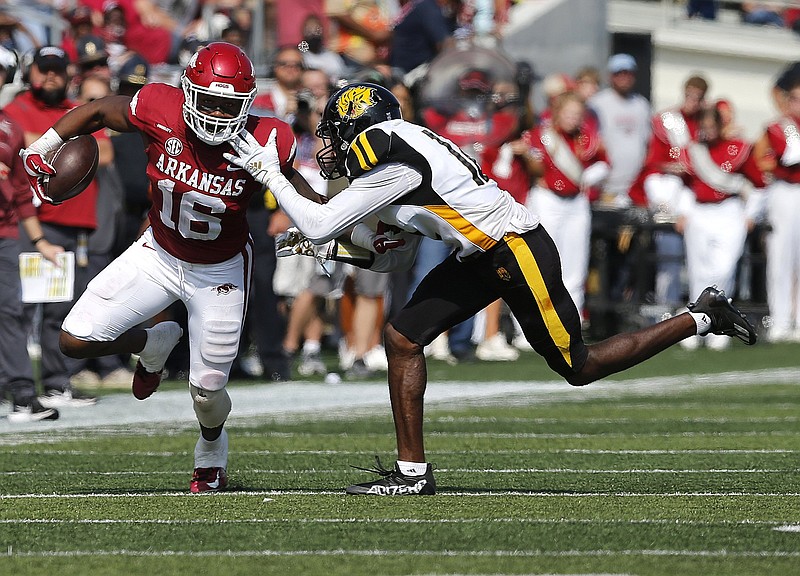 Arkansas wide receiver Treylon Burks has been projected as an NFL first-round draft choice by several publications. “Really, I want to play for Arkansas, and that’s who I’m playing for right now,” he said. (Arkansas Democrat-Gazette/Thomas Metthe)

FAYETTEVILLE -- Mississippi State has the SEC's No. 1 passing offense coming into today's game against the University of Arkansas at 370.9 yards per game, but the Razorbacks have the conference's top receiver.

Despite a slow start to the season because of a foot injury, Arkansas junior Treylon Burks leads the SEC with 717 receiving yards on 42 catches.

Burks has played all eight games this season, but he missed several training camp practices and looked rusty in the first two games, combining for 10 catches and 79 yards against Rice and Texas.

"I think he's having a tremendous season," Arkansas safety Joe Foucha said. "He started off slow due to the injury he had, but he's still the guy at the end of the day, and he's showing that each game.

"Especially in these big, big games that we're playing, he shows up every single time."

"The guy's an absolute animal. He's a beast," Arkansas linebacker Hayden Henry said. "When the ball's in the air and I see he's the intended receiver, I get really excited because I know something special's about to happen.

"The guy's just an incredible hard worker, extremely humble. Keeps his head down, keeps his nose to the grindstone. Loves to work, loves to practice.

"And you see it come to fruition on Saturdays when he makes plays like he does. That doesn't just happen because of his ability. The guy likes to work and show up and he earns everything that he gets."

Burks is the first Razorback to have two touchdown catches of 85 or more yards. He took a short pass from KJ Jefferson and raced for a 91-yard score against Georgia Southern and beat man-to-man coverage for an 85-yarder against Texas A&M.

There also have been several leaping catches by Burks against tight coverage, such as the 37-yard gains he had on back-to-back plays at Ole Miss.

"Like I always say, Treylon is just a freak of nature," Jefferson said. "He's a great athlete. His catch radius is crazy.

"Even if it's not in the right spot, I know he'll come down with the ball 90% of the time. Knowing that I have a guy like that on my team, I can just get him the ball in space and let him make plays."

When Burks has done interviews, he downplays his own stats and credits teammates.

"I've known Treylon since we came in together and stayed together and all that," Jefferson said. "I know Treylon as a person, and he's just humble.

"He lives in and embraces the moment. He doesn't try to look ahead or look for the future. He's just playing with us, the Razorbacks. That's all he talks about, is Razorbacks."

Burks is projected as a first-round pick in several 2022 NFL mock drafts, including No. 13 to the Philadelphia Eagles by Sports Illustrated, No. 20 to the Cleveland Browns by CBS Sports and the No. 21 pick by the New Orleans Saints by The Sporting News.

"Really, I want to play for Arkansas, and that's who I'm playing for right now," Burks said after having 4 catches for 89 yards and 2 touchdowns against the University of Arkansas-Pine Bluff two weeks ago. "The NFL will come later and I'll worry about that when that time comes."

Burks had his first rushing touchdown -- a 49-yarder -- against UAPB. He has six carries for 73 yards this season and 30 for 181 for his career.

"We know he can go down the field and catch the one-on-one contested ball, but there's easier ways to get him the ball than that and we've got to find those ways. I think we have those in for the game plan."

Chris Gragg, another Warren product, played tight end at Arkansas and had 1,003 receiving yards as a teammate of Wright and Childs.

"We've had a lot of talent come out of Warren with Jarius Wright, Greg Childs and Chris Gragg," Burks said. "To be a part of that means a lot.

"They always text me and keep me motivated, tell me to worry about the NFL later. It'll come. Just put your head down and go to work."

Print Headline: Receiver's slow start in the past