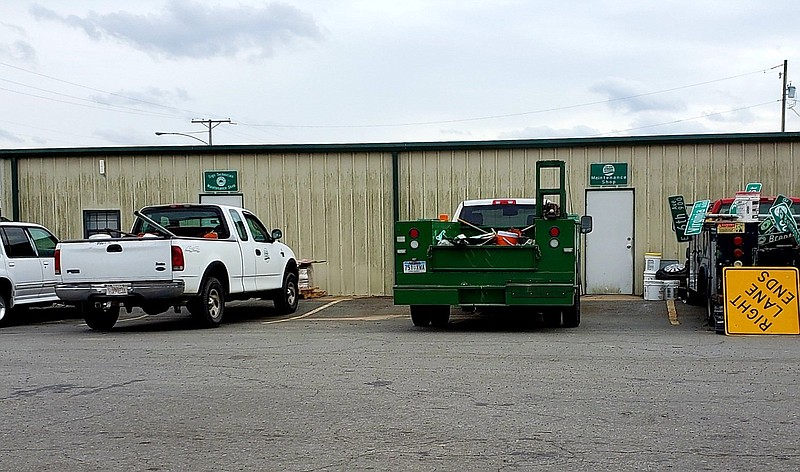 The Pine Bluff Street Department complex on Ohio Street has two entrances in one building that separate sign makers from sign hangers. Restroom accessibility in one part of the building was part of a recent investigation into allegations of racial discrimination in the department. (Special to the Commercial)

An investigation into unfair and racially motivated treatment of employees in the Pine Bluff Street Department concluded that no such practices had taken place.

Human Resources Director Vickie Conaway and Mayor Shirley Washington's chief of staff, Cynthia Anderson, acted as lead investigators with assistance from other staff from their offices.

Questionnaires were given to 29 employees who were able to submit their answers anonymously. Follow-up interviews were then conducted. In all, 30 employees were interviewed.

The street department's director and assistant director were also interviewed separately and allowed to respond to allegations made against them, stated the report.

"Questionnaire results, coupled with employee interviews, did not produce any evidence or credible account that racial discrimination has motivated the way in which jobs have been assigned, promotions offered, disciplinary actions issued, or training issued or denied," stated the report's conclusion. "There has also been no record of racial discrimination complaints that department management has failed to address. Furthermore, no pattern of racist actions by management has been found. In conclusion, investigators did not find evidence to substantiate the allegations of employee mistreatment due to systematic racism in the street department."

The investigation was conducted after the mayor's office received complaints from concerned members of the community. One contention had to do with a locked bathroom and a wall that was installed, both of which were seen as discriminating against Black employees.

Investigators found, however, that when the equipment room was locked in the past, it was locked for two reasons.

"One was to provide privacy to women who worked in the sign shop, giving them a restroom separate from men," the report stated. "Another reason was to protect the machinery in the equipment room from unauthorized use. Only people who were trained to use that equipment were allowed to access it."

The report stated that after the two women were no longer assigned to the sign shop, the door remained locked to continue protecting the equipment from unauthorized use.

"Whenever the door was locked, both Black and White employees were unable to unlock that door, unless they had training and authorization to use the sign machine," the report stated. "Employees could knock on the door, and they would be allowed inside, if the shop was being occupied and supervised by trained personnel. When the wall was installed in front of the machinery, with the purpose of protecting machinery from unauthorized use, it did not obstruct access to the restroom.

"Both White and Black employees were still not allowed to access the sign machine, positioned behind the wall, unless they had training and authorization to use the machine. Therefore, there is no evidence to suggest that access to the restroom or any equipment in the sign shop has been denied to individuals based on race."

According to the report, when employees were asked if either they or someone they knew at the department had been subjected to a racial slur or offensive remark, two employees mentioned an incident in which a white employee called a Black employee "Bubba," which was perceived by certain Black employees as a "racially charged/insensitive comment."

The report stated that investigators were told by "multiple employees" that management addressed the matter.

In July, when issues with the locked restroom at the Street Department became public, Council Members Ivan Whitfield and Glen Brown Jr. visited the complex to see if the change had been implemented, only to discover the wall had been constructed.

Whitfield said the construction of the wall gave the appearance of deliberate contempt for council members by the person responsible and was a reminder of the days of segregation.

Community activists, led by Kymara Seals, called the wall an example of racism and began their own investigation into the matter.

"Upon investigating, we discovered biases and discrimination in areas of employee salary, possible promotions and use of company vehicles, all which appeared to be based upon race," said Seals. "We discovered a toxic and hostile work environment where the Black employees had endured unfair practices and retaliation for speaking out. This culture at the street department appears to have been allowed for at least three decades, possibly more."

Seals said on Aug. 4 she met with Rick Rhoden, the director of the Street Department, along with Dr. Clifford Flowers and Council Member Lloyd Holcomb Jr.

"When speaking directly with the director of the street department, he firmly expressed numerous times that he was not racist but we explained that his actions were in fact racist," said Seals.

On Aug. 17, a meeting was held in the city council chambers with Washington.

"This was a very open, honest and transparent meeting where we expressed our concerns about every aspect of what our investigation had yielded thus far," said Seals. "We also made it very clear in the meeting that Rick Rhoden's employment should be terminated and that she would be held accountable as mayor of the city."

Seals said it was weeks before she received a response from Washington, who said they would conduct an investigation.

On Sept. 21, Washington released a statement to a Little Rock television station on the matter stating: "Equity is always important in city operations, as it should be with any other work environment. The claims made at the street department are being taken seriously as we continue our investigation."