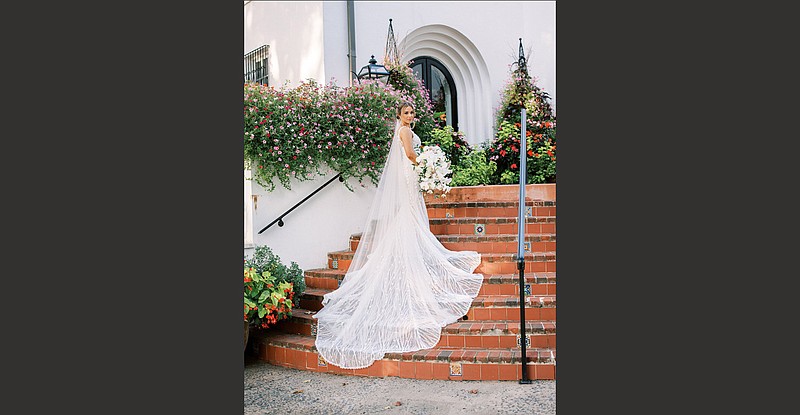 Brooklyn Kathleen Burks and Zachary Ryan Griffin were united in marriage at 5:30 p.m. Saturday, Oct. 30, on the lawn of the Clinton Presidential Center. Mark Henry of Fellowship Bible Church officiated.

Jonie and George H. Burks Jr. of Little Rock are the parents of the bride. She is the granddaughter of Phyllis and Jim Miles and Jo Ann and Presley Jackson, all of Little Rock; Patricia and Muncy Harris of Bryant; and George Burks Sr. of Benton.

The groom is the son of Robin and Chris Griffin of Lexington, N.C. He is the grandson of the late Brigitte and Alphonse Lallier and the late Gwendolyn and Billy Griffin, all of Brewton, Ala.

Vows were exchanged under a square arbor decorated with flowering branches, white hydrangeas, roses and stock in shades of white, cream and pink. Nuptial music was by vocalist Susej Thompson, aunt of the bride, and guitarist Matt Stone and violinist Nick Sungenis.

The bride, escorted by her father, wore a sleeveless gown of waterfall lace with three-dimensional floral lace appliques over a biscotti-colored silk lining. The bodice had a V-neckline and floral lace shoulder straps and the skirt extended to a semi-cathedral length train. Her tulle veil was secured with a comb embellished with hand-applied floral details from her mother's wedding veil. She carried a cascade of white phalaenopsis orchids, white hydrangeas, quicksand roses, playa blanca roses and pink mondial roses.

Serving as their sister's maids of honor were Logan Burks and Jordan Burks, both of Fayetteville. Bridesmaids were Lauren Henderson of Los Angeles; Mary Michael Knight of Tuscaloosa, Ala.; Annalee Rhodes of Dallas; Shelby Cebert of Tampa, Fla.; Michaela Parr of Chicago; Julia Stauffer of Nashville, Tenn.; Kaitlyn Jones of High Point, N.C.; and Melinda Griffin of Atlanta. They wore cinnamon-rose colored satin Empire gowns with cowl necklines and carried round bouquets of hydrangeas and roses.

Flower girls were Charlotte Griffin of Atlanta, niece of the groom, and Olivia Burks of Little Rock, cousin of the bride. Ring bearer was Robert Jones of High Point, nephew of the groom.

The father of the groom served as best man. Groomsmen were Chad Smith of Snowmass, Colo.; Christopher Griffin of Atlanta; Bobby Jones of High Point; Ian Ross of Tuscaloosa; Franklin Evans and Landen Huff, both of Birmingham; Caden Lodge of Destin, Fla.; Zach Whitworth of Brewton; and Steve Lueck of Nashville.

Guests were seated by Stephen Thompson, Titus Thompson and Jacob Thompson, all of Little Rock.

A reception was held in the center's Great Hall. Guest tables held a mix of wedding flower arrangements of various heights. The head table had a floral runner of foliage, hydrangeas and roses. Music was by Chinatown Band. Assisting were Ana Thompson, Gabbie McPheeters and Kyndal Burks, all of Little Rock.

The groom also graduated from the University of Alabama with a bachelor's degree in finance. He is a work flow manager at Robins & Morton.

After a honeymoon in Cancun, Mexico, the couple will live in Charlotte, N.C.