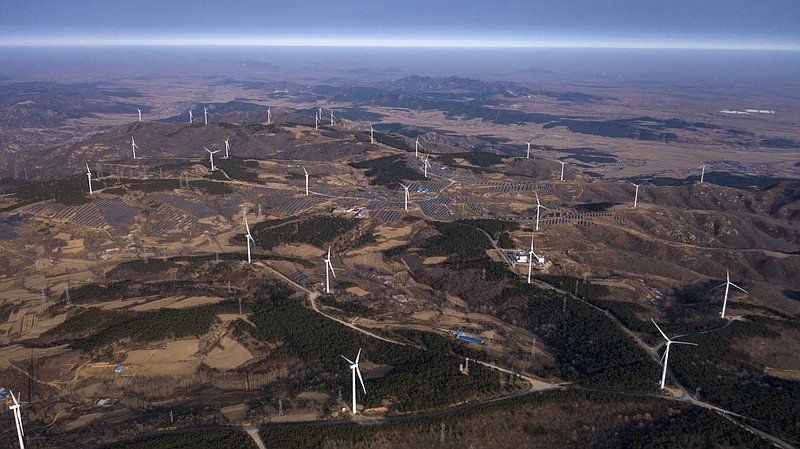 Chinese turbine makers have made their local wind power market the biggest in the world with a scorching pace of installations. Now, those giants want to take a larger slice of burgeoning global demand.

Companies including Xinjiang Goldwind Science & Technology, Envision Group and Ming Yang Smart Energy Group have typically made only small inroads into overseas markets, though now plan to invest in factories abroad to take market share from European and American rivals such as Vestas Wind Systems and General Electric.

China's largest turbine maker Goldwind said it will be able to "run shoulder by shoulder" with overseas wind giants starting next year, while Ming Yang has made expanding in the offshore wind market in Europe a top priority.

"We take that very seriously," said Marc Becker, head of the offshore unit at Zamudio, Spain-based Siemens Gamesa Renewable Energy, the largest supplier of offshore turbines outside China. Companies in China "have proven in many industries that they can be fast, and they know how to build turbines," Becker said.

Competition is heating up with global demand for wind power ready to surge. Regions from Europe to India and South America are scaling up renewable energy installations to help meet aggressive climate goals, and President Joe Biden has set a target for the U.S. to develop offshore wind capacity of 30 gigawatts by 2030, up from zero today.

Chinese turbine makers have already shown they're capable of competing on size and price. European companies have long competed to deliver the biggest turbines, with Vestas taking the lead earlier this year with a product boasting 15 megawatts of capacity. That title was short-lived after Zhongshan, Guangdong-based Ming Yang topped it with a 16-megawatt machine in August.

State-owned China State Shipbuilding has unveiled the largest offshore wind turbine model, which also has 16 megawatts of capacity and a rotor diameter of 256 meters, according to BloombergNEF. Larger turbines should help Chinese players make more inroads in the offshore wind sector.

While higher prices of steel and other raw materials are impacting manufacturers in Europe and the U.S., turbine prices in China are about 40% cheaper than overseas. Producers in the highly fragmented market are trying to undercut each other, pushing the cost of China-produced models to a new low in the first half of 2021.

That fierce local competition is also spurring China-based producers to look abroad, even with domestic demand expected to pick up after a slowdown this year.

Goldwind surged as much as 10% last week in Shenzhen, and Ming Yang jumped 10% to a record in Shanghai.

Some overseas customers are already buying. Italian renewable energy developer Renexia plans to use 10 of Ming Yang's 3-megawatt turbines for a project off Italy's southern coast. The company chose the turbines because they were well-suited to the Mediterranean's winds, according to Andrea Porchera, a spokesman for Renexia.

That small project is seen as a sign of what's to come, and Ming Yang is planning to build a manufacturing base in southern Germany, Vice President Ye Fan said in an interview.

Goldwind is aiming to export around 2 to 3 gigawatts annually from 2022, up from about 1.5 gigawatts over the past few years, according to President Cao Zhigang. That would boost its share of the overseas wind market to 5% from 3%, Cao said.

Still, Chinese companies face challenges to win more share of a global market that's typically been dominated by a handful of key players. Outside China, there's a bigger focus on efforts such as engaging with local communities, said Thomas Keller, president of Vestas China, the Danish firm's Beijing-based unit.

"In China, a lot of the hard work is with permitting, and then everything is easy," Keller said.

Processes overseas to verify the quality of turbines are also stricter and can take longer, meaning projects using China-made turbines could face difficulties in quickly gaining approvals or securing investment.

Some solar equipment manufacturers have seen exports disrupted by U.S. action over allegations of human rights abuses and forced labor in China's northwestern Xinjiang region. Goldwind, based in Urumqi, Xinjiang, emphasizes human rights protection in its supply chain, and does not tolerate the use of forced labor, according to a statement on its website.

With demand rising, particularly in the offshore wind sector, there should be a greater role for China's producers in overseas markets, said Mats Sellei, Stockholm-based director of procurement and supply chain at K2 Management, an engineering and management consultancy.

"The market of offshore wind at least in the next couple years will become truly global," said Sellei. "There are too many projects and too few suppliers. If you just look at market forces, the Chinese companies have a good opportunity."