Johnson makes most of chance against Bulldogs 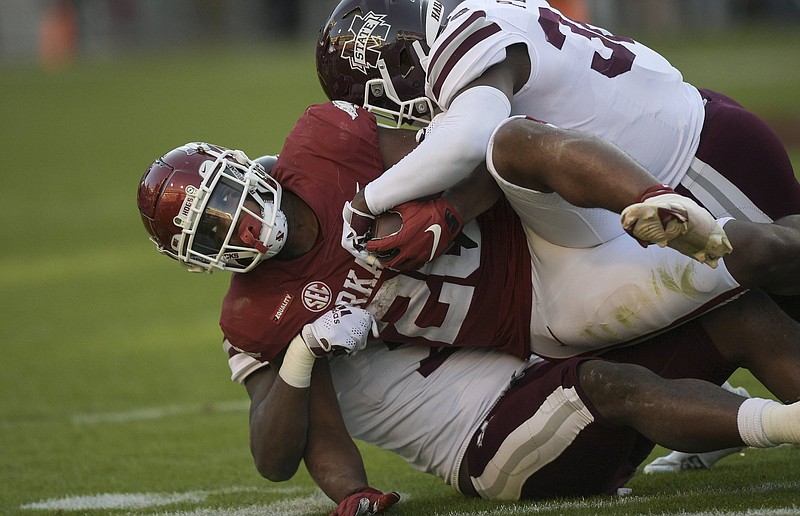 FAYETTEVILLE -- University of Arkansas Coach Sam Pittman made it clear this week that he wanted running back Dominique Johnson to get the ball more.

"Whatever that is, he needs a lot more carries. I thought we had that figured out, but we didn't. I'm positive we've got it figured out."

Johnson, who came into Saturday's game against Mississippi State tied for third among the Razorbacks' running backs in rushing attempts with 39, but first in yards per attempt at 7.9, helped carry Arkansas to a 31-28 victory over the Bulldogs.

A sophomore from Crowley, Texas, Johnson had career highs of 17 carries for 107 yards and 2 touchdowns.

Johnson's second touchdown came on a 4-yard run with 21 seconds left, and he then added a two-point run to put the Razorbacks ahead 31-28.

"I think it was awesome," Pittman said of Johnson's performance. "He's done that all year, we just haven't given him the carries, to be honest.

"But he's done what he did tonight every time he's out there."

In Arkansas' seven previous games Johnson's most carries were six four times, including the Razorbacks' most recent game when he rushed for 91 yards against the University of Arkansas-Pine Bluff two weeks ago.

"He's good everywhere, but he's better as you wear them down, and you saw that at the end," Pittman said. "He didn't have to break any tackles on that 4-yard [touchdown] run at the end, and I think he just walked in on the two-point conversion."

Johnson said the offensive line did a tremendous job on his final two runs.

"Those five guys up front blocked their tails off," Johnson said. "Nobody touched me on the touchdown. The hole was as big as I don't know what. The two-point conversion was pretty much the same way. They did their job, fired off the ball, made a big gap for me and I went in and scored."

Johnson had key plays as well to start the Razorbacks' game-winning, 75-yard drive.

On the first play, quarterback KJ Jefferson hit Johnson for a 7-yard gain. Then Johnson ran for 11 yards.

"Dominique stepped up big time," Jefferson said. "He took advantage of his opportunities that were given to him today.

"His confidence level is through the roof now. I told him, 'Just play your game. That's all you've got to do.' "

"My mindset -- well pretty much the whole offensive mindset going into that last drive -- was that we needed to score," Johnson said. "So everybody had on their mind that we're going to go down here and score and we're going to win this game and become bowl eligible."

Arkansas junior receiver Treylon Burks, who had 6 catches for 82 yards and 3 carries for 39 yards, said he was impressed by Johnson's maturity in a pressure-filled game.

"Really, he showed up and he played like he was a senior to me," Burks said. "He went out there and balled out for his team.

"From us older guys, we couldn't ask for more -- just go out there and play your heart out for us."

Senior linebacker Grant Morgan said the Razorbacks have seen Johnson run in practice the way he did Saturday.

"He's an SEC back. He works super hard and he does it every single day, so I'm proud of him, proud of the man he's becoming on the football field, because he's made our football team a lot better and it's showing.

"That's why coaches are giving him more reps and more carries."

The Razorbacks rushed 45 times for 202 yards against a Mississippi State defense that had been holding opponents to 89.5 yards to rank fifth nationally.

"We pretty much had a running mentality coming into this game ... had an emphasis on running the ball this week," Johnson said. "Coach Pittman met with me this week and we talked about running the ball.

"He told me I needed to be prepared to run the ball."

Print Headline: Johnson makes most of chance against Bulldogs