Little has big day with 3 FGs 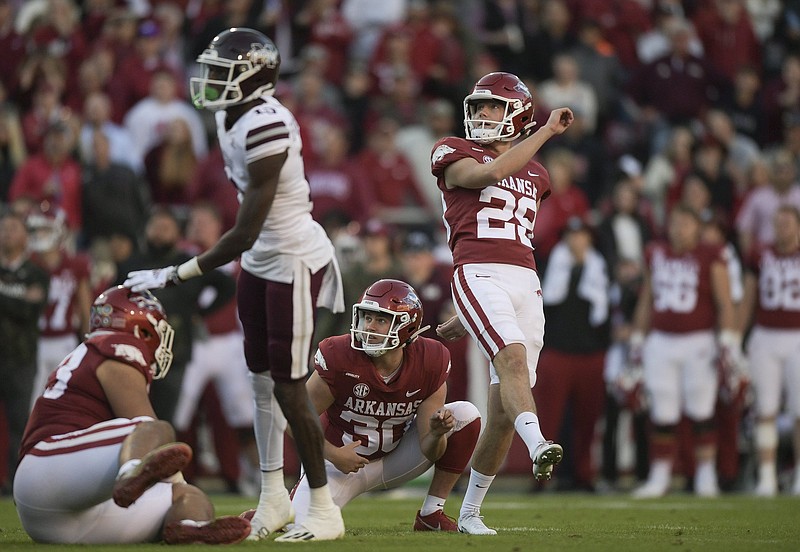 FAYETTEVILLE -- Cam Little showed off a big foot on Saturday.

Little, a University of Arkansas freshman from Moore, Okla., hit his three longest field goals on the season from 51, 48 and 46 yards in the Razorbacks' 31-28 victory over Mississippi State on Saturday.

Based on research by the UA media relations office, Little is the only Razorback since 1997 to make three field goals of 45 or more yards in the same game.

Little, who missed from 42 yards in his fourth attempt on Saturday, is now 14 of 18 on field goal attempts this season.

Some fans didn't agree with Coach Sam Pittman's decision to have Little attempt a 51-yard field goal with Arkansas facing fourth and 2 at the Mississippi State 33, but he hit it to give the Razorbacks a 16-14 lead with 4:38 left in the third quarter.

"Yeah, I got booed on the 51-yard field goal that he made," Pittman said. "We went up by two. I mean, I am at practice and I see him kick and I felt like he could make a 51-yarder.

"I wanted to take the lead. He really was valuable. He missed the one, but he kicked some long field goals tonight and did a really good job with that."

Arkansas went 0 for 2 on passes by wide receivers Treylon Burks and De'Vion Warren.

On the first snap of the game, Burks took a pitch from quarterback KJ Jefferson and overthrew Warren --who had broken open over the middle -- on a deep pass.

"It didn't happen. [Warren] got behind him, but we just didn't throw and catch."

Late in the first quarter Warren caught a lateral from Jefferson and threw to Burks, who made a diving catch, but was barely out of bounds.

Mississippi State sophomore quarterback Will Rogers had more incompletions on his first four pass on Saturday than he had the entire game last week when the Bulldogs beat Kentucky 31-17.

Rogers was 0 of 4 on Mississippi State's first two series before completing his first pass to Makai Polk for a 16-yard gain.

Against Kentucky, Rogers hit 36 of 39 passes, including his last 15.

Rogers finished 36 of 48 against Arkansas for 417 yards and 4 touchdowns with 1 interception.

Treylon Burks, a junior from Warren, had six catches for 82 yards and moved up to No. 8 on Arkansas' career list for receiving yards.

The Razorbacks improved to 18-13-1 all-time against Mississippi State, including 10-4-1 in Arkansas and 4-4 in Fayetteville.

Saturday marked the Razorbacks' first victory over Mississippi State at home since they beat the Bulldogs 44-17 in Little Rock in 2011.

Arkansas, which won 21-14 at Mississippi State last season, has beaten the Bulldogs in back-to-back years for the first time since a three-game winning streak from 2009-11.

Arkansas improved to 2-3 against teams ranked in this week's College Football Playoff poll with their victory over No. 17 Mississippi State.

A replay review in the first quarter went the Razorbacks' way.

Officials initially ruled running back Dominique Johnson had fumbled at the end of a 13-yard run and Mississippi State cornerback Martin Emerson had recovered the ball at the Arkansas 45.

A replay review showed Johnson already was down when the ball came loose, the call was overturned and Arkansas retained possession.

Arkansas senior offensive tackle Dalton Wagner and senior defensive lineman Markell Utsey were both back in the starting lineup after they had missed the Auburn and University of Arkansas-Pine Bluff games because of injuries.

Wagner underwent finger surgery and Utsey had an undisclosed injury.

Arkansas' helmets featured some blue added to the Razorback logo along with red and white in recognition of Military Appreciation Day.

The Arkansas coaching staff wore military tops and hats and there was a flyover with helicopters prior to kickoff.

Steve Atwater, the former Arkansas All-Southwest Conference safety who is the Razorbacks' career interception leader with 14 from 1985-88, was with UA Coach Sam Pittman during the pregame Hog Walk.

Atwater, inducted into the Pro Football Hall of Fame last summer after playing most of his career with the Denver Broncos, wore his gold Hall of Fame jacket while walking with Pittman. Atwater also wore the jacket when he was recognized on the field during a timeout in the second quarter.

Seattle Seahawks running back Alex Collins, who rushed for 3,703 yards for Arkansas from 2013-15, also was recognized on the field in the second quarter.

Collins was able to be back on campus before Seattle has an open date this weekend before playing at Green Bay on Nov. 14. Collins has rushed 74 times for 304 yards this season and has six catches for 65 yards.

Arkansas' men's and women's cross country teams that swept SEC championships were introduced and led the crowd in a Hog call during a timeout in the first quarter.

This year marked the 19th time the Razorbacks swept SEC cross country titles going back to the 1991 season when Arkansas joined the conference.

COMMENT No. 1 inside LB in the nation making 2nd visit