Musselman has Razorbacks back among elite 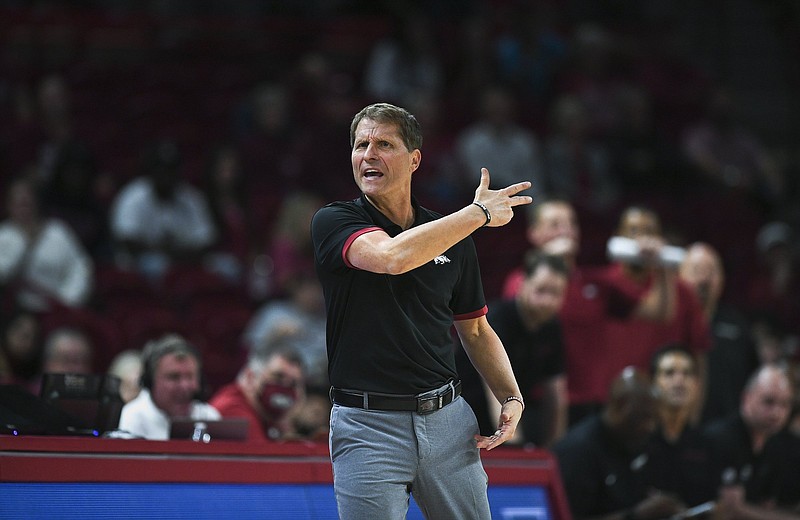 Arkansas Coach Eric Musselman has turned around the fortunes of the Razorbacks’ men’s basketball program heading into his third season at the helm. The Razorbacks are sold out of season tickets for games at Walton Arena for the first time since the 2001-02 season. (NWA Democrat-Gazette/Charlie Kaijo)

FAYETTEVILLE -- Before Eric Musselman got into coaching, his first job in pro basketball was selling tickets for the Los Angeles Clippers.

Musselman thought he was being hired as director of player personnel for the Clippers after graduating from the University of San Diego in 1987, but found out that first he had to work in ticket sales.

"And that was not an easy sell in Los Angeles at that particular time," Musselman said. "If you look at the year I sold tickets for, which was 1987-88, they were not very good."

Despite the Clippers' record, Musselman managed to sell enough tickets to get recognized by the team for his efforts before he focused on evaluating players and being an assistant to General Manager Elgin Baylor.

More than 30 years later, Musselman has proven he still has a gift for selling tickets, though this time the product he's promoting is far more attractive than the Clippers of the 1980s.

Going into Musselman's third season as the University of Arkansas coach, the Razorbacks are sold out of season tickets for home games at spacious Walton Arena.

More than 14,500 season tickets have been sold according to an Arkansas spokesman.

Walton Arena has a listed capacity of 19,200, but the season-ticket sales don't include student tickets, an allotment for visiting teams and seating areas for the band and media as well as extra tickets for the suites.

It's the first time season tickets have sold out for the Razorbacks' games since the 2001-02 season.

"I really still can't fathom it," said Arkansas junior forward Connor Vanover, who is from Little Rock. "Growing up being a Razorback fan, to know that every single game we play at home is going to be sold out is great."

When Vanover redshirted during Musselman's first season of 2019-20 after transferring from California, the Razorbacks sold out games against Kentucky, TCU, Mississippi State and Missouri.

"Now we'll probably have that many people for most of the games this year," Vanover said. "It's really exciting to see our program change and be on the rise as we look for bigger and better things ahead."

Fan excitement after Arkansas finished 25-7 last season and reached the NCAA Tournament Elite Eight for the first time since 1995 was an obvious driving force behind the sellouts.

Expectations are also high with Arkansas being ranked in the preseason Associated Press poll -- at No. 16 -- for the first time since the 2007-08 season. The Razorbacks are ranked No. 15 in the preseason USA Today coaches' poll and No. 13 by Blue Ribbon.

"I think the Elite Eight run had a lot to do with it," Musselman said of season tickets selling out. "Hopefully the fans respect our style of play as well."

Winning is the best way to sell tickets, but Musselman has aggressively marketed the program since becoming coach.

"He's a dream from a marketing standpoint," Arkansas Athletic Director Hunter Yurachek said. "He is always pushing things out on social media."

Musselman never misses an opportunity to promote the Razorbacks.

"I do think that our job as a coach is to win games, graduate players, prepare guys for life, and also market," Musselman said. "And our job is to try to help fill buildings."

Musselman learned about marketing from his father, the late Bill Musselman, a longtime college and pro coach in the ABA and NBA.

"I grew up watching my dad sell out Williams Arena," Musselman said of his father's tenure at the University of Minnesota in the early 1970s. "Then they had to closed-circuit TV the games in the hockey arena when men's basketball was playing."

Musselman said he also knew coaching in the CBA for the Rapid City (S.D.) Thrillers that he had to market the team aggressively to sell tickets.

In his first four seasons as a college head coach at Nevada, Musselman's teams also drew sellout crowds to the Lawlor Events Center in Reno.

"You want to try to create a demand for your ticket," Musselman said. "Obviously, if it's a 20,000-seat building, it's a tough thing to do whether you're in college or the NBA.

"So for us to be sold out prior to the end of October, that shows you the excitement we have throughout the entire state."

Musselman said he has talked to the Razorbacks about their responsibility to play entertaining basketball.

"They're student-athletes, but we also understand there's a business aspect to his whole thing," Musselman said. "When you're part of Power 5 programs, there is an obligation to put forth maximum effort at all times.

"Because we understand the money people are spending to come to a basketball game, and the time that they dedicate to try to get to an arena and spend two hours inside watching you perform."

"We want to entertain the fans and get everyone involved so it's more than basketball," Davis said. "You see Coach Muss do it all the time on social media. I think it's a good thing."

Davis wasn't able to play in front of capacity crowds at home last season when attendance was limited to 4,400 because of the coronavirus pandemic.

"I know I'm ready to play in front of the fanbase that everyone knows is one of the best in the country," said Davis, who is from Jacksonville. "I know the guys are ready and we're going to for sure give them the show that they're paying for."

Walton Arena opened for the 1993-94 season, which was perfect timing because the Razorbacks won the national championship and returned to the title game in 1995.

Arkansas continued to sell out Walton Arena for the building's first nine seasons before the program fell on hard times.

The Razorbacks made six NCAA Tournament appearances in an 18-year span from 2002 through 2019 without advancing past the second round.

Which begs the question -- how did Musselman ever sell tickets for the Clippers?

" 'Hello, this is Eric Musselman calling from the LA Clippers. Could I interest you in talking about season tickets?' Click," Musselman said. "I got a lot of hangups.

"But I'm going to tell you the key to being the LA Clippers' account executive of the month for three straight months and I think I was four of five actually.

"Felicia was the receptionist. So all incoming calls, Felicia would direct them to my desk. Felecia was supposed to direct the calls to all 12 account executives in order, '1, 2, 3, 4 ...'

"But I was really smart and learned to become good friends with Felicia so I could get all the incoming calls because when you're selling tickets for a team that's won 12 NBA games, there's not a lot of cold calls that it's going to work for.

"You've got to get those incoming calls because those are people that already have some sort of an interest in ticket sales. And the good thing is, I wasn't on that coaching staff, either, that only won 12 games."

Print Headline: Musselman has Razorbacks back among elite