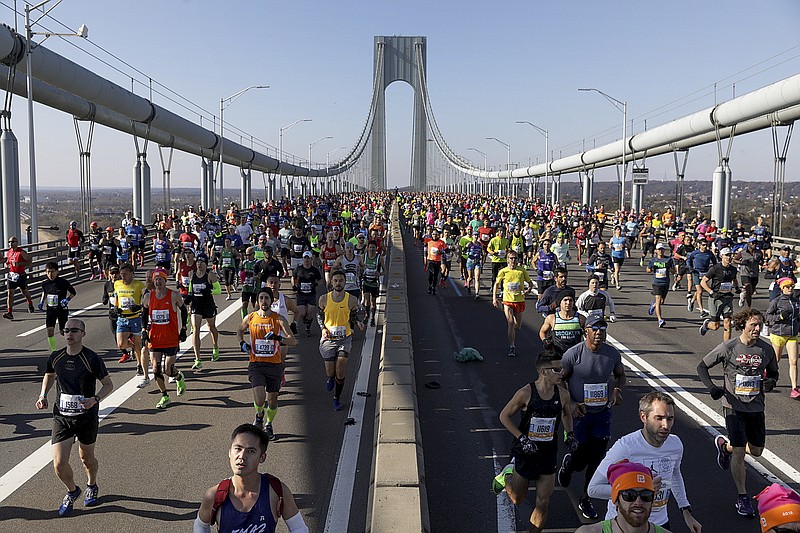 FILE - Runners make their way across the Verrazzano-Narrows Bridge during the start of the New York City Marathon, Sunday, Nov. 3, 2019, in New York. A limited field of 33,000 runners will jog off the Verrazzano Bridge and wind its way toward Central Park on Sunday, Nov. 7, as the New York City Marathon returns for its 50th edition after being wiped out in 2020 by the coronavirus pandemic. (AP Photo/Julius Motal, File)

NEW YORK -- Gary Muhrcke was an amateur when he became the first runner to cross the finish line at a New York City Marathon, and none of the 54 men who followed him were pros, either.

Which isn't to say they weren't serious.

The race's 1970 debut -- staged entirely in Central Park -- hardly resembled the five-borough track that has drawn millions into the Big Apple's streets on the first Sunday of nearly every November since. Adaptation, though, has seemingly always enabled the second oldest of the world's marathon majors to do more of what it does best -- inspire and celebrate.

The 50th edition of the NYC Marathon will certainly test that.

A limited field of 33,000 runners will jog off the Verrazzano Bridge and wind its way toward Central Park today as the 26.2-mile race returns after being wiped out in 2020 by the coronavirus pandemic.

Organizers shrank the field by nearly 40% and are requiring runners be vaccinated or show proof of a negative COVID-19 test within 48 hours of the race. Spectators will be encouraged to maintain social distancing, and some race-adjacent entertainment elements will be scaled back to accommodate that.

The starting format was altered, too, with a fifth wave added to space out runners as they bus or ferry to the starting line in Staten Island and at the finish near 67th Street on the west side of Central Park.

No turning the clock off after four hours this time -- the last group won't take off until noon, four hours after the professional wheelchair division is the first to hit the streets.

"The classic line of, 'We've always done it that way,' that wasn't going to be an option," race director Ted Metellus said.

Over the past 21 months, New York's streets have gone from eerily silent amid a crippling covid-19 outbreak, to filled with heartache and rage as tens of thousands marched following George Floyd's murder, and finally to a steady blossoming of re-openings since spring.

Nothing, though, has brought residents out of their homes en masse for a celebration the way today's marathon is expected to.

Organizers are hoping this year's race impacts the city similarly to the 2001 marathon, when New Yorkers packed the route less than two months after 9/11.

"When I think about this year, I will be excited, I'll be energized," Metellus said. "But I also realize how much it means to everybody else in the city."

Several Olympic medalists will compete in the open division, with the men's and women's champions earning $100,000 each. The most anticipated by fans locally will be Molly Seidel, an American woman who won bronze in the Tokyo Olympics marathon in just her third race at the distance. She was the first U.S. woman to medal since Deena Kastor (Arkansas Razorbacks) won bronze in 2004.

Seidel's medal-winning run was only 13 weeks ago, a short turnaround for marathon runners. Seidel said she was entering Sunday without expectations. Her top competitor, Peres Jepchirchir of Kenya, is coming off the same limited rest after winning gold in Tokyo.

It's a big turn into the spotlight for the 27-year-old Seidel, who has never run a marathon amid this kind of fanfare. Spectators at the 2020 U.S. Olympic trials created energy but not on New York's scale, while the 2020 London Marathon was held behind locked gates at St. James Park. Some locals lined the streets for the Olympic marathon in Sapporo, Japan, but Seidel said "it was very low key, a lot of like, golf clapping."

Her family also will be able to watch her race in person for the first time since the U.S. trials.

"I'm looking forward to the crowds, getting to have that energy again," she said. "And I don't know, I mean, this is my dream job, every time I get to go out and do a marathon."

Kenenisa Bekele of Ethiopia is the headliner for the men's race. The four-time Olympic champion is among the most decorated distance runners ever, and at 39, he might be running his last race on U.S. soil.

The top American in the men's field should be Ben True, a six-time national champion at other distances who is making his marathon debut.

American Daniel Romanchuk is seeking a third straight victory in the men's wheelchair race, while former champs Manuela Schär of Switzerland and Tatyana McFadden of the U.S. lead the women's wheelchair division.

There will be some gold medals in the non-competitive waves, too: U.S. women's national soccer team alumni Abby Wambach, Lauren Holiday, Kate Markgraf and Leslie Osborne are among the celebrities running this year.

Former New York Giants running back Tiki Barber is racing for the seventh time, while two members of British rock band Mumford & Sons are running NYC for the first time. Tony Award-winning actress Kelli O'Hara will perform the national anthem and then hit the course, and former contestants on "The Bachelor" and "The Bachelorette" Matt James, Tyler Cameron, Tayshia Adams and Zac Clark are also participating. 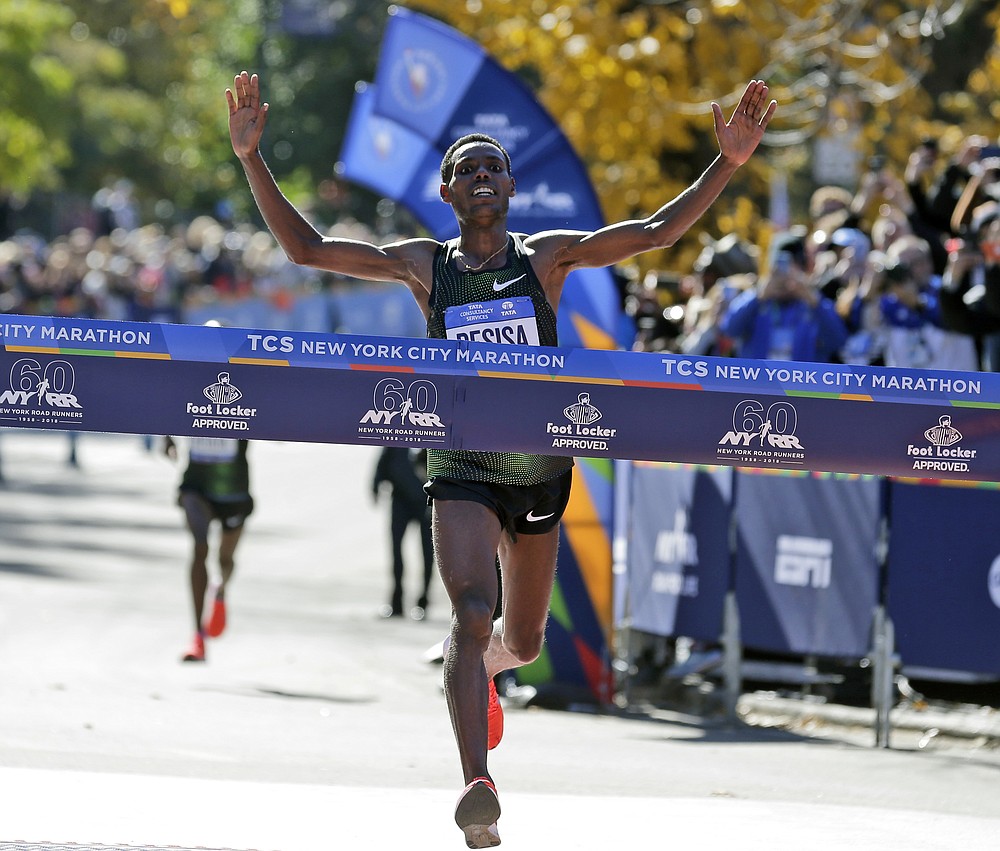 FILE - Lelisa Desisa, of Ethiopia, crosses the finish line first in the men's division of the New York City Marathon, Nov. 4, 2018. A limited field of 33,000 runners will jog off the Verrazzano Bridge and wind its way toward Central Park on Sunday as the New York City Marathon returns for its 50th edition after being wiped out in 2020 by the coronavirus pandemic. (AP Photo/Seth Wenig, File) 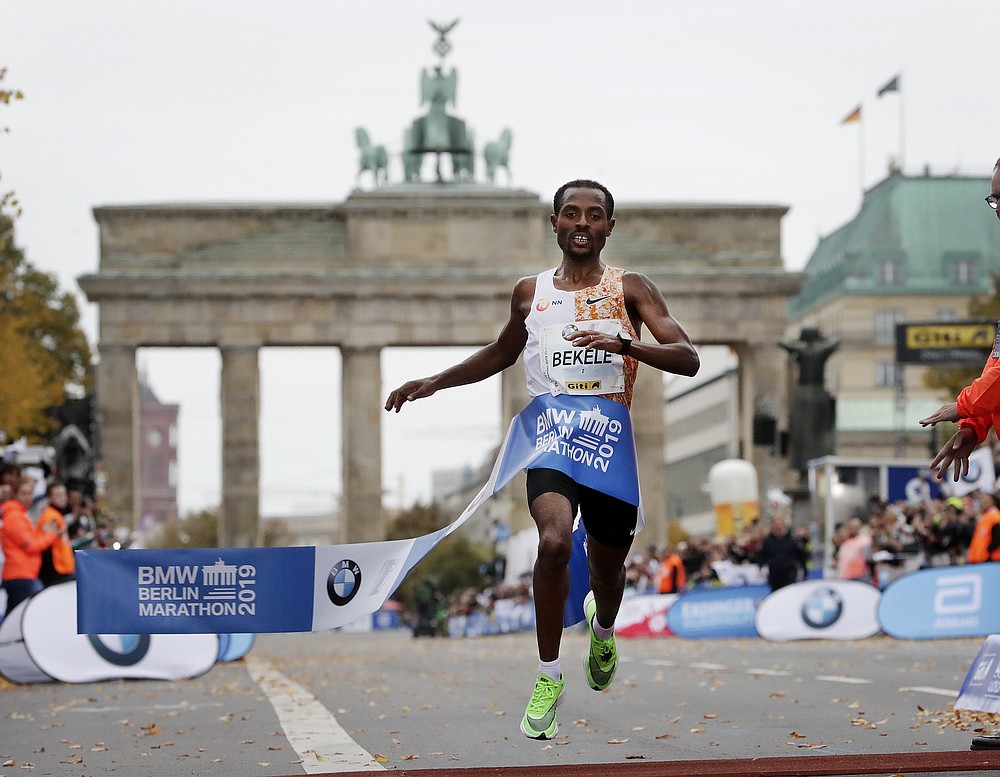 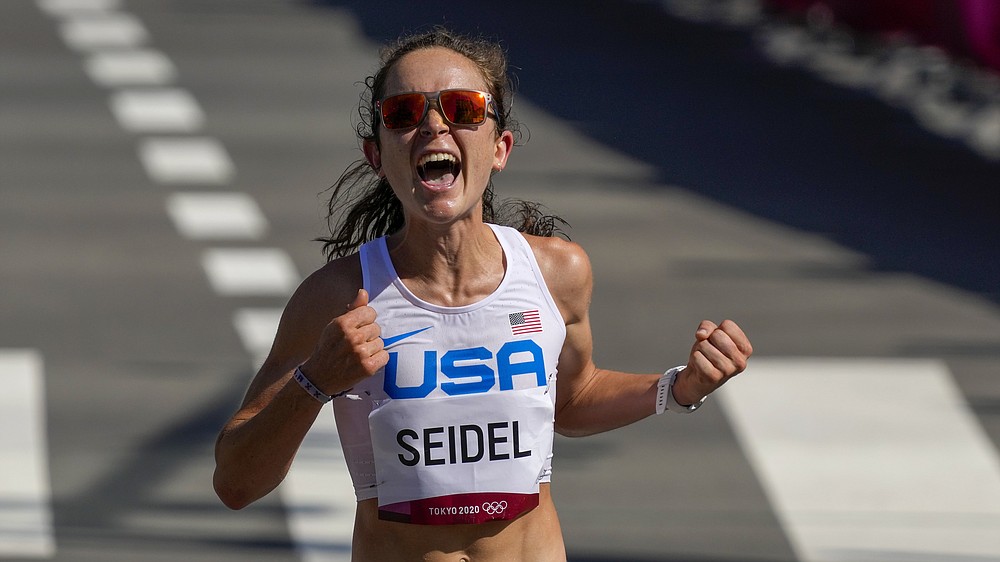 FILE - Molly Seidel, of the United States, celebrates as she crosses the finish line to win the bronze medal in the women's marathon at the 2020 Summer Olympics, Saturday, Aug. 7, 2021, in Sapporo, Japan. Several Olympic medalists will compete in the 50th edition of the New York Marathon on Sunday, Nov. 7, 2021. The most anticipated by fans locally will be Molly Seidel. (AP Photo/Shuji Kajiyama, File) 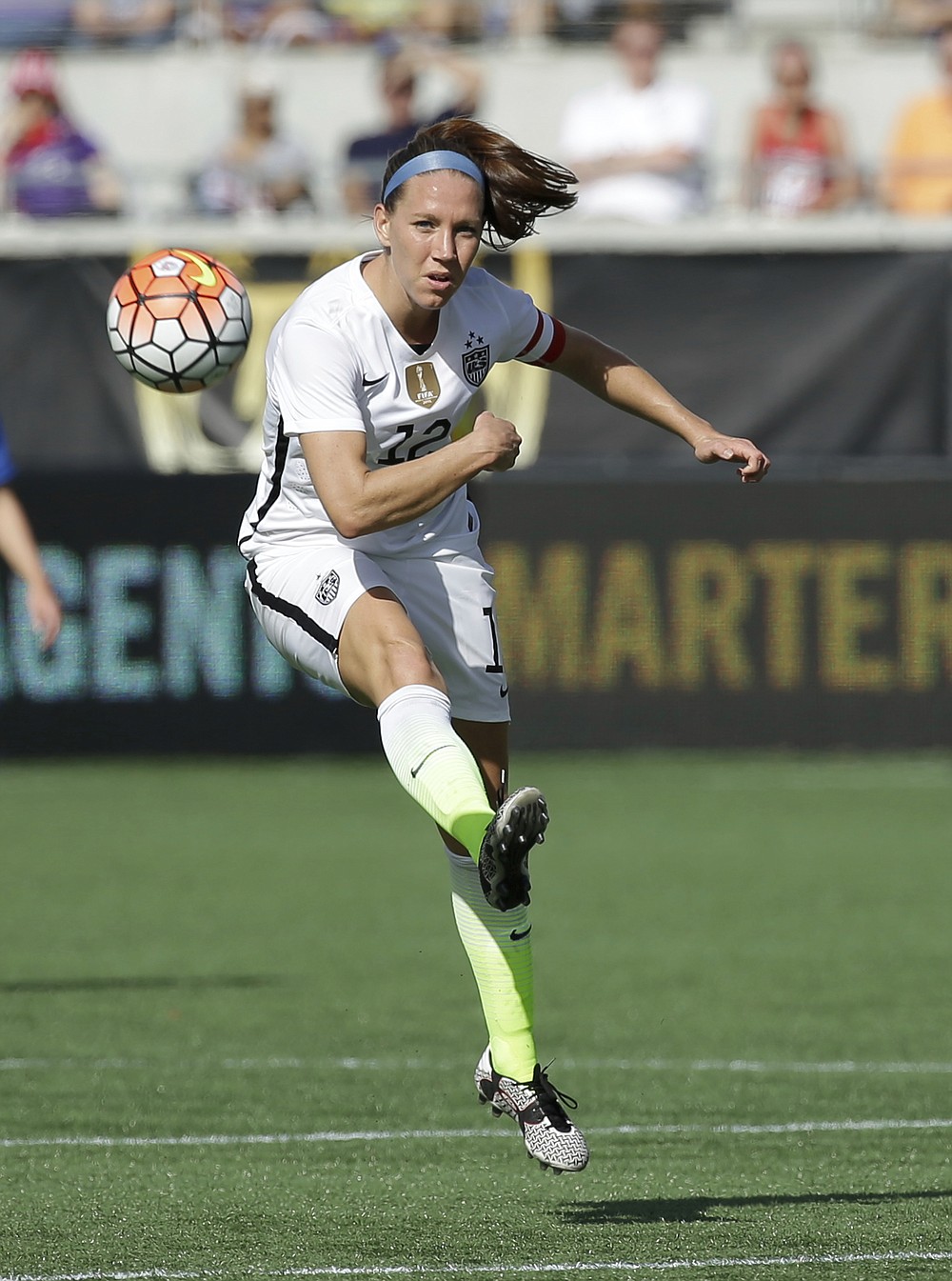 FILE - United States midfielder Lauren Holiday moves the ball against Brazil during the first half of an international friendly soccer match Sunday, Oct. 25, 2015, in Orlando, Fla. Holiday is expected to run in the 50th edition of the New York City Marathon on Sunday, Nov. 7, 2021. (AP Photo/John Raoux, File)