No travel required to get married in Utah -- virtually 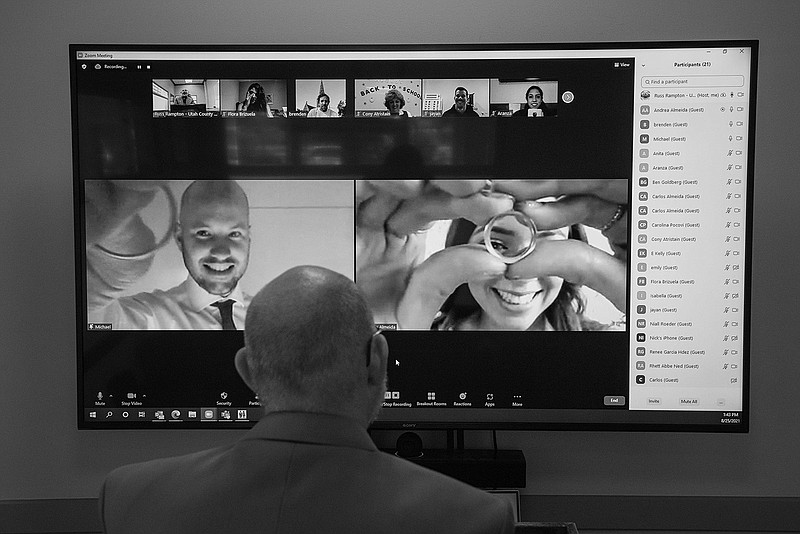 Russ Hampton officiates the wedding ceremony of Andrea Almeida (right) in Mexico and Michael Kelly in Australia at the Utah County clerk’s office in Provo, Utah, on Aug. 25. Thousands of international couples, separated by covid-19 travel restrictions, have found a surprising lifeboat in Provo where the wedding process has been fully virtualized. (The New York Times/Russel Daniels)

PROVO, Utah -- Five days a week, in a small beige room in a plain office building here, couples all over the world are granted a golden ticket: the ability to reunite after being separated by covid-19 travel restrictions, in some cases for more than a year and a half.

And to get it, they don't even have to set foot in the room.

Since May 2020, the Utah County clerk and auditor's office in Provo has performed virtual weddings for more than 3,500 international couples, including brides and grooms from Azerbaijan, China, Estonia, Finland, Denmark, France, Guam, Iceland, Kenya and Madagascar.

"We have become an international marriage venue completely by accident," said Burt Harvey, who oversees marriage licenses at the clerk's office. "But we're leaning into it."

On a Friday in early August, Jessica Alexander and Lukas Steyer came to the county clerk's office via Zoom -- she from Jupiter, Fla., and he from Burgstadt, Germany -- for their civil ceremony.

They connected online in 2020: Steyer is a social media personality who goes by the name Gaming Grizzly, and Alexander, a sales executive for Zillow, has daughters who watch his gaming videos on YouTube. They started dating late last year but have never met in person.

"Both of you are fires, and that's important because everywhere you go, you leave a little mark," Frei began. Muffled sounds came from some of the guests' videos. Frei paused to mute them, then spoke for about 15 minutes -- on good and bad fires, the importance of date nights, love languages and "cleaving together."

He called repeatedly on "Sebastian." As it turned out, Steyer was using his uncle Sebastian's Zoom login. There was a brief correction, then the ceremony resumed.

Once Frei concluded his speech, Alexander and Steyer exchanged vows. "This pandemic has kept us apart, but it has also given us the time to learn about each other and to build a solid foundation for the rest of our lives," the bride said. "I have learned so much through your love for me, and if there's one thing I'm certain of in life, it's you."

Alexander slid a ring on her finger, Steyer slid one on his, and Frei pronounced them "legally and lawfully married." To mark the moment, he suggested a "covid air hug"; the bride and groom symbolically held each other across nearly 4,800 miles.

For couples like Alexander and Steyer, the virtual marriage process offered by Utah County has been a lifeboat in the midst of the pandemic, which caused many countries to close their borders to noncitizens in March 2020. Though travel restrictions have shifted and evolved since then, the United States currently bans entry to most travelers from China, Iran, Brazil, India, Britain, the Republic of Ireland, South Africa and much of Europe.

"Couples have been separated going on two years," said Rosanna Berardi, who has practiced immigration law for 25 years and owns a law firm in Buffalo, N.Y. She described covid-19 and its restrictions on immigration as the cause of "the biggest disaster I've seen in my career."

Amid the crisis, Utah County has emerged as an unlikely stopgap.

Right now, an obvious incentive to marry -- aside from affirming the love two people feel for each other -- is the ability to bypass travel restrictions. A marriage certificate enables partners to apply for visas and to cross borders even when they're closed to most visitors.

While several U.S. states have allowed local couples to file application paperwork and even marry online, Utah County went further. After making the entire marriage process virtual, from the license application to the ceremony, the county clerk started accepting applications from couples in different states -- and soon, different countries. Only the officiant needed to be in Utah.

"Word got out really quick," said Joshua Daniels, the clerk and auditor of Utah County, who was elected to the post in the spring.

Members of groups like Love Is Not Tourism, who share advice on cross-border relationships, spread the news. Private wedding officiants, such as Web Wed, caught on and began shuttling clients -- virtually -- to Utah County, Daniels said.

"Love knows no bounds, whether geographic or otherwise," Daniels said. "We're making it possible for couples to come together despite circumstances that might keep them physically apart."

Hundreds of couples from Israel have used the service because civil marriages are not performed in that country. Before the pandemic, same-sex couples, couples of mixed backgrounds and couples in which one or both people could not prove they were Jewish would travel outside Israel to wed and register the marriage in Israel afterward.

Once borders were closed, some couples tried marrying aboard boats far enough from land to be considered outside Israel's territory. "It's not a pleasant experience, but it's legal," said Vlad Finkelshtein, whose law firm works with Utah County to wed Israeli citizens.

The Interior Ministry in Israel is not recognizing marriages performed through Utah County's virtual system, but Finkelshtein and his clients have challenged the decision in court.

"This is the perfect case study on how technology can help promote basic human rights," the lawyer said.

IN THE EYES OF THE LAW

For the most part, countries around the world recognize the legality of marriages performed abroad. But international couples using the virtual marriage system in Utah County have run into challenges.

Destini and Mark Lowrie met on Chatroulette in 2013. He lived in Royal Tunbridge Wells, England, and she lived in Graham, Texas, so they talked often on Skype but never met in person.

Last year, something changed. "We started talking more seriously," said Destini Lowrie, who changed her last name from Searcy. "I always had a thing for him, but it always seemed like an unfeasible relationship."

Last November, she flew to England. When she returned to Texas 2 ½ months later, she was pregnant and engaged. When Mark Lowrie tried to visit her, he was turned away at the airport. After a few months of panicked research, they wed virtually in Utah County.

After the Zoom wedding, Lowrie went to the airport in England again and was turned away a second time; immigration officials said his marriage was not valid because he and Destini Lowrie had not consummated it, since they had not been together physically after the marriage. Destini Lowrie had to call the U.S. Embassy in Britain and beg for a National Interest Exception for her husband. The embassy granted it a few days later.

Finally, Mark Lowrie arrived in Texas on Aug. 2, exactly a week before his and Destini Lowrie's son was born.

When it comes to entering the United States, federal immigration law trumps state law. According to the Immigration and Nationality Act, Zoom ceremonies performed by Utah County in which the bride and groom are not physically together are considered "proxy marriages."

Under federal immigration laws in the United States, a proxy marriage is not considered legitimate until it is consummated, as old-fashioned as that might sound. Even though marriages performed on Zoom in Utah are legal, they are seen as illegitimate in the eyes of immigration officials. This presents a problem for couples who are living in different countries and cannot meet in person to consummate the marriage because of covid-related travel restrictions.

"They would have to find a location that allows both Americans and foreign nationals to enter unrestricted," said Berardi, the immigration lawyer in Buffalo. Then, "the couple needs to prepare an affidavit stating the date and location of the consummation."

As for virtual consummation? "Phone sex doesn't count," said Susie Kim, who specializes in immigration and nationality law in New York. "Immigration law is ever-changing, but it hasn't caught up to that yet."

According to Hendrik Hartog, a professor of the history of American law at Princeton University, under state laws, consummation has not been a formal requirement of a valid marriage for about 200 years.

Challenges notwithstanding, Daniels does not expect a dip in application numbers anytime soon. "It's a service that's very useful for certain people in certain situations," he said. "I don't see it going away."

Print Headline: No travel required to get married in Utah -- virtually