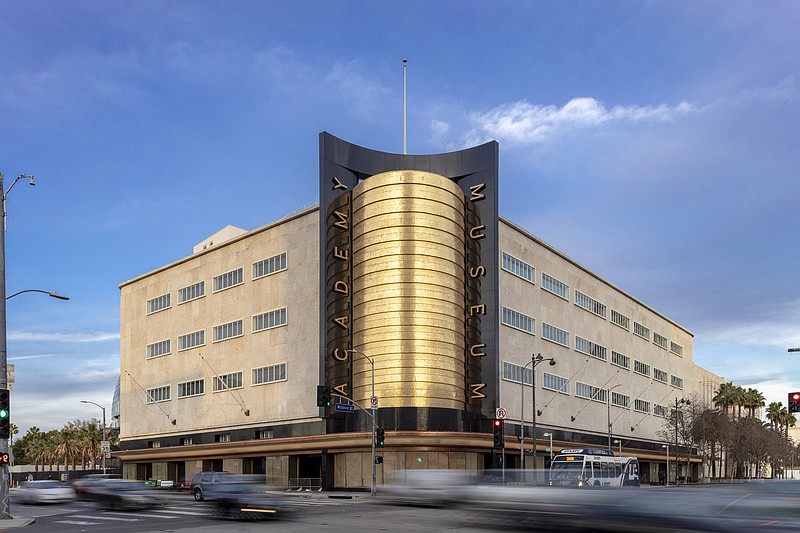 The long-anticipated Academy Museum of Motion Pictures, located in the former May Company department store building at Wilshire Boulevard and Fairfax Avenue in Los Angeles, opened in September after delays caused by the pandemic. (JWPictures/Academy Museum Foundation/Josh White)

Not to brag, but I recently received an Academy Award.

As I took the stage, that wonderfully schmaltzy Oscars music began to play and a giant chyron with the words "And the Oscar goes to ... " appeared on a movie screen in front of me. My name flashed onto the screen, the music swelled and an audience in evening wear gave me a standing ovation. I took the heavy statuette in my hand and, wouldn't you know it, flubbed my acceptance speech, even though my win was a sure thing.

Full disclosure: This happened at the newly opened Academy Museum of Motion Pictures in Los Angeles. A well done, if slightly gimmicky, feature of the long-anticipated new museum is called "The Oscars Experience." For an extra $15, visitors get the virtual experience of winning their own Academy Award. It's not the kind of thing I usually go for, but during a recent visit, I adopted a "When in Tinseltown" attitude and scheduled myself for a midday Oscar win. After typing my name and email address into a computer (the email is so they can send you a video later), I took my place "backstage" and waited as ambient audience sounds played, complete with random coughing.

An enthusiastic museum attendant appeared to offer statistics about the statue's weight (8 ½ pounds) and to explain that the one I would be holding was made by the same factory that makes the real Oscars. Although I had to keep my mask on, she politely warned, I could put my purse down while I made my acceptance speech. As I took the stage, she congratulated me on my nomination, a strange and effective detail that made it — almost — feel real. All in all, it was a pretty good deal: I didn't have to get tricked out in borrowed finery, face the wrath of the screenwriter I forgot to thank or show up for the Vanity Fair after-party.

I should confess here that I headed to the museum with a chip on my shoulder. I had received a donation appeal in the mail — presumably along with thousands of other Angelenos — in the months before the museum's opening. I'm well aware of how hard arts organizations have to hustle for funding, but given the otherworldly collective wealth of the people and corporations who make up the supporters of this particular museum (names such as Winfrey, Hanks and Spielberg are but a few), mine seemed like an odd and inappropriate well from which to attempt to draw. Add to that the fact that a museum dedicated to the Oscars seemed like a way to celebrate the already celebrated — talk about meta.

The museum, which opened to the public in late September after protracted pandemic-related delays, is housed in the former May Company department store at Wilshire Boulevard and Fairfax Avenue in Los Angeles.

The striking building, completed in 1939, is considered a superlative example of Streamline Moderne architecture. But while the exterior retains its late-Deco appeal — the facade's signature gold-and-black cylinder was painstakingly restored as part of a multimillion-dollar renovation — whatever period charm the interior of this once-bustling department store might have had is gone.

The vast Sidney L. Poitier lobby, dotted with CVS-red pouf-style seating, doesn't exactly evoke the glamour of Old Hollywood. Only the decor of Fanny's, the main-floor restaurant named for vaudeville and film star Fanny Brice, seems to draw inspiration from the building's past.

Aesthetics aside, the main building's seven floors of multiple galleries are neatly laid out and easy to navigate. Devoted to nearly every aspect of filmmaking — such as writing, equipment and makeup — the galleries offer a staggeringly comprehensive view of the mechanics, history and sheer magic of the art.

The scope is not surprising, given that the Academy has a virtually unquantifiable number of objects from which to draw.

Although just a small fraction of its collection is displayed here, the organization owns more than 13 million photographs, 71,000 screenplays and 67,000 film posters, among many, many other objects.

All of which is to say: If you're looking for the actual Rosebud sled from "Citizen Kane," you've come to the right place.

I overheard a fellow visitor remark that it would take at least a week to really see everything on view, but I think that estimate is optimistic. I spent hours at the museum and still didn't see everything I had hoped to view. Back home, for example, a frustrating inspection of my photos revealed that I somehow walked right by a copy of the "To Kill a Mockingbird" script scrawled with Gregory Peck's handwritten notes.

Just north of the main building is an ostentatious spherical behemoth that houses the 1,000-seat David Geffen Theater and a second, smaller theater. Designed, like the main museum's interior, by Italian architect Renzo Piano, its exterior stairwell and connecting skyways instantly put me in mind of a launchpad at Cape Canaveral, Fla.

That said, the view from the Insta-perfect Dolby Family Terrace, a semi-open platform on the roof, connected to the museum via the Barbra Streisand Bridge, is exceptional. 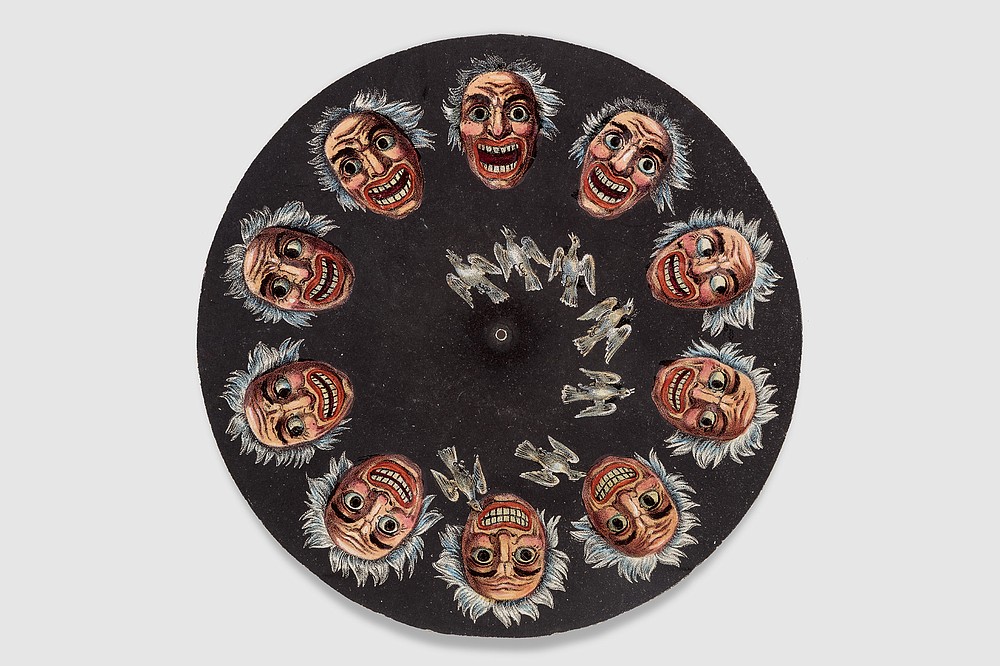 The Academy Museum of Motion Pictures’ exhibits include items such as phenakistoscopes, discs that, when spun, create the illusion that a drawing is moving. (JWPictures/Academy Museum Foundation/Josh White)

THE PATH TO CINEMA

Of all the core exhibits, I found "The Path to Cinema: Highlights from the Richard Balzer Collection" the most affecting. The compendium of objects that explore the prehistory of cinema left me marveling at the fact that anyone ever thought moving pictures were a possibility. Included in the collection are shadow puppets, optical toys and phenakistoscopes, discs that, when spun, create the illusion that a drawing is moving.

Particularly exciting was a group of nine vues d'optique, detailed engravings perforated with small holes that come to life when lit from behind.

During my visit, there was an audible gasp when the main lights on the display were dimmed and small beams of light pierced the holes in the pictures.

In the same gallery, a compilation of short film clips by French brothers Auguste and Louis Lumiere also elicited rapt attention. According to the exhibition materials, the films, dating from 1895, were a vehicle for showing off the brothers' Cinematographe Lumiere, a projector thought to be the best of its time. Although the short clips of everyday life are almost disarmingly poignant, it was a quotation projected onto the wall that made chills go up my spine.

From a French newspaper of the era, the prescient, if somewhat hyperbolic, declaration from 1895 reads: "When these devices will be available to the public, when people will be able to capture their loved ones, not still anymore but in motion, in action, in their ordinary movements, with their own words, death will cease to be absolute."

Also of special interest are core exhibits that showcase the unsung aspects of moviemaking. One of them, "Backdrop: An Invisible Art," features the backdrop of Mount Rushmore used in Alfred Hitchcock's 1959 classic, "North by Northwest," one of my favorite films. I remember it as the first movie that instilled true fear in me; it was a thrill to see such a central component of the film up close.

The museum's inaugural temporary exhibit, on view through summer 2022, is a tribute to Japanese animator Hayao Miyazaki, whose films include "My Neighbor Totoro" and "Spirited Away."

The comprehensive retrospective includes Miyazaki's desk, his breathtaking watercolor renderings and poems he wrote for the animation teams on various films to express the atmosphere he was trying to convey. It left me with a strong appreciation of not only his skill, but also his filmmaking philosophy. A temporary show, "Regeneration: Black Cinema 1898-1971," is set to follow the Miyazaki exhibit next year.

Of course, an Academy of Motion Picture Arts and Sciences museum without a tribute to the Academy Awards would be like a van Gogh museum without sunflowers, and indeed, there is a substantial section that pays tribute to the Oscars. In addition to memorabilia, such as ceremony programs, congratulatory telegrams to and from a who's who of moviedom's heavy hitters, and the feathered and sequined Bob Mackie dress Cher wore to the 1986 Oscars ceremony, looped acceptance speeches play on screens that surround the room. It's clear here that an effort has been made to show a diverse population of winners.

The same is true of the museum as a whole; its website lists "Be Radically Inclusive" as one of its guiding principles. And although its determination to showcase the work of traditionally underrepresented artists is admirable, one has to wonder whether it's not also an effort to counterbalance the industry's and the Academy's notoriously poor record of inclusivity, which led to #OscarsSoWhite and other protest campaigns. (The industry is no stranger to controversy: As this story went to press, the tragic accident on the set of the Alec Baldwin film "Rust" prompted renewed calls for the discontinuation of prop gun use on film sets.)

Did my visit have a Hollywood ending? It came pretty close. I still can't pretend to like the buildings, but I warmed to the institution. Though predictably reverential, the exhibits were also thoughtful and provocative. More importantly, the museum was less about the Oscars and ego than about the art of moviemaking. I witnessed the magic of the latter in the gallery devoted to "The Wizard of Oz." A tall, young woman who seemed to be in her mid-20s stood silently while inspecting a pair of Judy Garland's iconic ruby slippers displayed in a glass case. Waiting in an informal line so I could see them myself, I saw her click her heels three times before moving on. 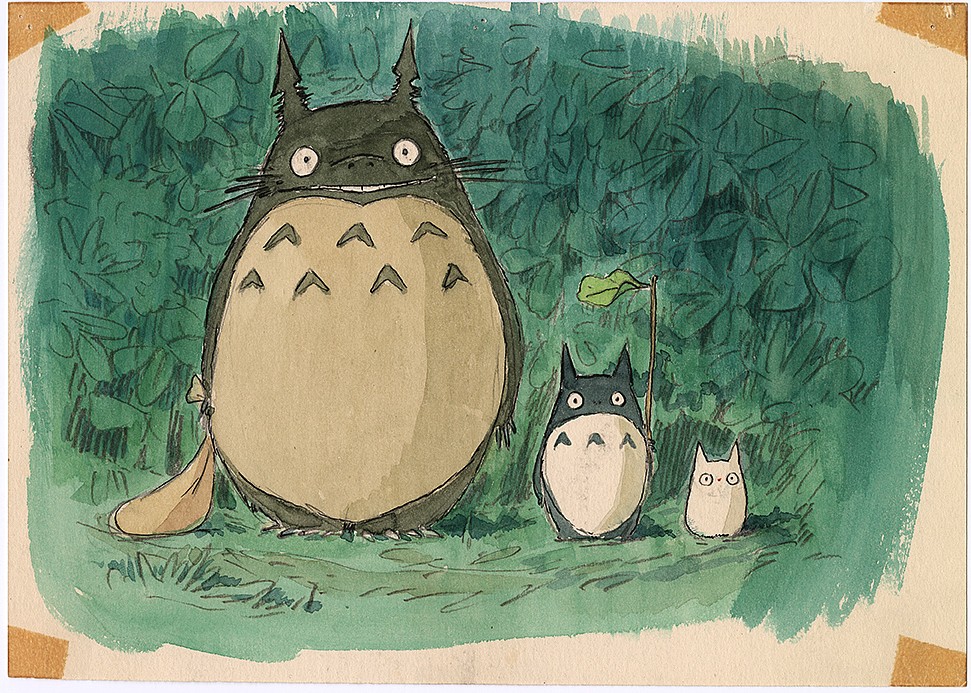 This imageboard is from Hayao Miyazaki’s beloved 1988 film “My Neighbor Totoro.” The new museum’s inaugural temporary exhibit is a salute to the Japanese animation master. (Courtesy of Studio Ghibli)

This Los Angeles museum pays tribute to the art and history of filmmaking. The exhibit "Hayao Miyazaki" is on view through June 5. Galleries are open daily 10 a.m.-6 p.m. Sunday-Thursday and until 8 p.m. Friday and Saturday. General admission: $25 adults; $19 senior citizens 62 and over; $15 college students and free for those 17 and under. The Oscars Experience is an additional $15. Advance reservations must be made online. There are additional costs for screenings. There is no parking at the museum, but visitors can park at surrounding museums, including nearby Los Angeles County Museum of Art; LACMA parking $18.