OPINION | ON BOOKS: 'The Storyteller' a glimpse at Grohl 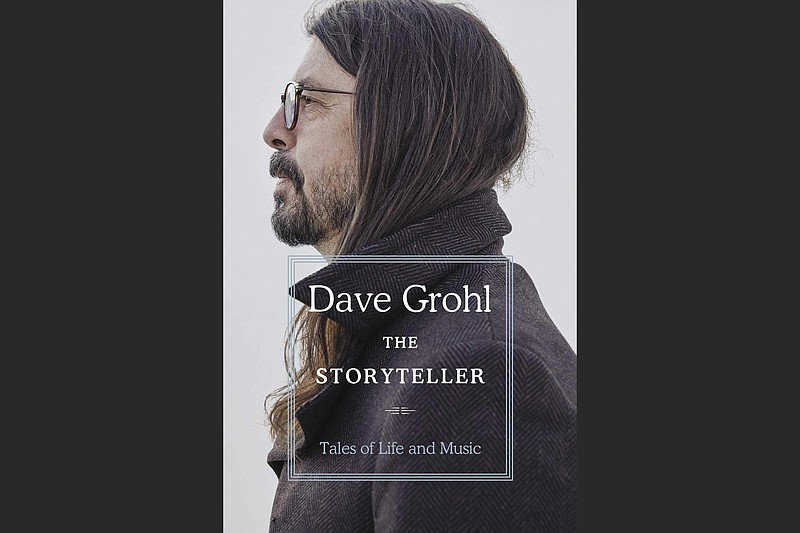 I lamented to a friend that I had once again gotten sidetracked off my serious programmatic reading. I had picked up the autobiography of rock star Dave Grohl, "The Storyteller: Tales of Life and Music" (Dey Street Books, $29.99), and fallen deep into it.

My friend raised an eyebrow. Was that the rocker involved in some vague scandal she had heard about? Maybe a #Metoo situation?

I panicked for a moment. All of us have blind spots, areas of incomplete knowledge. I never know who's dating who or what the latest celebrity outrage is. All I knew about Grohl was that he used to be the drummer in Nirvana, he was the chief songwriter and front man of Foo Fighters, and that he presented as an amiable goof who genuinely loves his work and understands exactly how lucky he is to occupy the place he occupies in our culture.

Oh, he played Satan in 2006's "Tenacious D in the Pick of Destiny." And he directed the excellent 2013 documentary "Sound City."

I had no idea there was any controversy about him.

So I started Googling. If I was going to write about his book — and "The Storyteller" had hijacked enough of my time that I was compelled to either write about it or have this column go black for a week — I had to at least take note of the allegedly dark side of Dave Grohl.

All I found were a couple of mentions of a tweet that Courtney Love had posted — then retracted — that vaguely alleged Grohl was "abusive" during business negotiations over Nirvana royalties. (She was, you will remember, married to the late Nirvana frontman Kurt Cobain.) Maybe Love will have more to say about this in the future. All I can report is that Grohl doesn't have anything bad to say about Love in his book. Or anything bad about Cobain either, though Grohl had never known anyone who had used heroin before.

In fact, Grohl has hardly anything bad to say about anybody. This isn't a dirt-dishing tell-all, the cold revenge of a misfit who made it despite everybody telling him he couldn't. This really isn't much of an autobiography — if you're looking for research paper facts, you can glean a lot more from the detailed Wikipedia entry on Grohl than this book.

He barely mentions his first wife, spending more time on his ill-fated cross-country trip to visit the Dallas-area strip club owned by metal band Pantera. After taking a 200-mile detour to visit the club, Grohl was refused entrance because he had left his wallet at a gas station in Barstow, Calif. When he told the bouncer he was friends with the band, the unsympathetic doorman told him "everybody is friends with Pantera."

Grohl got his wallet back decades later, after a chance meeting in Los Angeles with the son of the couple who owned the gas station. They'd held onto it for all those years. Grohl does not report whether they knew the wallet belonged to a celebrity. He seems, in print at least, very unlikely to pull the "Do you know who I am?" card.

He always seems surprised when people do, whether it's George W. Bush "hey, dude"-ing him in a White House hallway, or Paul McCartney, or Dime­bag Darrell (though that still didn't get him into the club).

The result is an uneven but highly likable book that, as the title suggests, is episodic and anecdotal while not being terribly revealing. The members of Foo Fighters (which started with Grohl playing all the instruments but was never intended as a solo project) keep changing, and we might wonder if there isn't some interesting material that Grohl is avoiding, and I for one would like to have read even more about Grohl's pre-Nirvana apprenticeship (he talks about his single drum lesson but doesn't mention his early guitar education).

We glean that he grew up in suburban Virginia, not far from Washington, and that his mother — who remains his best friend — was a remarkably empathetic and emotionally intelligent parent. Grohl made up with his absent father before he died, and seems not to have sustained any deep childhood trauma. He does, however, seem to injure himself regularly, sometimes in stupid ways, like leaping off a 12-foot-high stage.

In what feels like a Second City skit, Grohl encounters a serious drug problem: He's a caffeine abuser who once had a five-pots-of-coffee habit a day (in between java fixes, he'd drink strong tea). This led to a health scare, which, while no doubt very real to Grohl and his family, is hardly "Jo Jo Dancer, Your Life Is Calling."

I guess one could question what the purpose of this book is beyond further enriching Grohl, who is already the third-richest drummer on the planet (behind Ringo Starr and Phil Collins). But I liked the book enough to keep reading it, even when I knew it was not going to offer any bombshell revelations or give me much insight into how Nirvana or Foo Fighters operate.

Grohl emerges as a lucky kid who early on discovered he loved the carnival and was lucky (and talented — he doesn't talk about himself this way but his gifts are enormous) to make a living at it. I'll bet he's a sweet man who loves his family and would be cool to hang around with.

Most of us will never get to do that. But this book might give us the flavor.