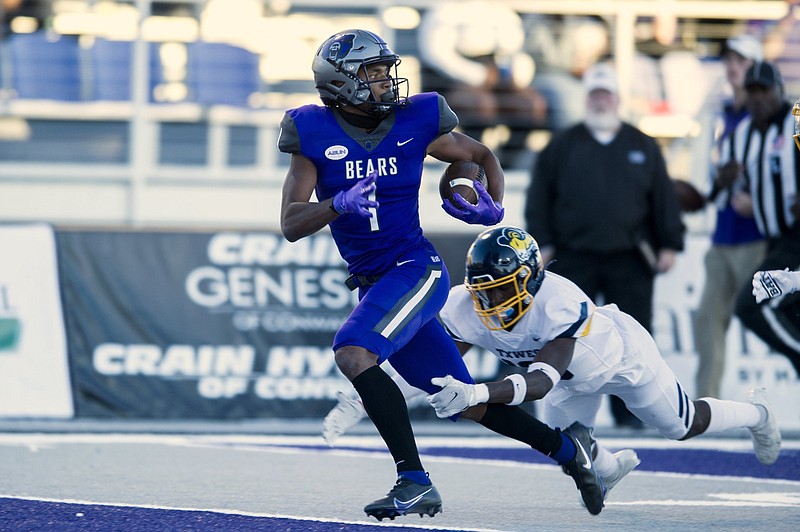 CONWAY -- The University of Central Arkansas football team walked off the field at Estes Stadium on Saturday with a full game under the belt -- but it was only halftime.

With 538 yards of offense, the Bears had already posted 49 points. Quarterback Breylin Smith had 410 yards passing and 5 touchdowns. Receiver Tyler Hudson had 2 scores and 178 yards on 5 catches. And running back Darius Hale had 88 yards and 2 touchdowns.

In dominating, record-setting fashion, UCA took care of NAIA opponent Texas Wesleyan by the tune of 63-3 to go above .500 for the first time this season.

"We played clean football," UCA Coach Nathan Brown said. "I think that's the most important thing when you go into a game like this, [that] you play clean football. We didn't turn the ball over. We were efficient when we had the football. Defensively, we didn't give up any big plays until ... the fourth-quarter play.

"It was a total, dominating effort, and that's the way it should have been."

UCA (5-4) finished with 664 yards on offense, the program's fourth-best single-game total ever. Its 11.3 yards per play also broke a single-game team record, which was set against Henderson State in 2001.

Hudson's 178 receiving yards didn't set any single-game records, but on his first catch -- a 93-yard touchdown -- the junior broke the program record for career receiving yards. The record was previously set by Desmond Smith, who played at UCA from 2013-16. Smith finished his career with 2,828 yards. Hudson currently sits at 2,985 yards.

"I came in ... freshman year thinking I was going to break every record that I could whenever I finished here," Hudson said. "So, to be able to accomplish this one already, it's kind of motivating for me to go and break some other records."

Smith's night, which wrapped up in one half, was his most efficient of the season. He averaged 31.5 yards per completion and had a quarterback rating of 376.1.

Senior receiver Lujuan Winningham finished with two catches for 97 yards and a touchdown. Although, on his 80-yard touchdown reception, Winningham appeared to slow up with a leg injury.

Brown said Winningham is in a boot as a precautionary measure, and that it appears the senior rolled his ankle. Brown feels good about Winningham's status for next week's game against Stephen F. Austin, he said.

The Bears limited Texas Wesleyan (6-3) to 150 yards of total offense. The Rams ran 27 times and finished with 3 yards. UCA also had two interceptions off two different quarterbacks -- first Carson Rogers and then Dalton Dale. It was able to create 14 points off those turnovers.

Part of the reason UCA generated so many yards was because of an impressive performance from Texas Wesleyan punter Daniel Trejo.

Trejo punted eight times and averaged 49.2 yards per attempt. Seven of his punts were downed inside the 20-yard line and none resulted in a touchback. He also scored the Rams' lone points on a 24-yard field goal in the fourth quarter.

Several younger Bears also got playing time in the second half, including freshmen Darius Bowers and Hunter Lloyd, who both got time at quarterback and finished a combined 4 of 4 for 62 yards and a touchdown. Bowers and running back Corbin Humphrey both ran for 23 yards, and Humphrey scored one of the Bears' two second-half touchdowns.