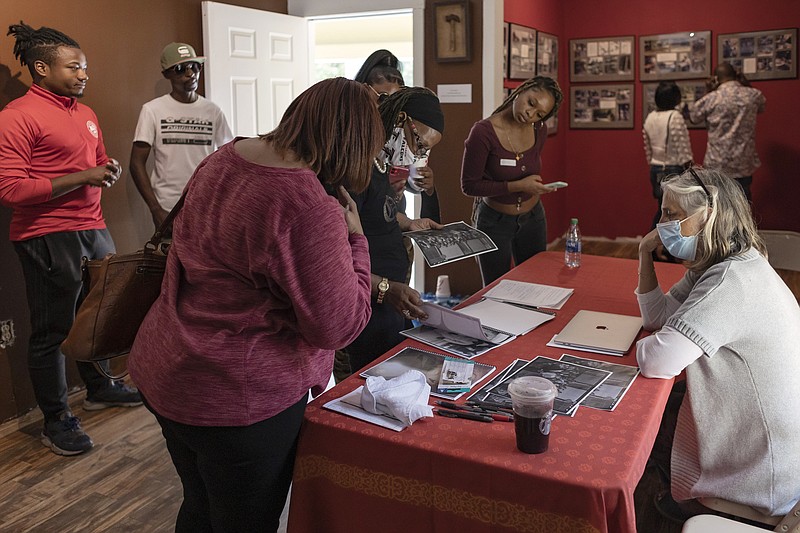 Visitors explore the exhibits and artifacts on display at the Greene County African American Museum during its grand opening in Greene County, Ga., on Oct. 16. After more than 20 years of planning, Mamie Hillman completed a lifelong passion and opened a Black museum in Greene County. (AP/Athens Banner-Herald/Kayla Renie)

GREENSBORO, Ga. — After more than 20 years of planning, Mamie Hillman completed a lifelong passion and opened a Black-history museum in Greene County.

Opening day for the Greene County African American Museum in Greensboro on Oct. 16 marked a joyous occasion for all in attendance. But for Hillman, it was the first step in encapsulating the long-overlooked history of Black leaders in Greene County.

"It all goes back to when I was a child growing up in White Plains," said Hillman, executive director of the museum. "I always wanted to know — how did I enter into history?"

Growing up in a segregated school setting, there were very few resources and only the white community had access to a public library. But teachers at her school worked to ensure students saw that Black leaders were making a difference, Hillman said.

"I just wanted to feel ownership in my community," she said. "As I got older, became an adult and had a family, I started investigating."

Her curiosity led her to read Jonathan Bryant's "How Curious a Land," which detailed the history of the Civil War and Reconstruction in Greene County. The book introduced her to Abram Colby, one of the first Black people to serve as a Georgia state senator after Emancipation.

"I found myself in that book through the life of Abram Colby," she said, adding that his story was empowering.

Her family first came up with the idea for a museum due to what they felt was a lack of culture-minded activities in the community.

"You have to go into Atlanta for everything, whether it's music or shows," Hillman said. "If we had a building, we could do that ourselves." 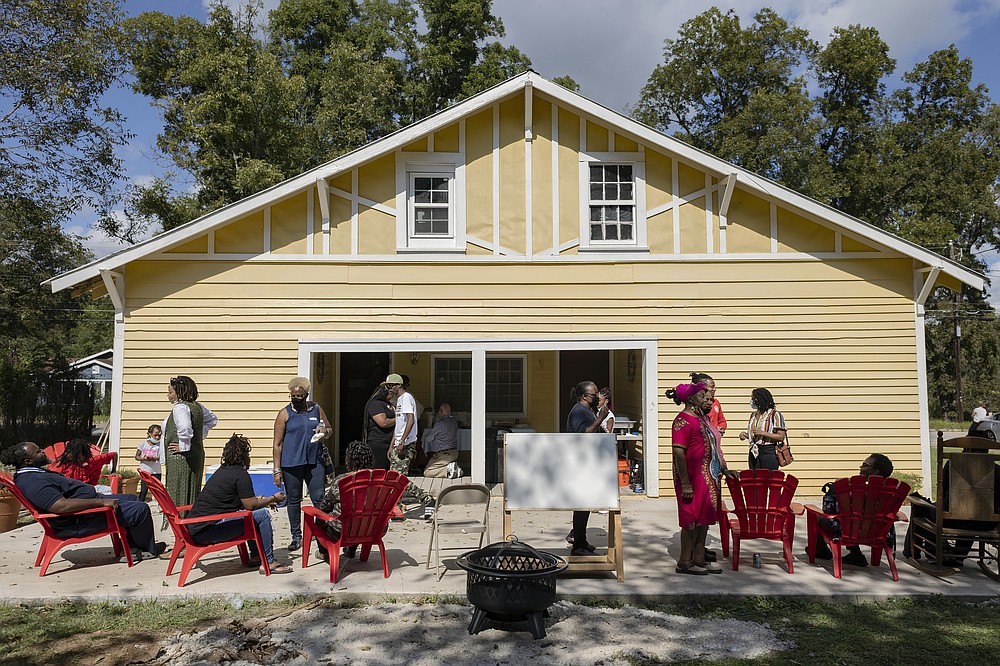 Visitors gather for storytelling, drumming, music and food at the Greene County African American Museum during its grand-opening in Greene County, Ga., on Oct. 16. (Athens Banner-Herald/Kayla Renie via AP)

Now, she hopes the museum in Greensboro can serve as a resource for those hoping to learn about Black history and to commemorate forgotten Black leaders in Greene County.

"Even though we're living in 2021, some things are still happening, and until we understand our history, how can we pass anything on to our children?" Hillman said. "That's one thing I want to do. I want to bring encouragement, to bring a voice to those people who came before me."

The newly opened museum is decorated with photos of historic figures and events as well as news clippings from the past. The grand opening included food, music and many who sang Hillman's praises.

"Mamie Hillman is a hero," said Macky Alston, a co-director and co-producer of the film "Acts of Reparation." "Twenty-six years ago she knew, because of people who taught her and said to her you have to help us keep the stories of our community, to open Greene County African American Museum."

However, honoring those forgotten didn't stop at just the grand opening of the museum. Following the celebration, those in attendance moved to the Penfield Cemetery.

The picturesque Penfield Cemetery is the resting place of the founders of Mercer University. But across a stone wall that outlines the back of the cemetery lies a Black cemetery covered in overgrowth and fallen trees. 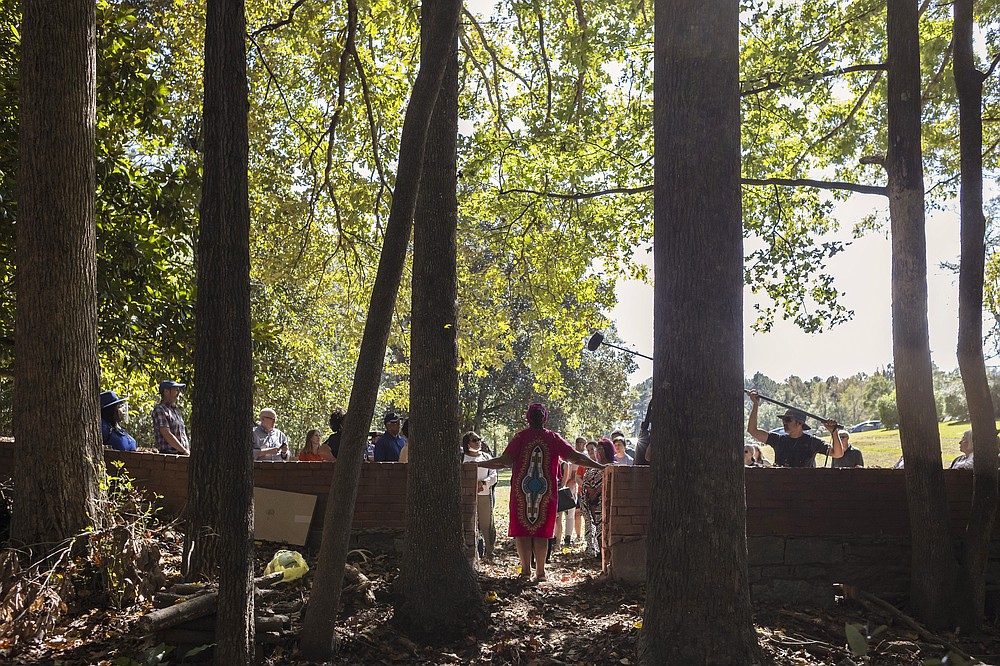 Mamie Hillman stands at the opening of the wall that once divided where Black and white people were buried at the Penfield African American Cemetery in Greene County, Ga., on Oct. 16. (Athens Banner-Herald/Kayla Renie via AP)

Some graves were marked by headstones or markers, while only a depression in the ground signified many other resting places.

Surrounded by friends, family, officials from Mercer University and members of the community, Hillman spoke to the importance of honoring all of those forgotten.

In attendance was James McWhorter, whose great-grandmother was one of the many buried in the Black cemetery. McWhorter said he was introduced to the cemetery through Hillman and Alston.

"We made a trip in the fall of 2019 and I was able to find my great-grandmother's headstone," he said. "It showed the day she died and the day she was born.

"It's one thing to see someone's name on paper," McWhorter continued, "but when you actually see the gravesite, it really says this was a living soul; this person really lived and because of her I'm here today."

Hillman has also initiated an effort to restore the cemetery alongside Mercer University and members of the community. And as part of the ceremony, a chunk of the wall was removed to allow access to the site. 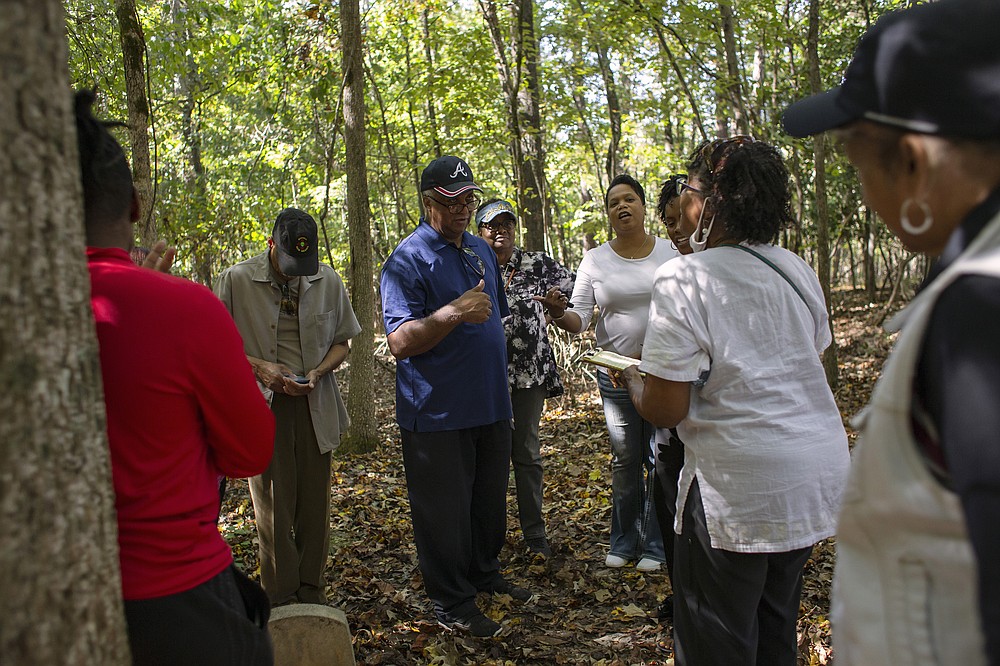 James McWhorter (center), along with friends and family, pays his respects to his ancestors buried at the Penfield African American Cemetery in Greene County, Ga., on Oct. 16. (Athens Banner-Herald/Kayla Renie via AP)

Lucas Johnson, a member of the On Being Project, a nonprofit media and public life initiative, said Hillman is someone who is really trying to help people understand who they are and what a community can be.

"Part of this is by recovering the past and helping us face our history and understand the work we need to do to be a better community for one another," he said.

Johnson, a Mercer University alumnus, said his college would host trips to Penfield Cemetery, but he was unaware of the Black cemetery across the wall. On one hand, he wants the entire wall removed, Johnson said, but on the other, it was a powerful symbol.

"There's just a little path we can walk through to see the truth," he said. "Just a little window between these barriers we erected between each other and between our lives."

Alston, whose ancestor was the first president of Mercer University, said as a kid his family would come out to Penfield Cemetery, unaware of the forgotten history across the wall.

"As little kids, the fun game was to crawl along the wall on the cemetery," he said. "What I only learned with Mamie was that there's a lost African American cemetery across that wall. So the child's play was so near that history and we were oblivious."

Alston said thanks to Hillman's work, many have been able to connect with their family members resting on the other side of the wall.