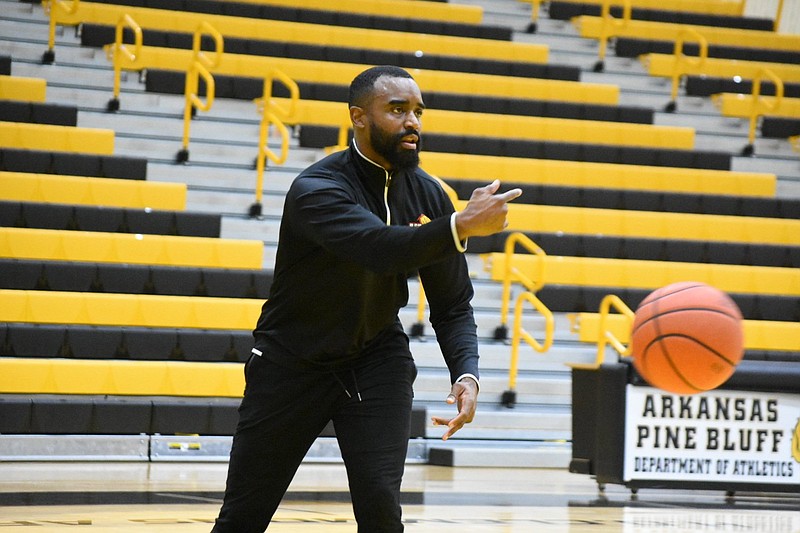 If anyone is familiar with the confines of CHI Health Center Omaha, it's Solomon Bozeman.

The first-year University of Arkansas at Pine Bluff men's basketball coach was an assistant at Oral Roberts University two seasons ago when the Golden Eagles lost 72-60 to host Creighton University at the Bluejays' home arena.

It wasn't a loss to entirely feel bad about. Creighton was ranked seventh in the country and shared the Big East Conference regular-season title with Villanova University before covid-19 halted the season during conference championship week.

Tuesday night, Bozeman will make his head coaching debut against the Bluejays (22-9, 14-6 Big East last season), who finished second to Villanova in the Big East and lost to national runner-up Gonzaga University in the NCAA Sweet Sixteen.

As for the environment inside the downtown Omaha, Neb., arena, Bozeman knows what to expect.

"It'll be my first Division I game as a head coach in front of 17,000 fans, so it's going to be fun and exciting," Bozeman said. "Jumping into the head coaching seat, it'll be a little different, but it's all basketball."

Bozeman will try to replicate with UAPB what he experienced a mere eight months ago with ORU, when he helped the Golden Eagles take the nation by storm and reach the Sweet Sixteen against the University of Arkansas.

Bozeman said during his introductory news conference in June he does not want the Lions (4-21, 3-13 Southwestern Athletic Conference) to settle for blowout losses, but he knows the Bluejays, who are going into their 12th season under Greg McDermott, are perennial powers for a reason.

"They are well-coached," Bozeman said. "Coach McDermott has been around for a long time. They execute their stuff on offense. They run their stuff with pace. It's a new team, but they have a lot of kids ranked in the top 50 to top 100."

With three 2021 All-Big East performers no longer on the roster, the Bluejays will begin the season unranked after finishing last season at No. 19.

Bozeman praised the depth of his ballclub but said he hasn't yet settled on a starting five.

Bozeman said junior transfer Amadou Fall will miss at least a week of action with a knee injury.

• What: Season opener for both teams