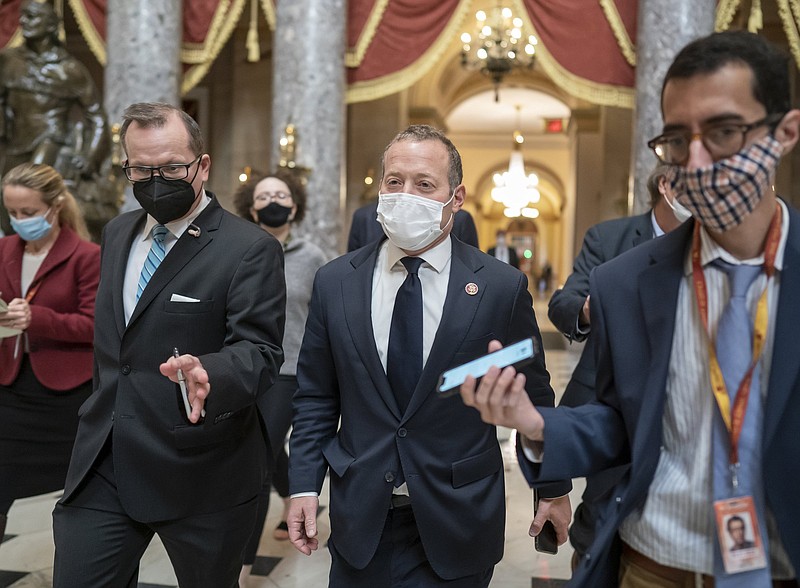 Reporters try to get an update from Rep. Josh Gottheimer, D-N.J. (center) about his concerns as the House considers President Joe Biden’s $1.85 trillion-and-growing domestic policy package, Friday at the Capitol in Washington. (AP/J. Scott Applewhite)

WASHINGTON -- A key moderate Democrat said he expects President Joe Biden's agenda will be fully paid for, but he still wants to see data from Congress' official scorekeeper before proceeding with a vote.

Rep. Josh Gottheimer said he's optimistic that lawmakers will have the Congressional Budget Office cost analysis of the Build Back Better Act when Congress reconvenes the week of Nov. 15. Waiting for the data has stalled the advance of Biden's agenda in the House where Gottheimer, along with several other centrists, have said they want assurances the bill is fully offset before voting.

"We need that information to move forward to do the responsible thing," the New Jersey Democrat said on CNN's "State of the Union" on Sunday. He said he expects the data "to match up with" White House estimates on the bill's cost.

House Speaker Nancy Pelosi acquiesced to Gottheimer and other moderates on Friday and delayed a vote on the bill until the Congressional Budget Office data is released, a move that irritated progressives, who say they don't trust moderates to ultimately vote for the social spending and tax legislation.

Gottheimer and four other Democrats issued a statement committing to vote for the bill if the analysis shows that it is deficit neutral. Outside estimates, however, indicate that Democrats could come up about $300 billion short.

The Penn Wharton Budget Model released estimates last week that said the legislation would increase spending by $1.87 trillion over the 10-year budget window while increasing revenues by only $1.56 trillion.

House Ways and Means Chairman Richard Neal, who wrote the portion of the bill that includes the tax increase and other offsets, says he thinks the official estimates will show more revenue-raising measures than spending.

"I wouldn't say I wouldn't categorize it as extra money, but we might have a little bit more on the edges," Neal said Friday.

Biden will visit Wednesday the Port of Baltimore and tout the just-passed infrastructure package and its effect on ports and supply chains, his administration announced Sunday.

The measure will upgrade the nation's ports and strengthen supply chains "to prevent disruptions," a news release announcing the Baltimore visit read.

The monthly survey by the U.S. Energy Information Administration is the latest marker in Biden's effort to counter high crude prices and a snub of his request to key producers, including Saudi Arabia and Russia, to increase output more quickly.

"The president is all over this," Granholm said on CNN's "State of the Union" on Sunday. "I think we'll be looking at that forecast that's coming out on Tuesday."

U.S. gasoline prices at the pump hit the highest level since 2014 last week, signaling a growing political risk for Biden amid accelerating consumer prices and supply bottlenecks stoked in part by the economic recovery. OPEC and its allies last week rejected Biden's request for a large production increase and stuck to a plan for gradual monthly output increases of 400,000 barrels a day.

The short-term energy outlook, put out monthly by the Energy Department's independent EIA, is watched closely by traders and policymakers. It provides forecasts on consumption, supply and trade and other information about oil and other energy markets.

The last survey, dated Oct. 13, projects a gradual fall in U.S. retail gasoline prices through the end of next year, including a decline to an average $3.05 per gallon of regular grade in December.

The strategic petroleum reserve, a crude stockpile of more than 600 million barrels kept underground in Louisiana and Texas for major emergencies, is big enough to replace all the oil the U.S. imports from OPEC Plus for more than a year. Speculation that Biden might deploy it sent oil prices lower last week.

Granholm reiterated that the reserve is one of the tools at Biden's disposal "and he is certainly looking at that."

A day after OPEC Plus ignored Biden's call to speed up the pace of output increases after last year's covid-related cuts, Saudi Arabia raised its official crude prices for all buyers. "OPEC is unfortunately controlling the agenda with respect to oil prices," Granholm told CNN.

Biden said Saturday he's "not anticipating that OPEC would respond" to his request to help out.

"They're going to pump some more oil," he told reporters at the White House. "Whether they pump enough oil is a different thing."

At last month's Group of 20 summit, a U.S. official said the administration is talking to other energy-consuming nations about how to press OPEC Plus to boost output. Biden told fellow G-20 leaders that energy markets need to be well-supplied to avoid undermining the post-pandemic economic recovery.

Information for this article was contributed by Laura Davison of Bloomberg News and by Jeff Barker and Christine Condon of the Baltimore Sun.